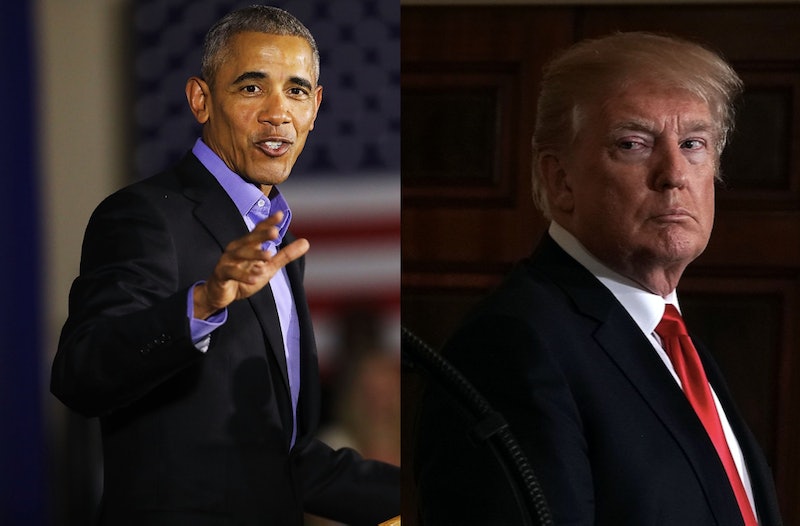 In a private speech at the Massachusetts Institute of Technology on Friday, former president Barack Obama took a veiled swipe at President Trump, boasting that the Obama White House was free of "scandals that embarrassed us. Although the former president didn't mention Trump by name, many nonetheless interpreted the remarks as a reference to the near-constant stream of scandals that Trump has faced since his swearing in a little over a year ago.

The speech at MIT's Sloan Sports Analytics Conference was off-the-record, and recording was not allowed. Nevertheless, Reason obtained and published audio from the event.

"Generally speaking, you didn't hear about a lot of drama inside our White House," the former president said. "We didn't have a scandal that, you know, embarrassed us." Obama added that "I know that seems like a low bar," prompting laughter from the crowd.

The Obama administration was indeed relatively light on major scandals, a fact that eventually earned the president the nickname "no-drama Obama." However, to say that the administration had no embarrassing scandals whatsoever is debatable at best.

The crisis at the Department of Veterans Affairs, the revelations of widespread and secret domestic surveillance by the U.S. government, the technical failures of Healthcare.gov in 2013 and the killing of an American citizen by drone strike all happened under Obama's watch, and each could plausibly be considered an embarrassing scandal, depending on who is making the assessment.

Moreover, some conservative critics might also point to the attacks in Benghazi, the ATF gunwalking disaster (also known as "fast and Furious"), the closure of Solyndra and Obama's decision to wore a taupe suit at a press conference as additional embarrassing scandals of the Obama administration. The definition of "scandal" is in the eye of the beholder; however, it would be difficult to argue that the number of Obama scandals is anywhere close to those faced by the current Oval Office occupant, which may be why the crowd laughed when Obama noted that avoiding embarrassment is "a low bar" for a president to clear.

In addition to implicitly criticizing Trump, Obama also spoke about the role of social media in American life, noting that although it's a "hugely powerful potential force for good," it can just as easily be used for evil. Obama said that social media companies therefore "have to have a conversation" and attempt to strike a balance between the public good that social media offers and the financial obligations that all for-profit companies must take into consideration.

"Our social media platforms are just a tool," Obama said. "ISIS can use that tool. Neo-Nazis can use that tool. I do think the large platforms — Google and Facebook being the most obvious, Twitter and others as well, are part of that ecosystem — have to have a conversation about their business model that recognizes they are a public good as well as a commercial enterprise. They're not just an invisible platform, they're shaping our culture in powerful ways."

Obama's comments at the speech were largely focused on sports. However, he also touched on several other political topics, including climate change, the American news media and the importance of gender diversity in the workplace.

Many who witnessed the speech or listened to the recording, however, were primarily struck by how relatively non-controversial it was, leading many to ask why it was off-the-record to begin with. New York Times reporter Kevin Draper called it "incredibly tame," while Deadspin wrote that "the most controversial part of Obama's off-the-record Sloan speech was just a light criticism of the NCAA." WEEI writer Alex Reimer argued that there was "seemingly no reason" for the speech to be off-the-record in the first place, "besides institutional arrogance."

More like this
What Is Barack Obama’s Net Worth? He Makes *Way* More Now As An Ex-President
By Hugh McIntyre
Manchester Arena Attack 5 Year Anniversary
By Ella Glover
10 Times Diana & Meghan Spoke Similarly On The Royal Family
By Sophie McEvoy
Michigan’s Governor Is “Going To Fight Like Hell” To Protect Abortion Access
By Andrea Zelinski
Get Even More From Bustle — Sign Up For The Newsletter