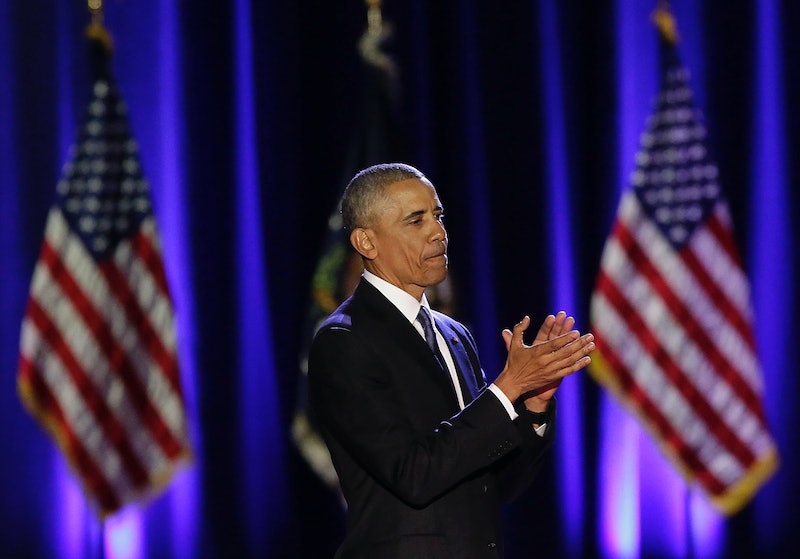 On Tuesday evening, President Barack Obama addressed the nation for possibly his final time as president. Obama's farewell address was delivered in Chicago, the same place where he gave his acceptance speech after winning the presidential election in 2008. While the city may have been the same, however, the moods of the nation at the beginning and end of his presidency could not have been more different. Where Americans were once excited about the prospect of Obama's campaign promises — among them a commitment to decreased partisanship and new healthcare policy — the crowd at Obama's 2017 speech was confronting a very different reality.

For example, the president's speech touted the Affordable Care Act as a major win during his presidency, even as a Republican-majority Congress convenes in Washington with the explicit goal of destroying the ACA. Obama leaves office with a remarkably high approval rating; his successor enters with one of the lowest in American history.

Obama only mentioned President-elect Donald Trump's name once during his speech, when he told Americans about how he promised Trump a smooth transition of power. The remainder of his address dealt with Trump only through implications. At the end of his speech, for example, Obama attempted to motivate Americans to channel their frustration with politics into action.

His words were echoed by a tweet he posted after the speech, which rapidly became his most retweeted post of all time, with over 600,000 retweets and 1.3 million likes as of this writing.

His parting words were in character for a candidate who ran on the promise of hope — encouraging Americans to believe in themselves, if not in their elected officials, and to dare to enter the political arena.

In keeping with his theme of individual involvement, President Obama also thanked "every organizer who moved to an unfamiliar town, every kind family who welcomed them in, every volunteer who knocked on doors, every young person who cast a ballot for the first time, every American who lived and breathed the hard work of change."

A recent Gallup poll said that in light of Trump's victory, 76 percent of Clinton voters were "afraid" of the years to come. It was undoubtedly a challenge — even for the hope candidate — to try to find words to inspire these frightened Americans, particularly as Congress begins its work tearing down many of Obama's policies.

It isn't a situation that calls for lofty rhetoric. In the years to come, the success or failure of Trump's and the GOP's agenda will depend on the willingness of the American people to fight for what they want. Obama's parting words to America are the tough love of someone who served in the nation's highest office for eight long years. You want political change? Roll up your sleeves.