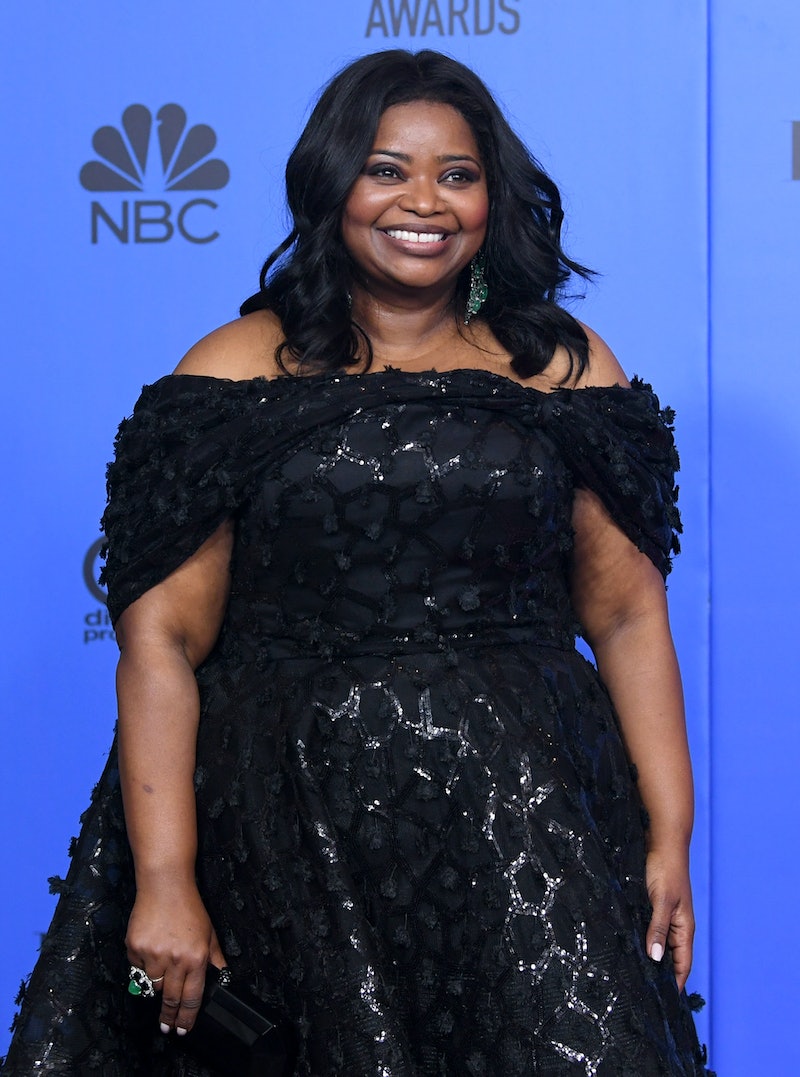 At a Sundance panel in Park City, Utah on Saturday, Jan. 26, Octavia Spencer said LeBron James helped her negotiate for an appropriate amount of pay for her upcoming Netflix series, Madam C.J. Walker. In a conversation with Kyra Sedgwick, Jenna Elfman, and Cassian Elwes — hosted by the Hollywood Foreign Press Association and Sundance TV — the actors and producers shared their views on how Hollywood has done in the past year breaking barriers, increasing representation, telling women's stories, and fighting for pay equity. Spencer, who will be starring as the titular role in Netflix's upcoming limited series, shared with the panel and the audience that at one point during negotiations, the basketball star (who is executive producing the series) "intervened" to help her get equal pay for the role, demonstrating the importance of allies in the fight for pay equity.

"I have to say, when I was negotiating my deal for Madam C.J., LeBron James had to intervene," she said. "So we need all our male counterparts to be in the fight with us." While James was not present during the panel, the star's coworkers reiterated the importance of men doing their part to promote equity in the industry. Elwes, a producer who is a co-founder of the Horizon Award which gives filmmakers who are women an opportunity to go to Sundance, discussed the newly announced 4 percent challenge, which asks stars and creatives to work with female directors (especially women directors of color) within 18 months.

In addition to the 4 percent inclusion initiative, Elwes responded to Spencer's point that men can do their part to promote equality in entertainment. "I think men are on a steep learning curve in Hollywood," he said. "I was in the middle of a negotiation, actually in the last two days, where the lawyer for the male star was saying, 'Oh, he should get paid more than she should,' and I was like, 'Absolutely not, they're going to be most favored nations in this deal, they're gonna get the same deal basically."

The panel was not the first time Spencer has been an outspoken advocate for pay equity and has empowered others in the industry to be better allies. In 2018, the Shape of Water star revealed that her co-star in an upcoming holiday film, Jessica Chastain, fought for Spencer to make five times the original offered salary on their movie, according to Variety.

Chastain and Spencer bonded over the pay injustice in entertainment, but Spencer had to educate her co-star on how these issues impact women of color more dramatically. "I told her my story and we talked numbers and she was quiet, and she had no idea that that's what it was like for women of color," she said. "Fast forward to last week, we're making five times what we asked for. Jessica Chastain believes, she is walking the walk."

Now, Spencer used the HFPA panel as an opportunity to discuss the work ahead. The Oscar-winning actor noted that while the developing conversation is promising, there's still a way to go before equity is achieved. "I'm a pragmatist, and I think that what's exciting is, for me right now, is I feel like there's a paradigm shift and women are leading the charge in that," Spencer said. "We just have to continue the momentum, and we have to remember that all of us, we need to work together, men and women. We need to advocate for each other."

LeBron and Spencer are just two of the latest Hollywood stars demonstrating how working together can make significant change toward creating a more just industry. Hollywood has historically failed to fairly compensate women, especially women of color, and Spencer has been an important voice in the movement toward pay equity. Her latest project with James just shows how powerful these conversations and collaborations can be.