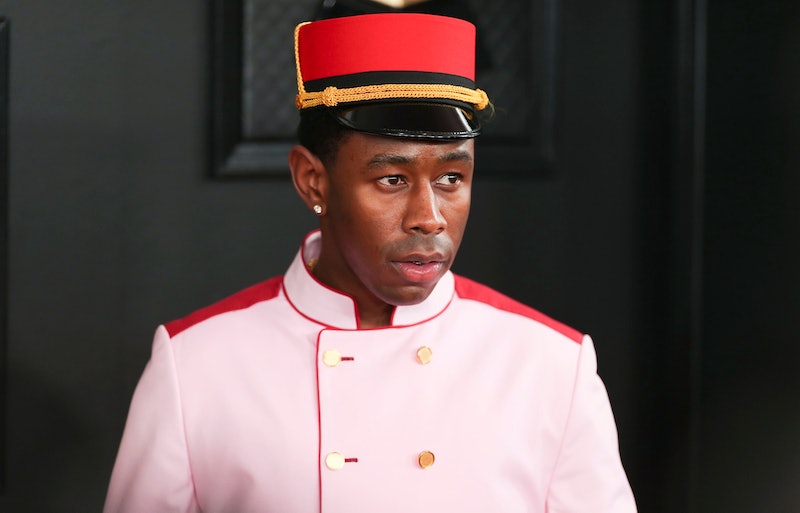 Forget the MET Gala, the Grammy red carpet is becoming the place for celebs to express their creative flair. And while Billy Porter’s retractable veil was astounding, it was Tyler, the Creator’s iconic ode to Wes Anderson and his movie The Grand Budapest Hotel that stole the show. But for those who thought this reference was an accident, think again. Ss it turns out, Tyler is a huge fan of the auteur filmmaker, and has been signing his praises for many years.

Designed by his own fashion label Golf de Fleur*, Tyler put his own spin on the lobby boy outfit donned by Zero (Tony Revolori) in The Grand Budapest Hotel. The musician decided to highlight the pink pastel colour Anderson used for the hotel itself rather than the rich purples used for Zero’s outfit in the film. This pink was complemented by red accents, with the Golf de Fleur* logo breaking up a red line down the outer seam of his left trouser leg.

Tyler accessorised the outfit with a red bellboy cap (as opposed to Zero’s purple ‘Lobby Boy’ one) and white oxfords alongside a pastel pink suitcase that contained his second outfit for the evening. As Popsugar points out, this look is inspired by something he wore in his "Earfquake" music video. All in all, the outfit was most pitch perfect ode to Tyler's filmmaking hero.

The musician first discovered Anderson around about 2013, according to an interview with music site Passion of the Weiss, and the director has been an influence on him ever since. “I love Wes Anderson so much. He’s so awesome,” he told Passion of the Weiss. “I didn’t know s**t about directing. I just knew I like to make films and place colours and do one-takes. And when I found about that guy, I was like, 'Oh my god, this dude’s awesome.'”

In another interview with Larry King, Tyler expressed how he’d like to become a filmmaker and be known alongside the likes of Anderson and Quentin Tarantino, rather than for his contribution to music.

Known for the stylistic direction of his own music videos, when watching Tyler’s more recent work, it’s easy to see how much of an influence Anderson has become. "See You Again" has major The Aquatic Life of Steve Zissou vibes, and 2019’s "A BOY IS A GUN*" is full of Anderson-esque shots and colours.

And while Tyler doesn’t particularly like using social media, as he explained to Larry King in his interview, he has posted some love to Anderson’s films via screenshots of The Royal Tenenbaums and, of course, The Grand Budapest Hotel on Instagram.

Hopefully all this love for the director will see Tyler and Anderson team up in the future. I mean, can you imagine a film directed by both of them? Now that would take aesthetically pleasing to a whole new level.