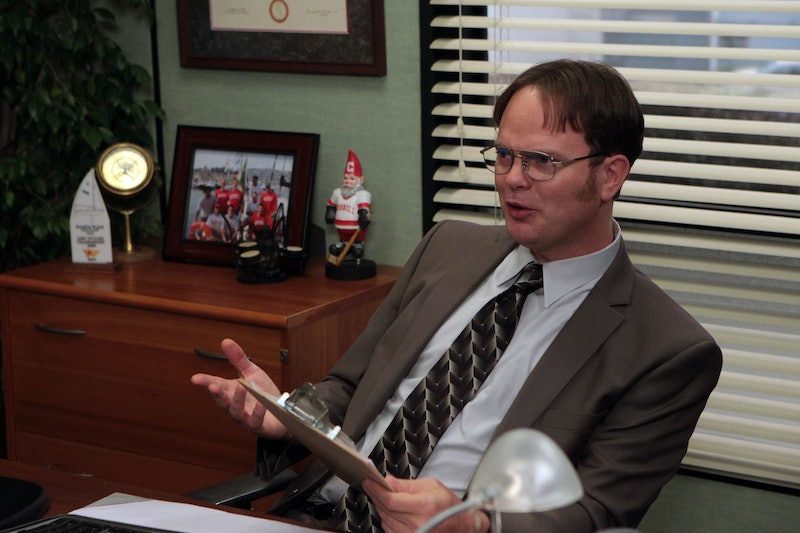 After years as assistant to the regional manager, many fans thought Dwight was the only man qualified to take over Michael Scott's title of self-proclaimed "Best Boss Ever" when Steve Carell left the show in 2011. But, according to The Office writers, Dwight didn't become regional manager because of the 2009 blockbuster The Hangover. In a excerpt from the upcoming book The Office: The Untold Story of the Greatest Sitcom of the 2000s by Andy Greene that was shared by Rolling Stone, the writers of The Office revealed why Dwight's boss dreams didn't come true in Season 7 after Michael left Dunder Mifflin. And it turns out NBC was at least partly to blame, because it reportedly didn't think actor Rainn Wilson was famous enough to anchor the show.

Wilson's character had been craving the manager position since the moment he was introduced. The role of assistant to the regional manager was never going to be enough for the ambitious Dwight Schrute. So it only seemed natural when Michael left to be with Holly in Season 7 that Dwight would be promoted and begin a beet-soaked reign of terror in Scranton. But after a very short stint in the chair, Dwight was ousted in favor of Andy. Now fans know why.

"The writers and the cast, generally speaking, were really excited about Dwight becoming the boss. It just felt correct, and that was our creative thrust," The Office writer Brent Forrester explained in the excerpt. "Mostly it was pushback from the network saying, 'Well. Is there someone more famous that we can put in here?'" Despite the writers not wanting to make creative decisions based on box office numbers, Forrester claimed, "Ed Helms had this giant advantage because of course he was in The Hangover. Not to completely read the minds of the network, but that was my understanding of how that decision got made."

When Helms joined The Office cast in Season 3, he was best known for his work as an anchor on The Daily Show With Jon Stewart, but as the lovable Andy, he quickly became a fan favorite. As a result, he was always in the running to become the new manager of Dunder Mifflin's Scranton branch. However, when The Hangover grossed more than $465 million worldwide at the box office, Helms got a leg up over Wilson, who was still best known for playing Dwight. "I think the Hangover calculus sort of shifted things toward Andy pretty quickly," writer Owen Ellickson explained.

NBC's reported desire for big name star to take over the manager role wasn't the only reason Andy edged out Dwight for the promotion. Greene's excerpt shows there were some intense debates in the writers' room over what to do after Carell's exit. For his part, writer Aaron Shure always thought Dwight was too extreme to be in charge of an office full of people. "I did not think Dwight should be the boss because I think Dwight is not as benign as Michael Scott," he explained.

But others were convinced that Dwight becoming the manager was the logical next step for a character who had grown so much since Season 1. "I think people would have been more excited to see Dwight as the boss because he’d been wanting it for so long," Justin Spitzer said. "It just seemed like it suggested more stories to me."

Although she didn't take part in the book, it seems that The Office star, writer, and co-executive producer Mindy Kaling was Team Dwight, too. In a 2010 interview with Access Hollywood, a year before Carell officially left the show, she said, "I'd love to see Rainn Wilson [who plays Dwight Schrute] in that position. Dwight has become so nuanced — you actually care about him now. I think if [we did a good job laying the groundwork] this coming season, he would be a fantastic boss."

It took some time, but in the series finale, Dwight finally got the job he deserved. Still, it's hard not to wonder what the post-Michael years would have been like if Dwight had been put in charge a little sooner.