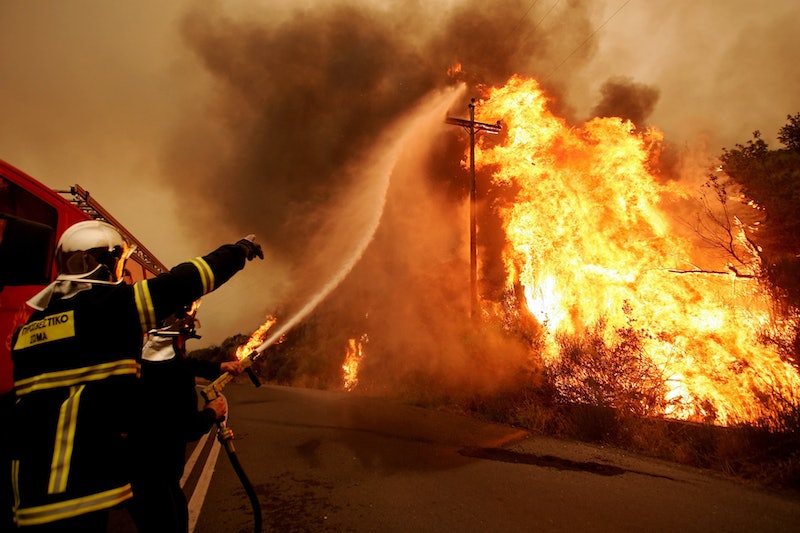 A volunteer firefighter in Ohio was suspended indefinitely last week after he posted a racist comment on Facebook. Tyler Roysdon said in a Facebook comment that "one dog is more important than a million" black people. (Roysdon used a different word to refer to black people, which I will not type here.) The Ohio firefighter's racist Facebook post may cost him his job, but that's up to town officials.

According to HuffPost, Roysdon was suspended indefinitely without pay on Thursday. Town officials released a statement on the incident, calling the Facebook comment "unacceptable." Now, Roysdon will await a Board of Township Trustees meeting, which will take place later in September, to determine what happens next.

Recently, a Franklin Township volunteer firefighter posted unacceptable remarks on social media. Upon gaining knowledge of this information, Fire Chief Steve Bishop immediately contacted the firefighter and directed the comments be removed. The firefighter was suspended without pay until the Board of Township Trustees could meet to determine a course of action. Chief Bishop does not have the authority to terminate employees. Termination of any township employee requires a vote by the Board of Trustees.

Ohio-based WHIO reported Roysdon's suspension on Thursday. According to the story, Fire Chief Steve Bishop took the most serious disciplinary action he could by suspending Roysdon. It'll be up to the Board of Township Trustees to remove Roysdon from his position as a volunteer firefighter, as all terminations of municipal employees reportedly must go through that board.

According to WHIO, Trustees President Brian Morris was "disgusted" by Roysdon's comment.

Even if you take race out of it, it still would be wrong. I’m disgusted in what he said. There is no reason for him to say that anytime, anywhere ... That should never be said.

As of Sunday, it did not appear that Roysdon himself had publicly responded to the incident. Cincinnati-based Fox 19 reportedly spoke to Roysdon's wife last week. Joei Frame Roysdon told the local news station that Tyler had supposedly apologized for his comment.

He admitted that he said things that were wrong and apologized ... Everyone deserves a second chance and is also entitled to their own opinion.

According to Fox 19, the incident also comes just weeks after the township removed a plaque dedicated to Confederate military leader Robert E. Lee. Local officials defended their decision to remove the plaque during a city meaning, as some local residents reportedly demanded that the plaque be put back in its previous place. Meanwhile, residents opposed to the plaque also spoke out, calling it a "disservice to the state of Ohio."

Franklin Township is located in Warren County, Ohio, about 40 miles northeast of Cincinnati. According to its website, the Franklin Township Fire Department serves approximately 27,000 people residing within the township's 33 square miles. The fire department contains approximately 50 on-call volunteers. No one named Tyler Roysdon was listed on the department's list of firefighters as of Sunday. Roysdon's termination will be considered at the Board of Township Trustees meeting scheduled for September 27.