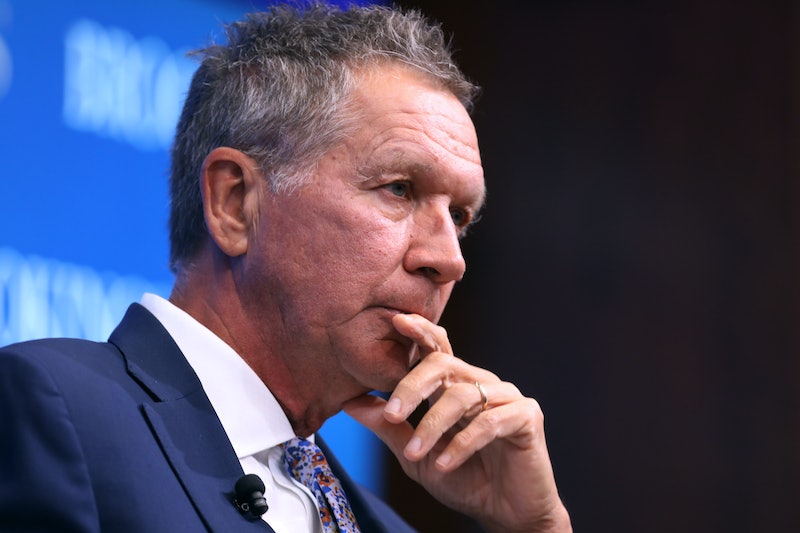 Numerous states have passed extremely restrictive abortion legislation in an effort to keep chipping away at Roe v. Wade, but those in favor of full reproductive rights will be relieved to hear that one of these attempts just failed after a gubernatorial veto and a legislature's vote to override that. Ohio's "heartbeat" bill that proposed banning abortions at six weeks of pregnancy did not get past Gov. John Kasich's veto, following votes in both the Ohio House and Senate.

The bill would have banned abortions after the point at which a fetal heartbeat can be detected, which happens around six weeks of pregnancy, according to Cleveland.com. This is extremely problematic for women, as six weeks is about the time when many women find out that they are pregnant.

In vetoing the bill, Kasich cited its likely unconstitutionality and the fact that it would cost hundreds of thousands of dollars in state funds to defend it against court challenges, according to Statehouse News Bureau. In addition to the restrictive time constraint of the bill, it also didn't offer any exceptions for cases of rape or incest. According to Statehouse News Bureau, it did contain an exception to protect the health of the mother — but doctors testified against it, partially on the grounds that they thought that exception was too vague to truly protect the women in question.

The Ohio House voted 61 to 28 to override Kasich's veto, as Cleveland.com wrote, but the veto override failed to obtain the required supermajority in the Ohio Senate. It was only one vote short, receiving 19 of the required 20 votes, with 13 state senators voting to uphold the veto. According to Ohio Senate President Larry Obhof, the Ohio legislature won't wait long before taking another crack at the bill — and this time, it's even more likely to pass.

“We will have a supermajority that is pro-life in both chambers and the next General Assembly that will be sworn in in less than two weeks, and we have a governor coming in who has said he will sign that bill,” Obhof said, according to Cleveland.com.

Women in Ohio didn't get off easily even with Kasich's veto, however. Even as he vetoed the heartbeat bill, Kasich signed a bill into law banning the dilation and evacuation (D&E) abortion procedure, with the only exception again being the life of the mother, as CNN wrote. According to The Hill, 95 percent of all second-trimester abortions rely on the D&E procedure, so the new law will effectively ban second-term abortions for many of the women seeking them. And according to Cleveland.com, the law comes with ample deterrence for physicians who might otherwise be able to perform the procedure: fourth-degree felony charges, fines, and up to 18 months in prison.

Iris Harvey, president of the Ohio branch of Planned Parenthood, praised Kasich for vetoing the heartbeat bill while at the same time condemning his decision to sign the D&E bill into law, according to WOSU Public Radio.