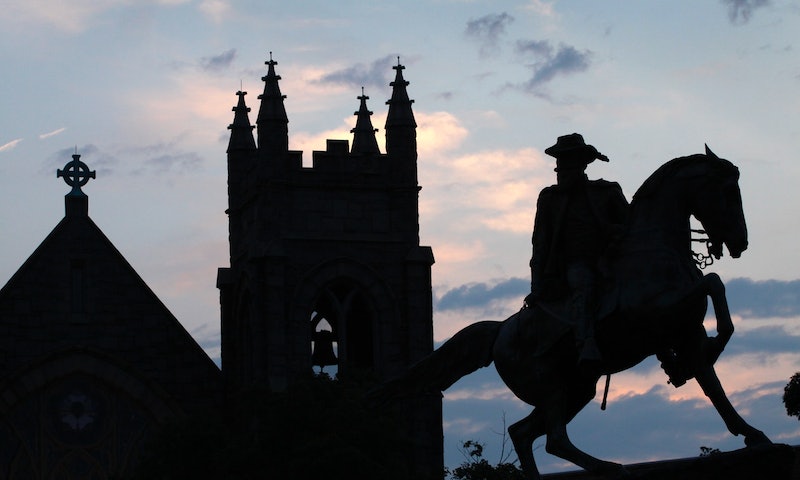 After the violence in Charlottesville, Virginia, turned deadly and cities began removing monuments dedicated to key Confederate figures, officials in Franklin, Ohio, have decided to reinstall a Confederate statue that was dedicated to Robert E. Lee after it was already removed earlier in August. News reports of the decision were roundly lambasted on Twitter. People were confused by the decision to reinstall the monument, especially considering more than 300,000 people from Ohio fought for the Union during the Civil War.

Installed in 1927, Lee's monument was removed by a city crew overnight on Aug. 17 after the white supremacist rally in Virginia. The statue used to sit on Dixie Highway in Franklin and is owned by the Daughters of the Confederacy. When Franklin decided to tear the statue down, locals were reportedly angry at the news.

“You can’t erase history. Next thing you know, they’re going to be burning books,” Jo Ann Powell, a Franklin resident, told USA Today in August. “No one alive today was a slave or owns a slave. What’s the big ordeal?”

“Call me a coward if you want to,” City Manager Sonny Lewis said during a town meeting in August. “I would rather be called a coward than be standing up there two days later lighting candles at the memorial for somebody who’s gotten hurt or killed.”

Franklin also paid $2,000 to repair the statue when it was damaged during the removal. Township Trustee Brian Morris said that the town still hasn't decided where the marker would be placed.

Back in August when the Robert E. Lee statue was removed, someone placed a sign where the monument used to sit. The sign read: "We do not negotiate with terrorists." It also called Black Lives Matter a "terrorist organization."

Twitter seemed to be genuinely confused at the decision to reinstall a statue of a Confederate general when Ohio sided with the Union Army during the Civil War. The national debate surrounding Confederate war statues focuses on whether or not the monuments honor American history or if they perpetuate white supremacy.

The Lee monument is owned by the Daughters of the Confederacy, which tried to push a revisionist history about the South by having multiple Confederate statues erected throughout the country in the 1920s.

While many Ohioans lost their lives fighting for the Union, and the cemetery across the street from the monument is filled with soldiers who died fighting Lee's army, the Confederate monument reads: “In loving memory of Robert E. Lee."

The statue was situated on the Dixie Highway, which connects the Midwest to the South. The Daughters of the Confederacy advocated for dedicating the highway to Lee when it was created in 1927.

Ohio Wasn't Part Of The Confederacy

After the violence that broke out during the Charlottesville rally, over 661 people signed a Change.org petition to remove the Robert E. Lee statue, describing the monument as a "celebration of slavery and hate." Residents who were angry that the statue was going to be removed, however, then staged a demonstration with guns and Confederate flags.

A 2016 report from the Southern Poverty Law Center identified 718 Confederate monuments and statues throughout the country and nearly 1,000 monuments can be found in 31 states, according to USA Today. At least 61 Confederate symbols have been removed since 2015, with people who oppose the decision claiming that taking down the statues attempts to erase heritage and a pivotal time in American history.

Those who want to take the statues down say that Confederate statues are symbols of white supremacy and were created to perpetuate racism during the Jim Crow South.

Whether you support the decision to reinstate the statue or think someone could use a history lesson or two, the news has definitely caused a stir on Twitter.