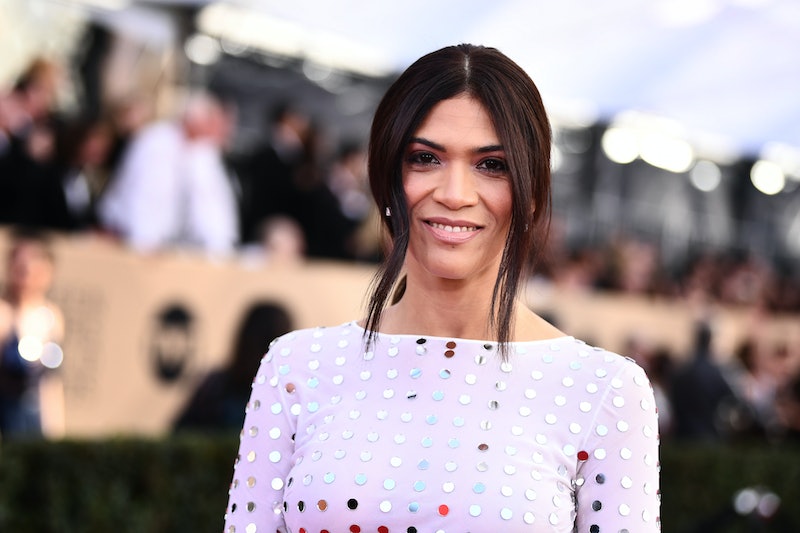 Spoilers Ahead for Orange is the New Black Season 7. Over seven seasons of Netflix's Orange is the New Black, Blanca Flores, played by Laura Gómez, evolved from a devil-cursing minor character to one half of a major, fan favorite love story. As it turns out, that "diablo" she was cursing also turned out to be the nickname of her soulmate, Dario, who waits for her, flowers in hand, as she's released from prison in the Season 6 finale. Instead of joining him, she's immediately cuffed by Immigration Customs and Enforcement and thrown onto a bus. The final season of OITNB finds Blanca in an ICE detention center just down the road from Litchfield Max, trying to find a way out — and back into Diablo's arms — with all odds stacked against her.

In an interview with Bustle, Gómez says she's just as amazed by Blanca's evolution as fans seem to be. When she was given the role seven years ago, she had no clue she would eventually deliver one of the show's most impactful messages: the story of a detained immigrant in Donald Trump's America. In retrospect, she's grateful to have contributed to a conversation that's so close to home for her — even if it's through the plot of a semi-fictional show.

While escaping the 24-hour news cycle and hot, political Twitter takes these days seems impossible, it's also very easy for most people to disengage or disconnect from the news when it gets to be too much. "People have to keep living their lives or shelter themselves from reality, right?" Gómez says. "Then comes their favorite show and gives them a dose of reality," she adds.

It's not a bad way to get a message across. Gómez adds that she hopes the depiction of Blanca's dehumanizing time in ICE detention will bring "another level of awareness" to people who are not fully engaging in the onslaught of news about immigration policy every single day. Fans were initially drawn to the series because of the characters and the show's ability to take on big, massive topics like criminal justice reform, police brutality, sexual assault — you name it — with nuance and a little humor. Before it leaves Netflix for good, it would have rung false for OITNB to not dig into current events.

"The current administration is definitely attacking and demonizing immigrants in ways that it feels like we're back in Nazi Germany, and and it's still on a level of where people can still handle it and not fully necessarily be aware of or not completely want to look into," she says. "And I think that this whole season has decided to deal with it, to deal with it directly. Not around it."

After fielding such a huge influx of support for Blanca's Season 6 ending, Gómez, who is an immigrant herself, took the opportunity to share stories of real immigrants. She started a series on her Instagram called #ImmigrantStoriesByLauraGomez, where she shares a new immigrant or immigrant family each week, detailing their journey and, more importantly, the positive impact they have on American society.

"It was my way of putting a positive light into these lives, and hoping that when you see something like that, then all your stereotypes and misconceptions are somewhat challenged, right? Because I thought, well, if they're following me, and if they're following the show, obviously, they are being exposed to something else, but maybe they just watch Fox News and that's, you know, all the information they get," she said.

"It was like a way of being a part of the resistance without making it too political and more human. It's like what we have done with the show, right? But on a personal level. So it's something that started and I'm just exploring it and continue to do it. And I do it every week, and it feels like also using social media in a more conscious way," Gómez adds.

Gómez uses her personal time to continue advocating for marginalized people, writing, directing, and spending time with a women's theatre writing group. She says they're all her ways of healing through the arts, "and hopefully changing this patriarchal society of ours one step at a time."