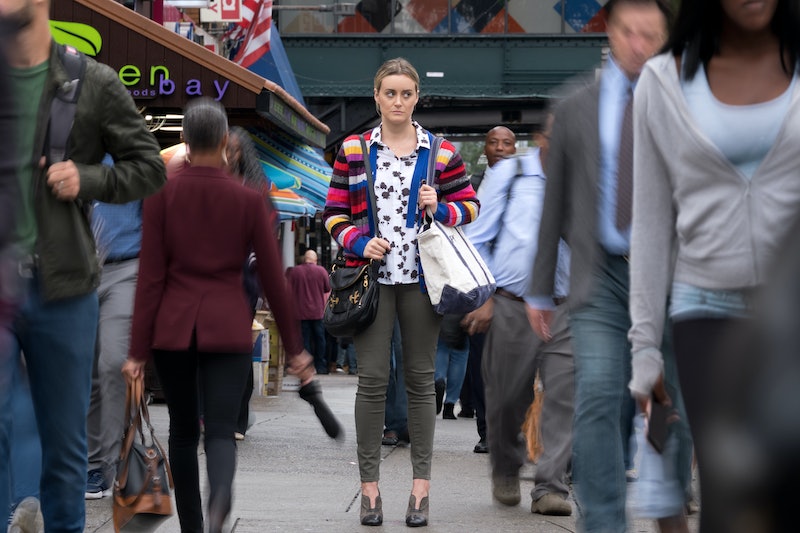 While it may be the final season of Orange is the New Black, it's the start of a new chapter for its lead character Piper (Taylor Schilling). In the trailer for OITNB's final season, released Wednesday, June 26, all of your fave Litchfield ladies are showcased. Fans get their first look at Piper free from prison, and a glimpse at how the inmates within it are remaining hopeful.

In October 2018, series stars including Schilling, Laura Prepon, Uzo Aduba, Dascha Polanco, Selenis Levya and Kate Mulgrew emotionally announced that the award-winning Netflix show was coming to a close. While Season 7 may be its last, Piper's newfound freedom is just beginning after her release in the Season 6 finale. Considering the show began with Piper entering prison, her life outside of it will cover uncharted territory for the series (beyond early Seasons' flashbacks.)

"I recently got out of federal prison and I’m trying to get back on my feet," viewers can hear Piper saying over a montage of her sporting a lot of button up-sweater combos, making copies, and basically living your typical weekday office job nightmare (a prison of its own, on could argue). She's also taking on some not so run-of-the-mill activities like completing drug tests and shooting a bow and arrow.

While Piper gets a taste of the world beyond prison walls, the rest of the cast is coping with their existence between the confines. Luckily, most of the gang is here, including Natasha Lyonne's Nicky. (So, no worries about her ability to pull double-duty on Netflix's Russian Doll.) Danielle Brooks's Taystee is dealing with the aftermath of her Season 6 guilty verdict, which placed her back behind bars indefinitely.

Meanwhile, Suzanne 'Crazy Eyes' is delivering all of the catchphrases we'll be reciting come our binge-sesh following the July 26 premiere. When she's not gawking at chickens or exclaiming, "Oh my Gorgonzola," Crazy Eyes is casually dropping in the only motto we'll ever need for the rest of our lives. After Pennsatucky (Taryn Manning) asks Crazy Eyes, "What is it you really want?" she responds, "Ice cream...and justice." (Mint chip would pair nicely with social rights, wouldn't it?)

There's also some crossover between the lives of those at Litchfield, and those in the outside world, naturally. Piper can be seen visiting Alex after their "prison marriage." And in a blink-and-you-missed-it moment, Sophia (Laverne Cox) can be seen doing the former inmate's hair at a salon. "Maybe this is the beginning of a road back," Piper can be heard saying in the trailer. "There's gotta be a way back."

In that same vein, this trailer is a lot more positive than people may be expecting, following a pretty dark finale last season. Upbeat music plays, there are hugs and laughter, "Giving up is not the answer, we have to find our own answers," one character says in voiceover.

Fans of OITNB have been through a lot over the course of the series, and there's no doubt that they could use with a little hope and sunshine at the end of the road.