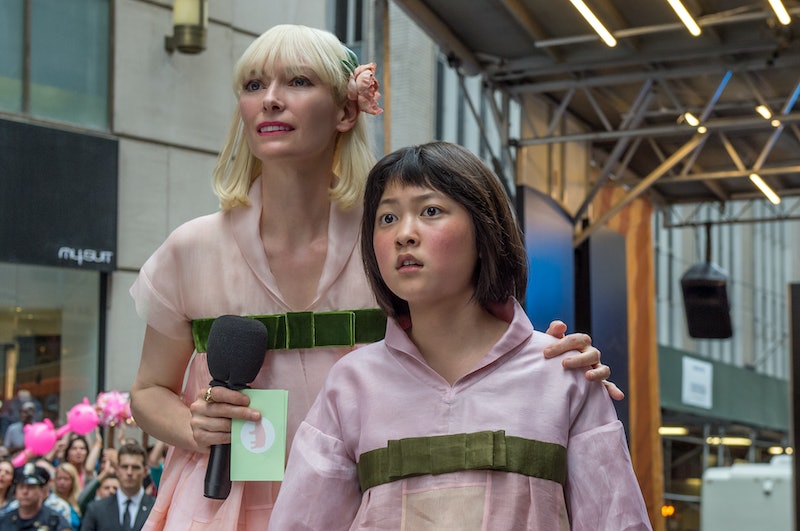 Okja, a monumental original Netflix movie, brings to the table a plethora of important ideas, about our methods of food production, the role of corporations in our daily lives, and animal rights. But one of the biggest themes of Okja, the idea of global unity, is both a cause for celebration as well as a warning to audiences. The thought that people of various backgrounds can come together for a common, good cause regardless of language or cultural barriers is great — the potential downfall, though, is that this push for unity can ultimately end up doing more harm than good if we succumb to selfish impulses or willfully misunderstand one another.

Okja's international outlook is undeniably exciting. The cast is a mixture of English, American, and Korean actors; locations span continents, with the primary places being South Korea and New York City; and the languages used are also a mix of Korean and English. Furthermore, to see this kind of representation is celebratory at a micro level, where a Korean teenage girl — rising actor Seo-Hyun Ahn — leads a cast of international stars, including Tilda Swinton, Jake Gyllenhaal, and Paul Dano. It's refreshing to see this cast and this story working in such a globally-minded way in 2017, a time in which a rising focus is on pushing films and TV shows to have more inclusive casting and more globally-minded stories. But global unity, while ideal, is shown to have potential dark effects, too, in Okja.

Spoilers ahead. In the film, the Mirando Corporation involves farmers from all over the world in the international (albeit morally dubious) Superpig project. aka Okja. The Animal Liberation Front (ALF) makes an effort to keep their approach to saving animals global too, bringing their anarchic approach to animal liberation to South Korea and Mija. Lucy Mirando's PR push to involve Mija in Okja's introduction to the world is done with fuzzy feelings of global unity as the subliminal ethos. Even Mija's willingness to learn English after K advises her to do so shows that she is thinking globally; in order for her to get Okja back, she must take on a new language and assimilate.

Yet the downside of global unity is exemplified in Okja's use of language. The movie argues that an ignorance of another person's language and their culture can indicate an ignorance for the common good of everyone. To brashly fight for your own values rather than the values of the community is a severe negative here. And as seen in the film, this kind of ignorance at various levels has devastating consequences.

In one crucial moment early on, as the ALF introduces Mija to their plan, K purposefully mistranslates Jay's words about how they want to let the Mirando Corporation get their hands on Okja so that the ALF can truly expose those at Mirando for the monsters that they are. When asked, through K, what Mija wants to do, she tells K she wants to take Okja back to the mountains. K then tells the ALF team Mija agrees to their plan.

The willful mistranslation of Mija's desires directly affects Okja's safety (when she finally arrives at Mirando's Paramus, NJ warehouse, she is sexually brutalized by another superpig), sets the ALF back in their own work towards freeing Okja, and leads Mija down a perilous path to New York City and later, to the factory where she has to save Okja from being murdered.

Of course, the fact that there can be consequences to unifying internationally is not an endorsement for xenophobia or jingoism. Within the confines of the film, it's understandable to see how this mistranslation happened. But in real life, it's instructive to viewers to see that this kind of micro-translation has happened and can continue to happen; and if it does indeed keep occurring, similar disastrous events may happen. That's why it is important for everyone, everywhere, to begin emphasizing understanding and listening to one another more strongly.

Okja makes it clear there's nothing to fear about global unity when it's done in a considerate, respectful manner. The movie may warn, that ignorance or an unwillingness to work together can lead to disastrous outcomes, but if we are going to keep moving forward with our focus on global unity, working together and listening to one another is going to be essential.