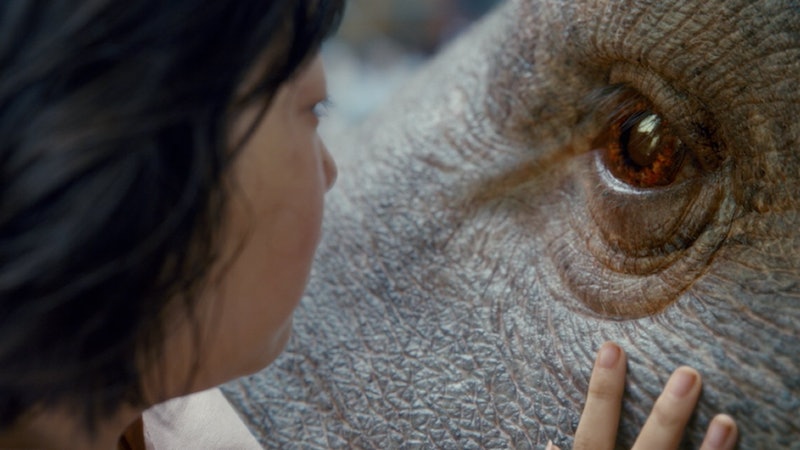 Netflix continues to add original prestige films to their lineup, and their newest offering might be their biggest get yet. Okja is the latest film from Korean filmmaker Bong Joon-ho, and the movie received a very warm reception at this year's Cannes Film Festival. The film is about a little girl and her friend, a giant monster named Okja, who looks like a cross between a hippo and a giant puppy. But since it's technically a monster movie, is Okja scary?

It's definitely not meant to be scary like a horror movie. Okja is big, but he's not frightening. He's actually pretty cute, and he's the best friend of a little girl. There's nothing inherently threatening about him. However, he can still wreak havoc when he gets angry due to his size, but his actions are always justified. There's a chance that some little kids could be scared of Okja, but no adult will be scared of the movie (and the film's not meant for little kids anyway, more on that later). The closest comparison I can think of is E.T. The character design of E.T. wasn't meant to be scary, but he still creeped out a lot of little kids, and Okja could potentially have the same effect. But like in E.T., the scariest creatures in Okja are actually the humans.

In E.T., the government wanted to experiment on E.T., which made for some pretty frightening moments. In Okja, the government has been replaced by a ruthless corporation, who wants to use Okja as a new form of livestock (they actually created him a decade earlier). That in a way is even more frightening than what happened in E.T., since nobody in that film was trying to eat the alien. Both films also feature a young best friend for their titular monsters, but the main difference between the movies comes in their target audiences. E.T. is a family movie, while Okja is aimed strictly at adults (there's even an f-bomb in the trailer so there's no confusion).

The Mirando Corporation, and their sadistic CEO (Tilda Swinton), are the real things to fear in the film. Their greed knows no bounds, and if you're an animal lover then you will likely become quite uneasy in watching as they attempt to turn Okja into the world's next favorite meal; bioengineering an animal specifically to be slaughtered and consumed. It's fairly disturbing, and clearly makes a case for veganism, and while it isn't scary per se, it might give you an uneasy feeling that's not unlike what you might experience while watching a horror movie.

Okja is not a horror film, but it's not for kids, either. It's a hard film to classify, in that it's a monster movie where the monster is probably the least scary thing about it.