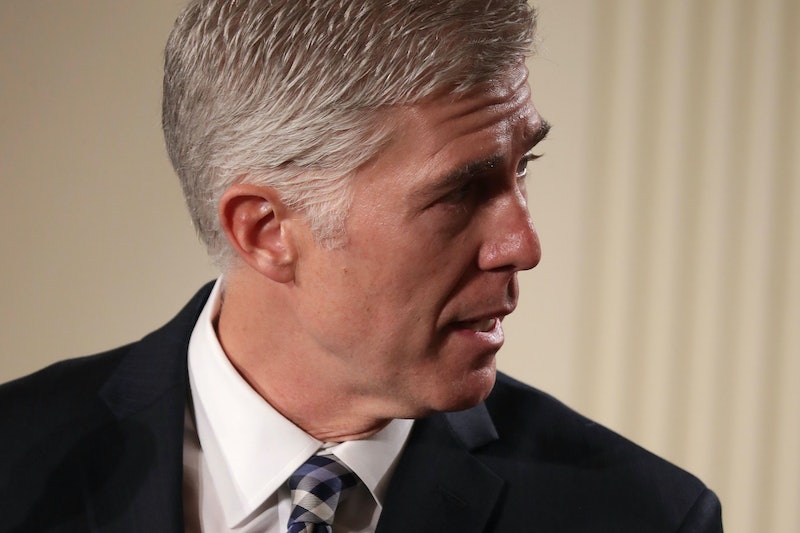 With his nomination to the Supreme Court, Neil Gorsuch will be a regular fixture of news headlines for a while, especially considering the fate of his unlucky predecessor. Many Democratic senators are vowing to throw the gauntlet down over Gorsuch's confirmation, a play of righteous vengeance over Republican obstruction in getting a hearing for Obama's Supreme Court pick, Merrick Garland. Partisan maneuvering aside, Neil Gorsuch's history as a lawyer, judge, and adjunct professor will no doubt hit the spotlight for several weeks (quite possibly months) to come. Rather than dwell on the current Neil Gorsuch, a look at what photos and information are available about his younger years seems like an interesting place to start in understanding the man who may very well become America's next Supreme Court Justice.

Gorsuch grew up in Colorado (the state where he also currently resides), and comes from a family steeped in the legal profession. Both his mother and father were lawyers, as well as his grandfather. They must have liked their day jobs, or at least made the work seem reasonably interesting and worthwhile, because Gorsuch followed right in their footsteps. He graduated from Harvard Law school, and earned a degree from both Columbia and Oxford as well. In a traditional sense — that of having the "right pedigree" — Gorsuch's credentials are unassailable.

In his 1988 Columbia yearbook, Gorsuch chose a quote from Henry Kissinger to put beside his photo: "The illegal we do immediately, the unconstitutional takes a little longer." As a 21-year-old headed to law school, it seems reasonable that this was deliberately tongue-in-cheek. Putting that aside, Kissinger is none-too-popular a figure these days. (Remember the heated debate exchange between Bernie Sanders and Hillary Clinton over her friendship with the foreign policy strategist?)

Kissinger is controversial for a number of reasons, disliked by some on both sides of the political spectrum for his interventionist policies and sometime support for brutal dictators. How much of that history worked its way into the opinion of a young man barely old enough to buy alcohol is not really an answerable question.

Before heading off to college, Gorsuch attended Georgetown Preparatory School in Washington, D.C. His mother, Anne, had to move to the capitol after receiving an appointment from President Reagan to head up the Environmental Protection Agency (EPA). She was later forced to resign, after refusing to hand over documents relating to a scandal surrounding the cleanup of toxic waste sites. She claimed the documents were protected by executive privilege.

While at Georgetown Prep, the young Gorsuch seems to have had quite the penchant for provocation and youthful antics. He apparently started a "Fascism Forever" club in response to what he perceived as predictable and unified liberal views from the teaching staff. After the Daily Mail ran with a breathless title, but offered no comment on whether or not the club's name was meant to be taken literally or ironically, Twitter went berserk.

It seems clear to me that anyone attending Georgetown Prep and Columbia University who harbored actual fascist ideas would probably be smart enough to keep them under wraps. Much more likely, and indeed pretty obvious, is the use of such a provocative club name as a way to elicit a laugh. Anyone regularly around teenagers can probably appreciate the point.

Gorsuch went on to graduate from Columbia, Harvard, and Oxford, and he became a judge and professor who earned the respect of both those who agreed and dissented with his legal views. Nominated to fill the seat of Antonin Scalia, Gorsuch is pictured here on a fishing trip with the former "lion" of the Supreme Court himself.

The next few weeks will be intense ones for Gorsuch, as he faces what is sure to be one of the most contentious confirmation battles in modern history. It seems that a cheeky sense of humor served the young Gorsuch well in his early years. He'll probably need it again to help weather the storm of protest headed his way. Gorsuch has been nominated by a divisive president from a Republican party that just spent nearly a year obstructing the confirmation of Merrick Garland. Whether or not he can make it out of the Senate and onto the Supreme Court bench remains an unsettled question.