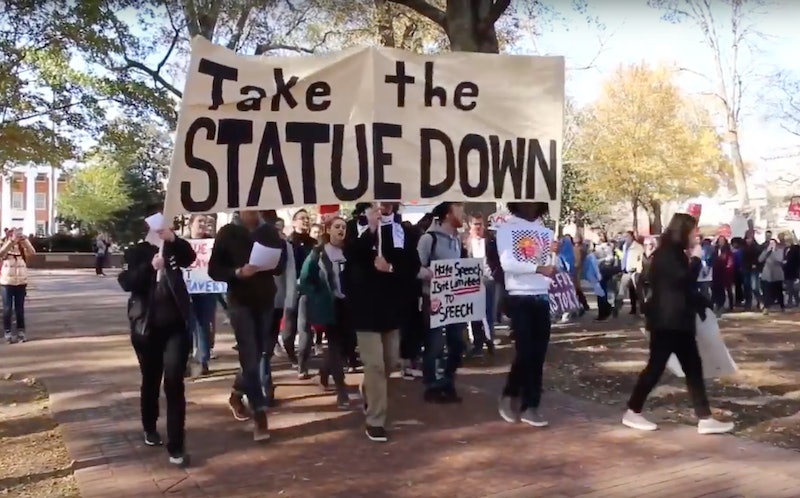 The University of Mississippi is trying to reconcile with its history, and students are leading the way. On Tuesday, Ole Miss students voted to remove a Confederate statue from the center of campus. Their proposal asked for the monument to be moved to a nearby cemetery on school property, and it passed the 47-person student government in a unanimous vote.

"This says that we are not to be written off," Jarvis Benson, a student who helped draft the resolution, told NBC News. "This shows that Mississippi has the potential to move forward in a really smart and sustainable way that crosses a lot of political divisions and partisanship."

The undergraduate students' vote is the latest step in a years-long effort by advocates to remove the statue. The graduate student government passed an identical resolution on Monday with a 15-4 majority. The faculty senate is now reviewing the proposal and will put it to a vote on Thursday.

The statue is a generic memorial for Confederate soldiers that was donated by the United Daughters of the Confederacy in 1906, according to a 2016 guide written by history department faculty. Thirty years later, the organization described the statue's purpose as honoring "heroes not forgotten," "the zeal and untiring patriotism of a band of loyal women," and "the youth of the Southland." The history faculty describe it as a legacy of the Lost Cause ideology that tried to glorify the Confederacy and rationalize its defeat.

Ole Miss' fraught history encompasses far more than one statue. According to The Atlantic, 97 percent of its student body served in the Confederate army during the Civil War. Many of the university's buildings were built by enslaved people. The school also practiced segregation after Brown vs. Board of Education outlawed it in 1954; it was only integrated in 1962, and that process was accompanied by a deadly riot.

The university still faces issues to this day. According to NBC News, black students have reported facing harassment and microaggressions. Members of the Ku Klux Klan staged a protest on campus in 2015. A white student put a noose on the statue of a civil rights activist in 2014. And last month, pro-Confederate groups descended on the town to express support for the university's Confederate past.

Meanwhile, students have determinedly sought to change the school's relationship to its heritage. In 2015, action from the student government caused the Mississippi state flag to be taken down at the school because it bears a Confederate emblem. And now there's the move to relocate the Confederate statue.

According to NBC News, activists have been encouraged by the overwhelming support that the resolution to move the statue has received. "I started crying when I knew we had the majority vote," Leah Davis, another student who worked on the proposal, told the outlet. "It was really powerful to me the fact that the senate voted unanimously."

"I think the university and this community need to hear from students that this is not something we stand for," Davis continued. "Not something we want to glorify."