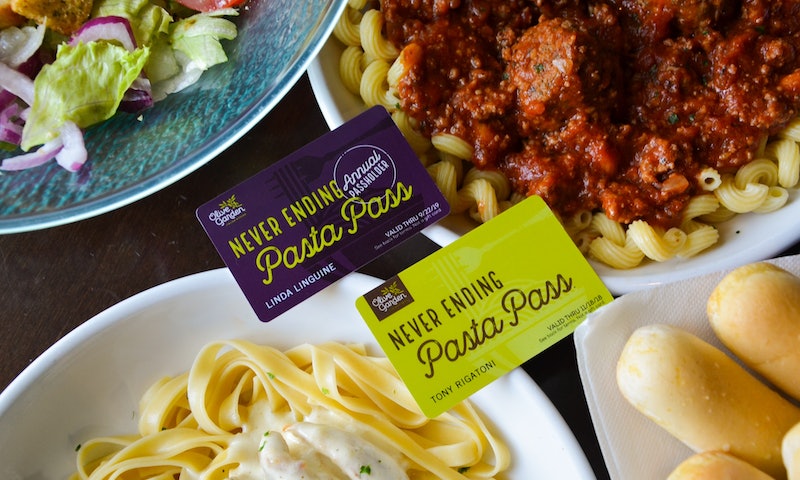 So, hey, remember earlier this week when Olive Garden launched a mysterious countdown clock on their website without telling us what it meant or why it was there? Well, now we know what it was all about: The clock was counting down to the moment Olive Garden revealed they have 10 more Annual Pasta Passes to give away to the Italian chain’s adoring public. That's quite the reveal, given that the Annual Pasta Passes fo 2018 sold out in record time. There’s a catch, though: You have to be one of the first 10 people to solve an online scavenger hunt to score one of these coveted prizes. Truly, there is no such thing as a free lunch.

Olive Garden first launched the Never Ending Pasta Pass in 2014. At the time, just 1,000 passes were released; for the… well, either low, low or not-so-low at all price of $100, depending which way you look at it, you could grab a card that granted you the benefit of receiving unlimited pasta, salad, breadsticks, and soft drinks from Olive Garden for seven full weeks. The funny thing is that, according to TIME, the Never Ending Pasta Pass was originally just a stunt meant to draw attention to the return of the Never Ending Pasta Bowl menu — and yet, it proved to be so popular that it has since become A Thing all its own. That first year, all 1,000 passes sold out in an hour and 15 minutes; in later years, however, the passes began selling out in literal seconds, despite being offered in increasingly greater numbers.

On Aug. 23, 2018, Olive Garden released 23,000 Never Ending Pasta Passes for $100 each; as in previous years, these passes are good for “unlimited servings of pastas, sauces, and toppings from our Never Ending Pasta Bowl menu, plus unlimited soup or salad and breadsticks” for a multi-week period (this time, it's eight weeks; the dates are Sept. 24 to Nov. 18, 2018, dine-in only). However, they also added something new to the mix: The Annual Pasta Pass, which grant you the same benefits as the Never Ending Pasta Pass — but for much longer: 52 weeks, beginning Sept. 24, 2018 and running until Sept. 22, 2019. Many fewer of these passes were released, however — just 1,000 — and they were $300 apiece, rather than $100.

Naturally, the Annual Pasta Passes sold out in less than a single second. Because of course they did.

But hey, guess what? You’ve got one more chance to get your hands on an Annual Pasta Pass now, thanks to that seemingly random countdown clock Olive Garden launched a few days ago.

When clicked, the link brought you to a page featuring the phrase, “IF YOU THOUGHT UNLIMITED BREADSTICKS WERE BIG...” and the aforementioned clock; the timer, it seemed, was counting down to noon ET on Wednesday.

Folks had a lot of ideas about what it might mean; could this be in our future?

Nope. Not that, thankfully. (Although, as IHOP later pointed out, despite the backlash against the “IHOB” stunt, it did its job: Everyone does, in fact, now know that IHOP serves burgers. And burger sales actually quadrupled as a result of the promo, according to Ad Week.)

What about this, though?

This guess, in fact, turned out to be closest to the truth. On Wednesday at noon, the countdown hit zero and Olive Garden made their big announcement: In honor of the fifth anniversary of the Pasta Pass and the massive interest in the brand-new Annual Pasta Pass, the restaurant chain has magicked up 10 more Annual Pasta Passes to give out to those who prove their mettle in a test of wits. A scavenger hunt launched alongside the announcement — and if you’re among the first 10 people to solve it, one of those newly available Annual Pasta Passes will be yours.

Do you have what it takes to win?

Head here to get started and find out. May the pasta odds be ever in your favor.