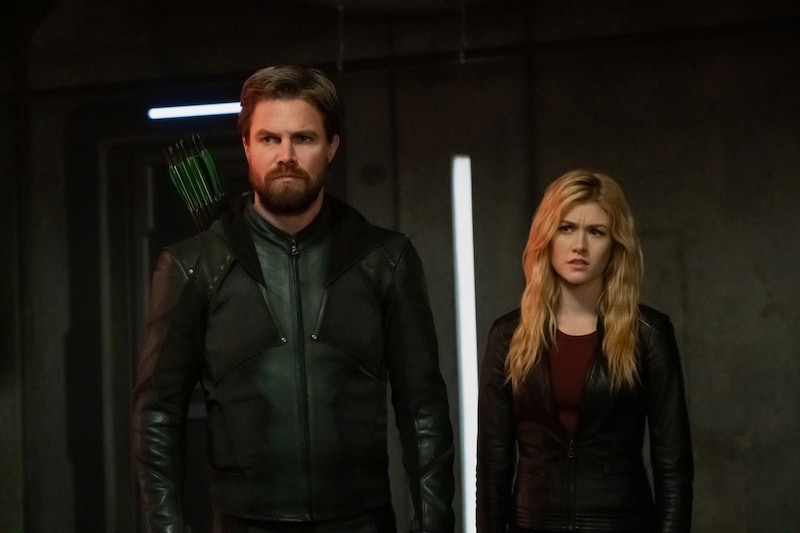 Spoilers for Supergirl's Season 5 Episode 9, "Crisis On Infinite Earths: Part 1." Though the death of Oliver Queen has been forecasted since news of Arrow's cancellation earlier this year, fans weren't expecting it to happen on night one of the long-awaited, massive Arrowverse crossover "Crisis on Infinite Earths." In fact, it happened so early on that many are convinced Oliver isn't really dead, and that he'll make an epic comeback later in the crossover.

In context, Oliver's death isn't that sudden. The Arrowverse has been building to this moment since the last "Elseworlds" crossover, in which Oliver bartered with the Monitor in order to prevent Barry and Kara from having to sacrifice themselves to save Earth in the future (which would be in keeping with the comics). And in "Crisis on Infinite Earths," Oliver gifts Mia her own outfit, saying ominously, "There should always be a Green Arrow."

These set-ups both point to Oliver dying in the crossover, which appears to actually happen in the final moments of the episode. The team gets completely overwhelmed when they storm the Quantum Tower, and the Monitor orders them to retreat. When Oliver hears that Earth hasn't been totally evacuated, though, he resists being teleported away. His bravery saves countless lives (though still not all of them), but he's mortally wounded. Surrounded by his daughter and friends, Oliver says goodbye, seemingly for the last time.

It's a noble end, but nonetheless a rather sudden one. Fans are deeply upset that it came so abruptly, and think that this can't possibly be the end for the character who kickstarted the entire CW DC Comics universe.

While this may all just be wishful thinking, there is merit to believing that Oliver might not really be gone. The Arrow portion of the crossover hasn't happened yet, after all, so Oliver might very well make a miraculous return on his own crossover episode (which is set to air in January). There are also two episodes left of Arrow after "Crisis" wraps up, and it would be perhaps a little strange to not have him appear at all in those final moments. Most tellingly, the Monitor mysteriously says that he didn't expect Oliver's death to be this way, hinting that he's not really dead at all.

With the Antimatter wave still going strong and the heroes on the retreat, here's hoping Oliver makes a comeback, because they definitely need all the help they can get.

More like this
Woodstock Co-Founder Michael Lang Faced Several Lawsuits After The 1999 Festival
By Brad Witter
This 'Bridgerton' Polin x 'Love Island' Crossover Is Everything
By Darshita Goyal
What's New On Netflix: A Third '365 Days' Movie & Lili Reinhart’s New Film
By Arya Roshanian
'Stranger Things' Season 5 Will Echo Season 1 In A Key Way, The Duffer Brothers Confirm
By Kadin Burnett and Sophie McEvoy
Get Even More From Bustle — Sign Up For The Newsletter