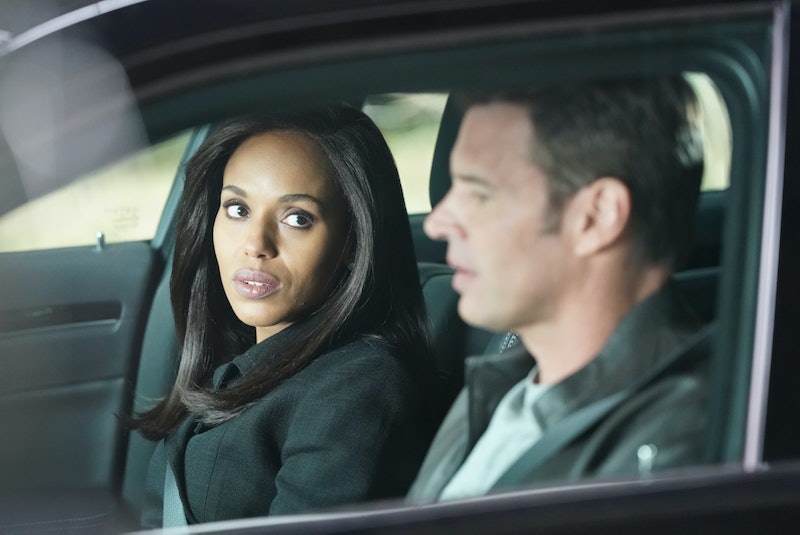 It's almost time to say goodbye to Scandal for good, and some people are having a harder time letting go than others. No, I'm not talking about diehard fans — although when the Scandal series finale airs April 19 on ABC, more than a few tears will be shed by viewers. It's actually the cast of Shonda Rhimes' political ABC drama who are already dreading having to say goodbye to seven seasons of wild twists and turns.

Bustle took a trip over to Washington, D.C., (just kidding, it was a short drive over to the Scandal set in Hollywood) to get a feel for how the stars were coping with filming the final few episodes of one of TGIT's hit series, and Scott Foley and Josh Malina couldn't help but get some jabs in at each other while waxing nostalgic on Scandal's early seasons.

"It's sad and exciting, because I want to know what the hell happens," Foley says of the upcoming series finale. "Josh is going to tell you he'll miss the paycheck, but I'm going to miss the people." And Malina confirms that by adding, "What am I going to miss the most? The money. Any one who says anything different is lying to you," he says while Foley and Jeff Perry laugh.

But maybe it won't really be goodbye when Scandal signs off with its series finale. When asked when they would start considering getting together to film a Scandal reunion, Malina immediately answers, "The day after it ends." Foley laughs, and then gets serious. "You can tell we all enjoy each other and we enjoy the work," he says. "We all feel very fortunate to have been a part of this. Should someone at some future point decide that hey, maybe we'll get the old gang back together, I think pending availability issues, I don't think there's a person in this cast who wouldn't jump at it."

And Malina adds, "I'll be available."

The loyalty between all the cast members and the rabid fanbase means that Scandal could have pulled a Grey's Anatomy and just kept churning out new seasons until the world ends. But according to Perry, Scandal is ending this season because of what happened during the 2016 presidential election.

"Shonda has said publicly and we all know her political leanings, she was a very big Hillary supporter and she was very dismayed at that loss," he says. "She said, 'Look, writing cautionary political tales when you know the lights are going to come back on is one thing. When you're not sure if the lights are going to come back on, it's another. I need to recalibrate.' She went about doing that for a couple months and then called us and said, 'Okay, I've got a path in my head of what it now needs to be and where it needs to end. It will be this season.'"

He adds, "We can't out-crazy reality and that's what we were doing. It became impossible." While Rhimes knows how she's ending Scandal, with only a few more episodes left to film this season, when we speak on set, none of the stars know what that ending will be.

"We're waiting to be surprised as well," Bellamy Young says, sitting on the desk in the Oval Office set next to Kerry Washington and Katie Lowes. "We're dying to know. We're fans like that too."

Lowes, whose character Quinn's fate was left up in the air in the midseason finale, has always had a feeling that no one will be able to predict what Rhimes has in mind for the series finale. "I really feel like the ending is not going to be what anyone expects," she says. "I really don't know if people are going to be satisfied in whatever way it means to them."

But Washington knows that the series finale "will satisfy Shonda." "Which is how it's been from day one," she says, leaning against the president's desk. "It's always been the unexpected and if it ended any other way I'd be disappointed in that. I want to be surprised and shocked."

Standing in the Situation Room set, wearing a suit and looking very presidential despite Fitz no longer being the leader of the free world, Tony Goldwyn admits that he's "relieved" that Scandal is ending this year.

"Season 7 feels right for our story," he says. "I'm really grateful that we're going to finish strong. It's a real gift. All good things do come to an end and the grieving process is part of it."

He is, however, "very upset" that his character isn't POTUS anymore, since he was really getting used to the power and prestige that bled over into real life.

"Every time I walk into Mellie's office, I'm like, this is prettier than mine was! Her couch is more comfortable! Honestly, it's really weird," he says with a self-deprecating laugh. "It sounds absurd but you really get used to being president. People do treat you differently when you play the president on television." He admits that he first thought it was "so bizarre" ... until he "got comfortable with it."

"So now that it's being taken away from me, it's an adjustment," he says with another laugh. "In the real White House, we were doing a private VIP tour and there were White House staffers going by and I heard them going, 'The president's here!' And I'm like, where? Where is Obama?! And then I was like, 'Oh my god, they're talking about me!'"

Now that Fitz has a lot of free time on his hands, will he be good enough to wear a white hat when Scandal airs its series finale? "Fitz is trying," Goldwyn says. "He's behaved very badly and he's trying to redeem himself." As for the other characters, no one knows if they'll be wearing a white hat by the end of Season 7 on screen, but thanks to a cast gift from Washington, they'll all be able to in real life.

"Kerry gave us all a gift of a white winter skully hat," Guillermo Diaz says. And Darby Stanchfield reveals that each of the hats say "Scandal Gladiator" on them.

"So when in doubt, we can all at least put that on," Stanchfield says, adding that "it's hard to say" which of their characters will come out of the series as a good guy. "Here's a thing I can tell you, we know a few more episodes than you and there is still a lot of surprising elements and twists and turns coming in terms of characters doing good and bad, so it's head scratching in terms of how it's going to actually end." If not even the Scandal stars can predict how the show is going to end, there's no chance anyone else besides Rhimes can. So let's all just sit back and enjoy this final ride.

More like this
Why Wasn't Teddi At The 'Bachelor In Paradise' Reunion?
By Brad Witter
The ‘Emily In Paris’ Season 3 Trailer Teases Major Career & Love Crossroads For Emily
By Bustle Staff
Jenna Ortega Wanted To Redo The 'Wednesday' Dance Scene For A Controversial Reason
By Grace Wehniainen
This Tiny Clue In 'Wednesday' Foreshadowed That Season Finale Twist
By Grace Wehniainen
Get Even More From Bustle — Sign Up For The Newsletter