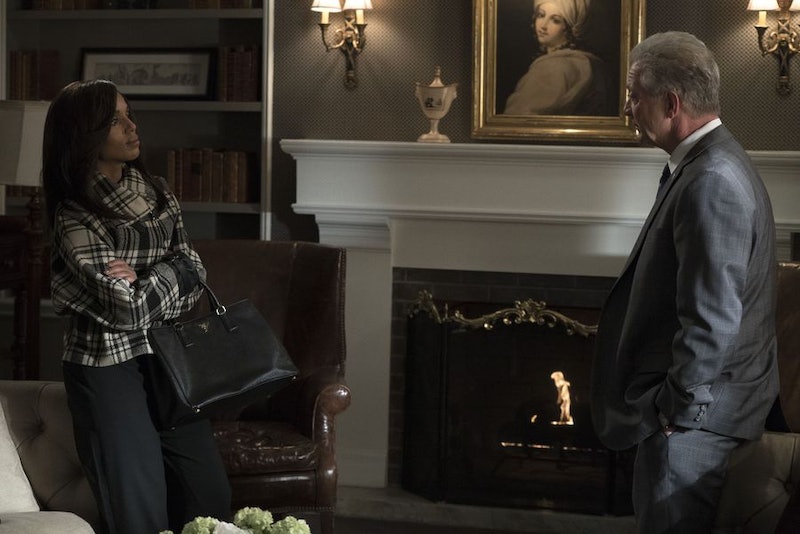 Spoilers ahead! Just in case you thought Scandal was going to slow down the closer we get to the series finale, Thursday night's new episode should clear that right up for you. Olivia quits the White House on Scandal, but that decision doesn't come to her easily. In fact, it seems like Olivia's decision is set off by the one thing fans have been waiting to see for the past few episodes: finding out that Quinn is actually still alive.

After Mellie had announced that Jake is going to be stepping up, Olivia is on the warpath, and her white hat days seem to really be behind her this time. Not to be outdone, she tries to frame Jake's wife, Vanessa, for treason after she's caught sneaking around with Robert, a diplomat, claiming that she's been feeding him information, which he's been handing over to the Russians. You know, even though really they're just sleeping together as part of Jake's open marriage with her. And that's just the beginning.

Then, once she joins up with Cyrus... well, anyone who's watched this show a few times knows that when he and Olivia combine their powers, they have the potential to be lethal — and he tries convincing her to call for Mellie's resignation so that he can step up and be president. But then: Quinn.

Of course, up until Quinn makes her surprise entrance in Olivia's apartment, Olivia has no idea that Quinn is still alive. Only Charlie is privy to that information. And like anyone would, of course, Quinn wants to take down Olivia for (as far as she knew) getting her killed, but a fatherly instinct in Rowan makes him lash out against her. He tells Quinn that would be impossible, and if she tries to get revenge on Olivia, he'll kill her baby daughter. But after bargaining with Rowan to spare her baby's life in exchange for going off the grid and leaving Olivia alone, Quinn has other plans. Olivia comes home to hear the sound of a baby crying, and yes, you guessed it: baby Robin.

What was more shocking, though? The fact that Quinn surprises Olivia the way she does and doesn't shoot her, or that the bullet that came through the glass hits Olivia's shoulder and she instantly goes to Rowan for help? What wasn't shocking at all, however, was the fact that Rowan knows how to expertly remove a bullet from someone's arm in the middle of his kitchen. That is typical Papa Pope.

But what really shows the way Quinn has changed Olivia is the fact that even after all of that, when it comes time for her press conference, instead of asking for Mellie to step down, Olivia decides to step down herself. It's hard to trust her these days, so who even knows if she steps down to do the right thing, or if she has another scheme up her sleeve.

On the bright side, Scandal does give us the beautiful moment of Quinn reuniting with Abby and Huck... and Huck getting to hold baby Robin for the first time. The sweet scenes on this show are becoming fewer and farther between, but this was a really, really good one.

It's impossible to decide whether Olivia is good or evil, but there's a very good chance Shonda Rhimes is going to keep us on the edge of our seats on that question for awhile more. If Olivia is going to attempt to get her white hat back before we say goodbye to her for good, stepping down from chief of staff and not removing Mellie from office was a really good start.