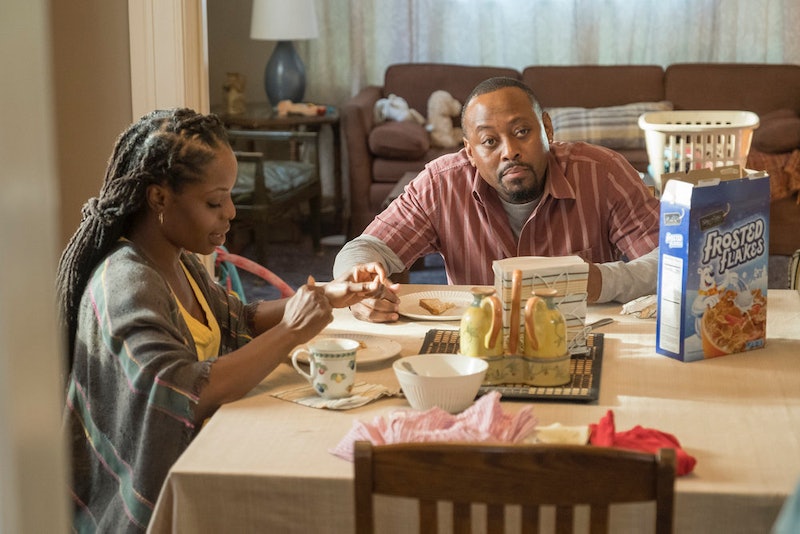 The This Is Us universe expanded significantly in the Season 4 premiere. The Pearsons were not the complete focus of the episode, which instead introduced several new characters and storylines. One of the newbies to This Is Us is Darnell Hodges, played by Omar Epps. On the show, Darnell is a mechanic in Philadelphia and the father of teenage Malik (Asante Blackk), who's raising a young child of his own.

Epps has been both a movie and TV actor throughout his career, which started back in 1988, according to IMDb. But he's likely most recognizable for his role as Quincy in Love & Basketball and playing Dr. Eric Foreman on House for all eight seasons of the show. He also recently starred in USA's Shooter TV series for all three seasons, among other projects.

On This Is Us, his character's son Malik met Randall and Beth Pearson's daughter Deja at a barbecue. That's how the Hodges family will connect to the bigger storyline — via their relationship with the Pearsons. Viewers got a hint of that when the car Darnell was working on had a Pearson city council campaign sticker on it, but it was confirmed by Malik and Deja's meeting at the end of the episode. It seemed there was a spark of interest between the two of them, which viewers know could be a complicated matter since Malik is a young single father.

A potential relationship between Deja and Malik could be further complicated by the fact that Malik was looking into some underhanded (but higher paying) work opportunities with an acquaintance of his father's. He was only steered away from it when the acquaintance refused on account of knowing Darnell and that it wouldn't be an approved-of path for young Malik. But Malik, desperate for money to give his baby the best life, could find his way into seedy employment somehow, which wouldn't be a life that either Malik's dad or Deja's parents would want for this would-be couple.

It seems that Malik's storyline with Deja will be the primary focus of any future episodes involving the Hodges family, but Darnell and his wife will get some screen time too, creator Dan Fogelman told Entertainment Weekly. "Obviously we didn't build up this character and that family to just have him be a guy Deja met once at a barbecue," Fogelman said. "[Malik's] going to play a big part in Randall's family's story — and Deja's story particularly."

Fogelman added that there's a Hodges family-focused storyline on its way as well. "We have an episode coming up where it combines the families [the Pearsons and Hodges], and it's interesting and it plays in socioeconomics and it goes into parenting and it goes into Randall's origin story." Fogelman told Variety that filming that episode was thrilling for him. "Omar [Epps] and Marsha Stephanie [Malik's mom] are so exceptional, and putting them with Sterling [K. Brown, who plays Randall] and Susan [Kelechi Watson, who plays Beth] is incredibly exciting," Fogelman said.

According to Variety, the Malik and Deja-focused episode comes in Episode 7. For now, the show is going back to mostly honing in on the core Pearson family. "It's not like we're doing an entire season of television without the Big Three in it," Fogelman said to Variety about introducing the new characters. "This is a starting point. The next three, four, five episodes are just wildly traditional episodes of the show."

After those episodes pass, there will be more time to explore these new characters. The dynamic between mechanic Darnell and the extremely privileged Philadelphia newcomer Randall (plus the dynamic between teen father Malik and Randall's adopted daughter Deja) sounds like it'll make for a must-watch episode when the show gets there in... about six weeks.