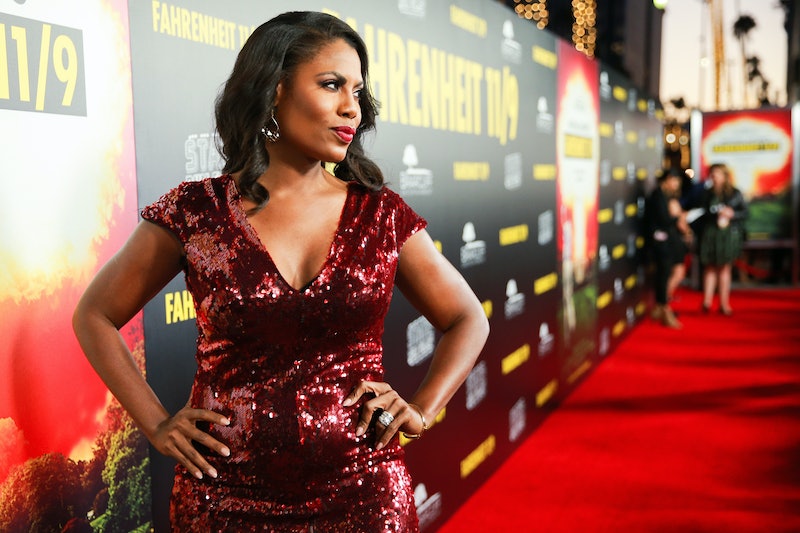 A since-departed White House employee has accused her former boss of discriminatory practices. According to court documents filed Monday, Omarosa Manigault-Newman accused Trump of pay discrimination, The Daily Beast Reports. The former reality star said she was paid less than a male counterpart who did similar work.

"While I strongly suspected I was subjected to pay discrimination while with the Trump campaign, I have since seen expert analysis confirming this to be true," Manigault-Newman said in a statement, per The Daily Beast. "The numbers don’t lie."

Bustle has reached out to the Trump campaign for comment.

Manigault-Newman has requested to join a pre-existing lawsuit against the president, The Washington Post reports. That lawsuit is spearheaded by Alva Johnson, who worked for the 2016 Trump campaign. Johnson has alleged that Trump paid her less than her white and male co-workers, and also accused the president of attempting to forcibly kiss her in August of 2016, per The Daily Beast. (Press Secretary Sarah Sanders, per Vox, called the sexual assault allegation "absurd on its face.")

Johnson filed a motion on Monday requesting that her case be expanded to a class-action lawsuit, which could allow Manigault-Newman to formally join her efforts, according to The Post. “This case is about two things: Donald Trump’s predation, and his campaign’s discrimination against women and people of color," Hassan Zavareei, one of Johnson's attorneys, said in a statement, The Post reports.

Manigault-Newman said that she wanted to join the legal fight in order help "level the playing field" for others.

"After nearly 20 years inside the beltway, working for two white houses and countless political campaigns, I’ve never witnessed such egregious violations as I did during my time under the leadership of Donald Trump and [Vice President] Mike Pence," Manigault-Newman said in a statement, according to BuzzFeed News. "I am joining this effort for women and minorities to help level the playing field in the political arena between men and women."

If the judge approves Johnson's request to open the suit to class-action status, The Post reports, the legal team will have the opportunity to recruit more women to sign on. If approved, they will be granted the opportunity to contact all women staffers working for Trump, per The Post.

BuzzFeed News reports that Manigault-Newman has worked near or with Trump since 2004, when she joined the first season of The Apprentice. She then worked for Trump on his 2016 presidential campaign, where she was named director of African American outreach, per Fortune.

After Trump was elected, she worked in the White House as the communications director for the White House Public Liaison Office. She left that position in December 2017, although there were conflicting reports about whether she had resigned or been fired. Manigault-Newman then wrote a book about her time working for the Trump administration.

It was not immediately clear on Monday afternoon whether or not Johnson's case would be granted class-action status. If it is, it would have the potential to grow significantly, given how those kind of lawsuits operate.