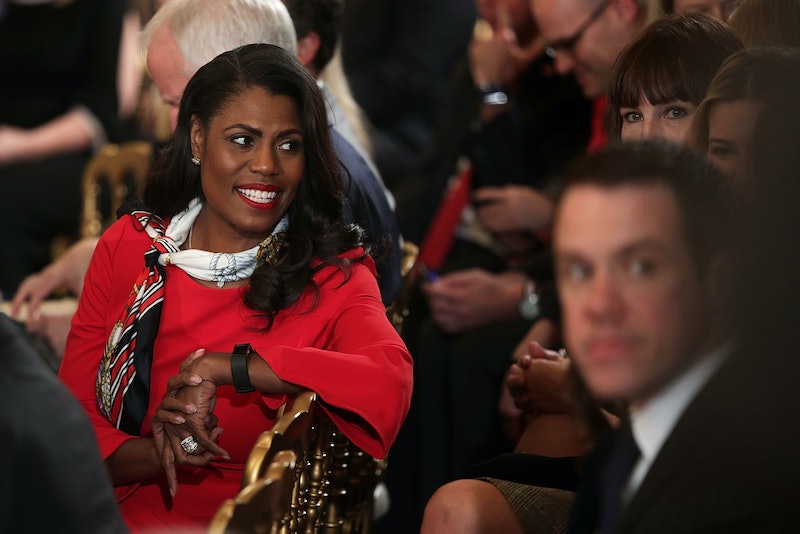 Apparently, President Donald Trump's former Apprentice contestant and White House senior aide Omarosa Manigault Newman sees Trump as something like a fire. In an interview with Trevor Noah on the Daily Show, Omarosa revealed how to shut Trump down — and her solution was also a good way to put out a flame.

"There's one way to shut Donald Trump down, and that is to just don't give him the oxygen," Manigault Newman explained to Daily Show host Noah on Tuesday night's show. She had already explained that she'd known Trump for 15 years, so Noah asked her for insights as a person who truly knew him well.

“And the oxygen comes from the clicks, the likes, the shock, the discussions," Manigault Newman continued. "Like when he attacked LeBron James, and everyone was just 'oh my god' — Donald Trump enjoyed every moment of that."

Manigault Newman was, of course, referring to the firestorm that erupted after the president insulted James' intelligence in a tweet.

“He enjoyed every single person that was shocked by his abrasiveness, his attack on this African American male athlete ― which is his favorite go-to thing. He loved it and he thrived off it,” Manigault Newman said — and looking back over Trump's presidency so far, her point really does seem to hold water.

Trump's tweets often include invectives that would have been very easy not to include, as they mostly serve to bring controversy and heated discussion. Think, for example, about the time he called Kim Jong Un "Little Rocket Man," referred to Congresswoman Maxine Waters as "an extraordinarily low IQ person," or even called Manigault Newman herself "a crazed, crying lowlife" and a "dog" in a recent tweet. Each of these occurrences led to plenty of media coverage, and therefore plenty of discussion — but no matter how much blowback the president gets for any given tweet or insult, he just keeps them coming.

“If you ignore him, then you starve him of the thing he loves the most ― and that is controversy and attention,” Manigault Newman told Noah.

Noah also asked Manigault Newman about one particular controversy surrounding the president that Manigault Newman's revelations have brought to the forefront: the claim that Trump is racist. Trump has repeatedly denied holding racist sentiments, but his former aide claims to have heard him using the n-word in a recording. Noah asked her about working with a man who, even much earlier on, had displayed what many see as racist sentiments — like, for example, believing and promoting the conspiracy theory that President Barack Obama was a Kenyan and a secret Muslim. In response, Manigault Newman said that she "had a blind spot when it came to Donald Trump" when she first met him — but that now she had the perspective that she needed to understand his true nature.

"Boy has he been a great disappointment," she said. "I looked like the biggest dummy following this person because I didn't have that same perspective."

Now, though, she seems to be fairly confident in her position. When Noah noted that she could be in what seems like a dangerous position — that of having severely angered the most powerful person in America — she said that she wasn't at all worried for her own personal safety.