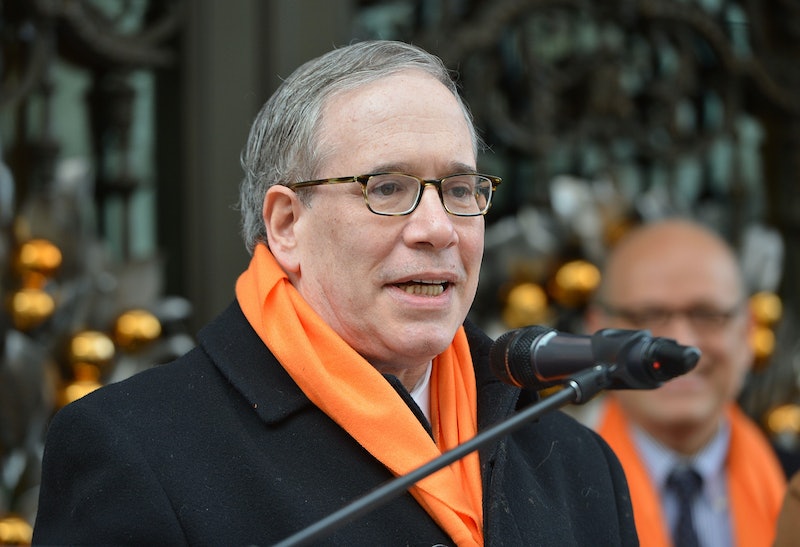 When it comes to the fight for equal pay for women, New York City is putting its money where its mouth is. New York City Comptroller Scott Stringer announced Tuesday that the city reached an agreement with several major healthcare and insurance companies, including AIG, Allstate, and UnitedHealth, to make their pay equity information public. The announcement comes just in time for Equal Pay Day, a day that raises awareness about the discrepancy between male and female pay. This year, Equal Pay Day is April 4, but the exact date changes annually, based on the point at which women finally catch up to what men made in the previous year.

The companies participating in Stringer's new initiative will disclose information about existing discrepancies in gender pay. Other companies will publicize additional information about their employee makeup and salaries, according to a press release shared with Bustle. Allstate, for example, will be releasing a diversity report detailing its compensation review process and pay equity adjustment policies later this year. Aflac will be releasing its female to male salary ratio in its next Corporate Social Responsibility report.

"Not only is it the right thing to do, it's great for business," Stringer tells Bustle. "When women succeed, our economy succeeds."

That principle appears to be in practice at Stringer's own office, as well. Of the 13 members of the comptroller's own leadership team, eight — or 61.5 percent — are female.

Pay inequity is not as simple as women making less than men for the same work (although that's a problem in many cases). There is also a significant gap between the number of women and men who are promoted to a company's highest leadership positions, even in female-dominated industries.

"Gender pay gaps can affect women throughout their entire career," Stringer says. "So, if you start on the wrong foot at a company that does not watch this or disclose this, you may never catch up in your lifetime, in your work lifetime."

"We're in the 21st Century, and companies should start acting like it. Now, more than ever, we need to publicly commit to ending the gender pay gap."

This recent initiative is just the latest example of the comptroller using the heft of New York's pension investments to promote corporate diversity. His office's Boardroom Accountability Project seeks to create something called "proxy access," which allows shareholders to submit their own recommendations for directorships. The Boardroom Accountability Project helps provide leverage when shareholders seek to persuade a company to engage in certain behaviors, whether it's mitigating potential environmental risks or employing a diverse set of directors and executives.

"We’ve targeted companies with all male, pale, and stale corporate boards," Stringer says. "And we’re demanding that women and people of color do not get stuck on a tenth floor on the way to the C-suite, which is exactly what’s happening."

That Stringer addition appears to be working: 17 of the companies targeted by the comptroller for a lack of gender diversity — including Ebay and Priceline — have hired a woman and/or minority director in the past two years, according to a January 2017 report from the comptroller's office. These corporate changes have been rooted in shining a light on workforce diversity (or lack thereof).

"Look, we're in the 21st Century, and companies should start acting like it," Stringer tells Bustle. "Now, more than ever, we need to publicly commit to ending the gender pay gap. And we think, in the comptroller's office, that transparency is key."

More like this
5 Crystals To Manifest More Money
By Megan McCarty
'Doctor Strange 2' Star Benedict Cumberbatch’s Net Worth Is Not An Illusion
By Hugh McIntyre
How To Fight For Reproductive Rights, Based On How Much Time You Have
By Courtney Young
LGBT+ Men Fleeing Afghanistan Were Denied Asylum By The Home Office, New Findings Show
By Sam Ramsden
Get Even More From Bustle — Sign Up For The Newsletter