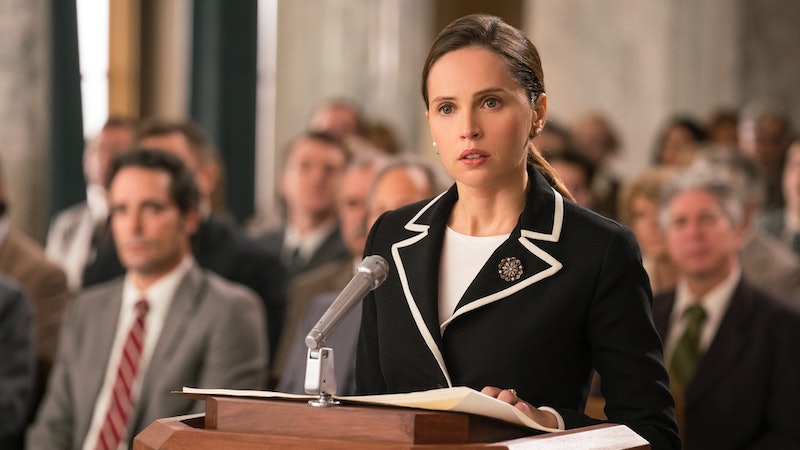 It's hard to imagine that anyone wouldn't want to make a movie about the notorious Ruth Bader Ginsberg, but the film On The Basis Of Sex almost didn't get made. In fact, the film had a hard time finding financing from studio executives for an incredibly sexist reason. As recently revealed by the film's screenwriter, producers wanted Armie Hammer's character in On the Basis of Sex to be less supportive because they didn't think it was realistic for Martin Ginsberg to have been such a loving husband.

In a recent interview with the New York Times, Daniel Stiepleman revealed that many financiers and development executives were reluctant to back the biopic of Supreme Court Justice Ruth Bader Ginsberg, because they didn't agree with the equal, balanced relationship between Ginsberg and her husband. "Backers offered to fund the film if [Martin] was rewritten as angrier, or less understanding; maybe he should threaten to divorce his wife, if she didn’t drop the case," he explained.

"It came up a lot," Stiepleman said. "I remember at some point saying in a meeting, 'There’s a 5,000-year history of narrative, of men coming home from battle, and their wives patch them up and boost their egos and send them back out to fight again. You write one supportive husband, and everyone’s like, such a creature could never exist!'"

On the Basis of Sex opens with the future Supreme Court Justice (played by Felicity Jones) as a first year law student, attending both her own classes and, after her husband Martin (Armie Hammer) is diagnosed with cancer, his classes. Ginsberg takes notes and transcribes lectures for her husband, while also caring for him and their infant daughter when she gets home every evening. After Martin recovers, he shows his wife the same degree of support in her career as she showed him, even arguing alongside her in court as she fights against gender discrimination in the landmark Charles E. Moritz v. Commissioner of Internal Revenue case. And yet, this true story of a husband supporting his wife was apparently too much for some potential financiers.

Luckily, the film found backing without having to change Martin's character. And for Hammer, the chance to play Martin was not only a chance to balance out Hollywood's outdated gender roles, but also to hopefully show audiences that men can be strong in a variety of different ways. "I’m sure that women feel like they’ve been stuck in these supportive roles for a long time," Hammer told the NY Times, "but for me, to get to play something like this was amazing, because it’s fair."

He continued, "I think that there is a lot to be gained from seeing that a man can be an even better and stronger man, while still being an incredibly supportive husband and a buttress for his wife. It didn’t make him any less of a man. If anything, it made him more."

Ginsberg herself has often spoken about the impact that her relationship Martin, who died in 2010, had on her career and her life. "Meeting Marty was by far the most fortunate thing that ever happened to me," Ginsberg said in the documentary RBG, which was released in September, as reported by People. "Marty was a man blessed with a wonderful sense of humor. I tend to be rather sober."

In another part of the film, Ginsberg explained that her late husband appreciated her intelligence, and that he championed her in everything she did. "He was the first boy I ever knew who cared that I had a brain. Most guys in the ’50s didn’t," Ginsberg said. "One of the sadnesses about the brilliant girls who attended Cornell is that they kind of suppressed how smart they were. But Marty was so confident of his own ability, so comfortable with himself, that he never regarded me as any kind of a threat."

In addition to celebrating the beautiful and inspiring love story between Ginsberg and her husband of 56 years, by showing Martin being supportive and encouraging of his wife, On The Basis of Sex also helps highlight the ways that stereotypical gender roles negatively affect everyone in society. Ginsberg's work at the ACLU illuminated the ways that gender inequality hurt both men and women by fighting cases like the Moritz case, in which a man was denied a tax deduction to care for his elderly mother on the grounds that only women were considered caretakers.

By having a male character play the "supportive spouse" role that would traditionally be played by a woman in most Hollywood biopics, On the Basis of Sex finds another way to subtly prove that gender biases hurt everyone in the long run. That those early financiers couldn't see that proves that RBG's quest for gender equality is still vitally important, in every field.