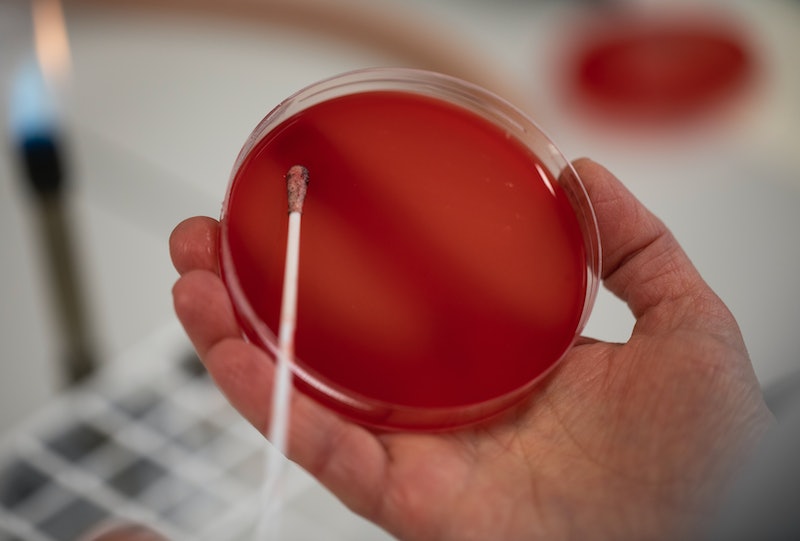 While there's no arguing that antibiotics have saved millions of lives since the 1940s, antibiotic overuse has left people vulnerable to infections that are resistant to traditional treatments. New research suggests that traveling overseas can put you at risk for being exposed to drug-resistant bacteria, Dr. Edward Ryan, head of the travel clinic at Massachusetts General Hospital, said on 60 Minutes. Dr. Ryan revealed that early results of a study about travel and antibiotic-resistant bacteria found that one-in-three people returning from overseas travel tested positive for a drug-resistant superbug, as Jezebel reported.

But don't let that stop you from getting on a plane. Dr. Ryan said that a drug-resistant superbug is just as likely to emerge in the U.S. as it is in a developing country. Like most living organisms, bacteria adapt and mutate to survive. In this instance, survival means mutating into an antibiotic-resistant superbug. If you've never been curious about life before antibiotics, the development of these miracle drugs meant that illnesses and infections that were previously fatal — like an infection from a cat scratch or a respiratory infection — could be cured. But it's also a case of too much of a good thing, and overuse of antibiotics could eventually return us to where we started — unable to treat bacterial infections.

"We took antibiotics for granted. We thought that we could use them like sugar pills, that they were safe and that resistance was just something that biologists worried about that you'd never actually see in real life," Ramanan Laxminarayan, an economist and a senior research scholar at Princeton University, told 60 Minutes.

Unfortunately, this is no post-apocalyptic movie plot. A research paper by C. Lee Ventola published in the journal Pharmacy & Therapeutics noted that in some countries, antibiotics are available over the counter, which makes them much easier to overuse. In the U.S., overprescribing of antibiotics is contributing to the problem. Further, if you stop taking antibiotics before the course is finished because you feel better, it can encourage the bacteria that *haven't* been killed off yet — aka, the strongest ones — to proliferate.

"Many public health organizations have described the rapid emergence of resistant bacteria as a 'crisis' or 'nightmare scenario' that could have 'catastrophic consequences.' The CDC declared in 2013 that the human race is now in the 'post-antibiotic era,' and in 2014, the World Health Organization warned that the antibiotic resistance crisis is becoming dire," Ventola declared.

While most people think it won't happen to them, David Ricci told 60 Minutes that he contracted a deadly drug-resistant bacteria in India after he was hospitalized for an accident. When he returned to the U.S., doctors tried 19 different antibiotics to treat the superbug, and eventually had to use one from the 1940s that came with a host of dangerous side effects, including organ damage. Ricci eventually recovered, but not everyone does. The CDC reported that 2 million people in the U.S. contract a superbug every year, and 23,000 people die from those infections.

A study from the British government predicted that by the year 2050 antibiotic-resistant bacteria will kill 10 million people a year, outpacing cancer as a leading cause of death. While this certainly sounds scary, there are some pretty simple things you can do to protect yourself and others from these superbug invaders.

"You as an individual can have a huge impact by first recognizing that taking antibiotics inappropriately is gonna do you far more harm than good. So even if you didn't care about resistance for other people, you might consider the fact that the antibiotics won't work for you when you really need them," Laxminarayan said. In addition, lay off the hand sanitizer and antibacterial products, which contribute to antibiotic-resistant bacteria, and wash your hands with old fashioned soap and water.

More like this
You Can Stay At The 'Hocus Pocus' House On Airbnb
By Alexis Morillo
Craving The Beach? Here's Your Guide To A Solo Vacation In Turks & Caicos
By Alexis Morillo
This Psychological Effect Might Be Keeping You From Hitting Your Goals
By Lexi Inks
5 Ways To Help People Impacted By Hurricane Ian In Cuba & Florida
By Emma Carey
Get Even More From Bustle — Sign Up For The Newsletter