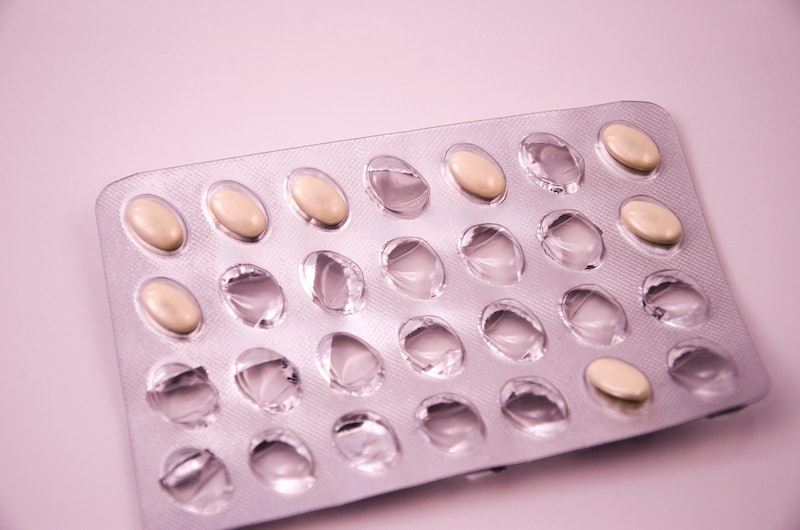 On Jan. 29, writer Shon Faye tweeted: "There is a nationwide shortage of oestrogen medications in the UK at the moment. I have to go around trick or treating at different pharmacies hoping to get part of my prescription filled. This affects so many women — trans and cis — and the lack of action on it is so gendered." It was an accurate description of the current state of oestrogen shortages in the UK.

It's a serious problem that's arisen in past year, affecting both cisgender and transgender women's lives. Pharmaceutical companies and the government have been accused of failing to adequately explain let alone manage the situation, and experts have been left wondering who is really to blame.

The power of oestrogen

Levels of oestrogen — one of the two main female sex hormones — decline when a woman enters menopause. This period "brings about a seismic hormone shift in women which can affect everything from sleep patterns, weight, skin, libido, and so on," explains Dr. Shirin Lakhani from London's Cranley Clinic.

Hormone replacement therapy (HRT) replaces the depleted oestrogen and works as "a powerful treatment to relieve the often overwhelming symptoms of menopause." Trans women can also be prescribed oestrogen treatment to decrease testosterone levels and assist with the physical aspects of their transition.

According to the Telegraph, around 200,000 women in the UK are prescribed HRT. There's less information on the number of trans women taking the hormone. But Dr. Jane Hamlin, president of transgender support organisation, the Beaumont Society, says "some members have experienced difficulties ensuring consistent supplies."

The effects of not having access to medication that you rely on cannot be overstated. Maria, 31, from Newport is taking oestrogen for her transition. She says her pharmacy had to switch suppliers twice due to shortages. Both times, she went three to five days without the treatment, during which she experienced mood swings and hot and cold flushes.

"I don't feel enough information is available about the shortage," Maria says. "This is very upsetting to me because this is something that majorly affects my life."

"The psychological impact of not being able to access hormone replacement has been devastating" for some, agrees menopause counsellor and founder of the #MakeMenopauseMatter campaign Diane Danzebrink.

"Some women have resorted to buying their HRT products via private pharmacies with some spending several hundred pounds since the shortages began. Others have travelled abroad or asked friends or family travelling or living abroad to buy HRT products over the counter for them." Alternatives have not always been successful, Danzebrink adds, "leading to a return of physical, psychological, and cognitive symptoms."

GP and menopause specialist Dr. Louise Newson admits the oestrogen shortage has been "really difficult." She says the choices available have been "very limited", causing some people to stop their hormone treatment. Not only has this resulted in "significant symptoms," it has also put women "at increased risk of diseases such as heart disease and osteoporosis."

For trans women who aren't taking an anti-androgen and haven't had gender confirmation surgery, not having access to oestrogen can result in "a return of masculine features," Dr. Leighton Seal, consultant endocrinologist at London's Gender Identity Clinic, told iNews. This can lead to increased gender dysphoria and feelings of depression and anxiety.

Trans women who have had surgery or are taking an anti-androgen "would go into the menopausal state," Dr. Seal explained to iNews. "But more importantly, her transition would stall."

The ups and downs of the shortage

The shortages are believed to have started in late 2018, per the Guardian, after supply issues in China halted the manufacturing process. This trickled down to other brands, who seem to have struggled to keep up with the new demand for their products.

In Aug. 2019, the Guardian reported that half of the most commonly prescribed HRT treatments were out of stock. September saw a warning from experts about the "profound and widespread mental health issues" experienced as a direct result of the shortages, per the Independent. And October saw the government restrict exports of 19 HRT medications to ensure patients had access to alternatives.

Pharmaceutical companies have forecasted new stock at various dates throughout 2020, and even as far away as 2021. At the end of January, the British Menopause Society (BMS) released its most up-to-date information on stock availability, confirming that some products will be out of stock for several more months at the very least.

The likes of Oestrogel; Estradot, Estraderm, and Elleste MX patches; and Sandrena estradiol sachets are currently available. Pfizer says all of its HRT medicines are currently in stock. Theramex, which bought the Evorel product range in Oct. 2019 from Janssen, has invested in an additional manufacturer and increased output to ensure the situation doesn't repeat itself. Evorel Mono 50 and Evorel Conti will therefore be in stock from Feb. 14; other Evorel products are expected to be available in March.

"We understand the HRT supply situation should begin to improve from Feb. 2020 as the range of products which supply 70% of the HRT patch market will be re-introduced to the UK market," Dr. Edward Morris, president of the Royal College of Obstetricians and Gynaecologists (RCOG), said in a statement. "However, a number of HRT medications and contraceptives remain unavailable, some until the end of this year, and some with no timeline as to when they will be back on the market."

Frustration is felt across the board. Eoghan O’Brien, a pharmacist in Northern Ireland, told Chemist+Druggist the shortages were adding a "lot of extra time" to daily work. Finding an alternative isn't easy for pharmacists either, since many have faced stock problems too.

"There are not always exact matches available," explains pharmacist Shamir Patel, founder of Chemist 4 U, meaning that we have to place them on the closest option, such as a combination of oestrogen and progestogen, whilst being mindful of their doses."

Other pharmacists described the situation to Chemist+Druggist as "really bizarre". Patel, however, says he is hopeful it will be resolved. "We are being kept up-to-date by manufacturers and are being told that stock levels should be replenished over the coming months."

Mike Dent, director of pharmacy funding at the Pharmaceutical Services Negotiating Committee (PSNC), which represents NHS community pharmacies, told Bustle the PSNC "remains very concerned about the impact that all medicines shortages are having both on patients and on community pharmacies who are working increasingly hard to source the medicines their patients need.

"We are involved in negotiating price concessions where shortages lead to unfair price increases for pharmacies, but we have no powers or authority to request access to the information that the Department of Health and Social Care (DHSC) uses to investigate the causes of medicines shortages."

So what is causing this particular long-lasting shortage? Pfizer notes that "global pharmaceutical shortages can be caused by a wide number of challenges including changes in demand, quality matters, materials availability, and complex regulatory requirements. We work very hard to avoid medicines shortages but, despite our best efforts, unexpected delays can occur."

Most of the blame for the current situation, though, is being pinned on manufacturing problems. But could there be more to this issue than meets the eye?

Janssen says availability of its products "has been impacted across Europe following an unprecedented increase in demand last year in a number of countries including the UK, resulting in an accelerated depletion of available stock. This was due in part to the lack of availability of alternative HRT products not produced by Janssen."

Experts, however, have noticed the UK has been hit harder than any other country in Europe, per Tortoise, leading to suggestions that another contributing factor may be in the mix. A few months before the first HRT product mysteriously disappeared, the UK government updated its drugs pricing policy. That's according to a Tortoise investigation, published in Nov. 2019. The lengthy document shows 15 HRT products were added to Category C of the NHS drug tariff; a clue to why the UK oestrogen market has been so badly affected, the publication hypothesised.

"The drug tariff sets out the prices the NHS will pay for medicines to pharmacies," Hemant Patel, secretary of the North East London Pharmaceutical Panel, explained to Tortoise. "It used to be that the price paid to the pharmacy would be slightly more than the price paid to the wholesaler, but now there are a lot of drugs in Category C of the NHS tariff on which pharmacists are losing money because the DHSC takes a long time to reflect market prices."

Essentially, Tortoise's theory is the DHSC tried to reduce the cost of these medications to the NHS, but made selling them to the UK an unappealing prospect for pharmaceutical companies.

David G Taylor, professor of pharmaceutical and public health policy at UCL, explained the effects to Tortoise. “If you control the price of a drug so it is lower than in other markets, the other markets will get preference," he said. "The NHS has a cost-limiting culture that is always just on the edge of pushing things too low ... There is an element of NHS management that cares more about budget control than about patient care.”

The DHSC told Tortoise this price change was "in no way linked to the global shortage, which is due to manufacturing issues outside of the UK government's control." When asked for further comment by Bustle, the DHSC did not respond.

A spokesperson for Theramex said while the company cannot comment on broader supply issues, the shortage has "affected all countries" and there is "absolutely no link" between NHS drug tariffs and the UK shortage from their perspective. "If that was the case, we wouldn't have acquired this product," they stated. Bustle has contacted other manufacturers for clarification.

Whatever the reason for the shortage, it's important not to forget the people whose lives have been altered because of it. And it's important to hold the government to account for healthcare failures.

Thankfully, people are waking up. "Thousands of women and girls have been adversely affected by this ongoing situation and they deserve better," president of the RCOG, Dr. Edward Morris, said in a recent statement on HRT and contraceptive shortages, which have also been ongoing for months.

Together with WHO, the RCOG is "calling on the DHSC to set up a working group with industry, regulatory agencies, and our organisations to get to the root of why shortages in both HRT and contraceptives have occurred. This working group must work together to ensure that this situation is prevented from happening again.”

For those who face daily uncertainty, it's a welcome call. But one can only help but wonder if a product intended for use by cis-men would ever end up in the same predicament.

If you have been affected by the oestrogen shortages, your GP will be able to advise on alternative treatments. Equivalent options can be found via the BMS.