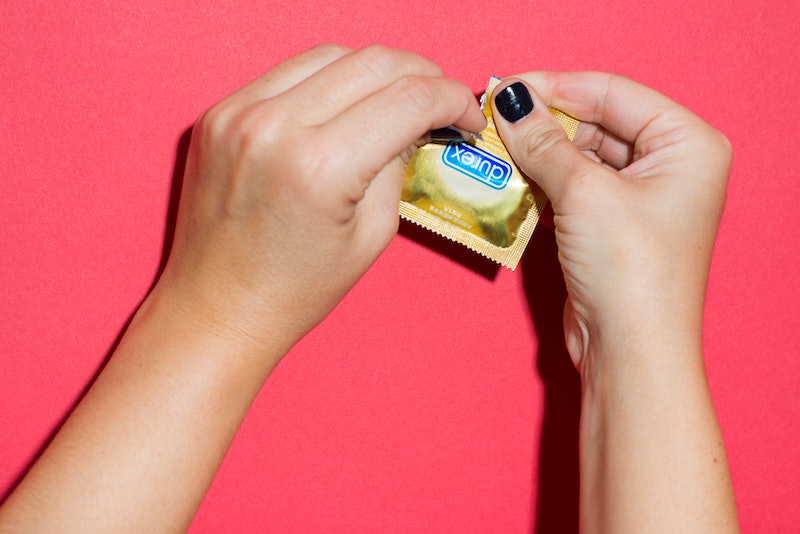 One of the best things about the #MeToo and #TimesUp movements is that they've opened up such an important conversation, not just about assault and people in power, but also about the importance of consent — clear, enthusiastic, unequivocal consent. It's crucial for a healthy sexual encounter and for a healthy sex life. But a new study from the Center for American Progress, a nonpartisan policy institute, has uncovered the woeful state of sex education in the U.S., especially when it comes to consent.

The findings looked at the state of sex ed and sex ed requirements around the country and found that, right now, only eight states (and the District of Columbia) require mention of consent or of sexual assault in their sex ed curriculum. California, Hawaii, New Jersey, North Carolina, Oregon, Rhode Island, Vermont, and West Virginia are the only states that require sex education to include consent on the curriculum. This is pretty terrifying, considering how crucial consent is when a person is still in their formative years, developing their attitude toward sex, and learning what a healthy sexual encounter should look like. But it wasn't all bad news, some states were found to be tackling the issue responsibly.

"What surprised us the most is that there are states like California, Oregon, and D.C. that are tackling these tough issues in a sophisticated and honest way, helping students to learn to communicate about their feelings and desires and form healthy relationships," Catherine Brown, vice president of Education Policy at the Center for American Progress, tells Bustle. "Even some conservative states like Kentucky, Idaho, Utah, and Oklahoma and have seen recent pushes to expand and improve their sex education standards, proving that progress is possible everywhere."

It's so important that people have a clear understanding of what consent is — especially as research from Binghamton University found that most men confuse interest and consent.

"Learning about consent at a young age is essential not only to help prevent sexual assault and rape, but also to ensure that the sexual encounters young people have in the future are wanted and safe," Nicole Cushman, executive director at sex ed site, Answer, tells Bustle. "Early conversations about consent can help teens decide what they want and don't want in romantic relationships, learn the skills to communicate their boundaries, and help them to respect the boundaries of others."

But the problem with sex education in this country went beyond just the consent issue. Only 24 states (and the District of Columbia) mandated sex ed at all. That means there are 26 states where it's not required. And in the states that did require sex ed, the guidelines weren't always very clear. The study found that states like Georgia, South Carolina, Kentucky, and Nevada were very vague about what the curriculum should actually look like — and study authors also noted that Tennessee and Montana stress abstinence-only and STI education, despite the fact that this method has been shown not be effective when it comes to reducing teen pregnancy — or teen sexual activity, for that matter.

Sex ed is too important to be left down to some ZIP code lottery, where the quality of your education — and maybe whether it exists at all — is just a random side effect of where you live. The issue needs to be dealt with on a federal level, to make sure that every student is given comprehensive sex ed — including understanding the importance of consent, what it means, and how to get it. If the #MeToo movement has taught us anything, it's that understanding consent can't come quickly enough.