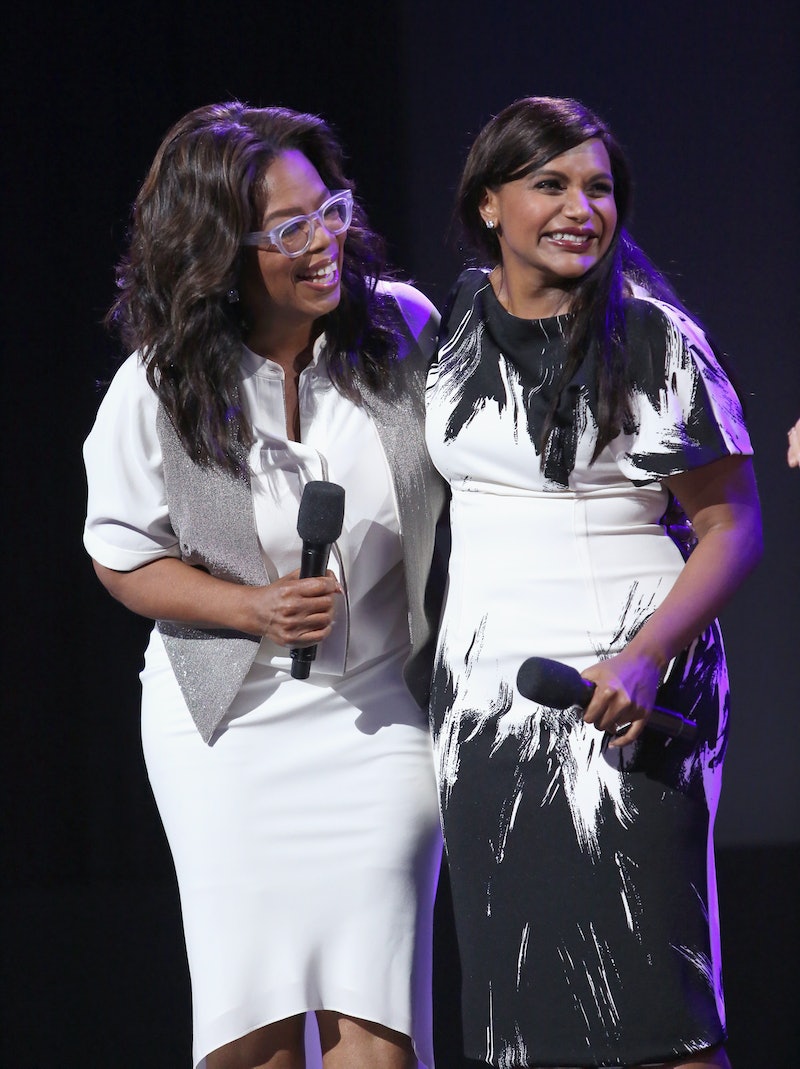 For those who have been dying to know if the news is true, it looks like Oprah has your back. Oprah confirmed Mindy Kaling is pregnant in an interview with People. The former talk show host said her A Wrinkle In Time co-star revealed the exciting news to her at Disney's D23 expo in July.

EARLIER: "That’s when she told me," Oprah said. "My mouth dropped. 'What did you just say?' she said, 'Oh, Oprah, I don’t think you know. I’m 5 months pregnant.' And I said, 'WHAAAAT?!'" Well, there you have it. If Oprah says she's pregnant, then she's pregnant.

Who knows how Kaling feels about the one and only Oprah making this huge announcement when she hasn't even commented on the reports herself, but her The Mindy Project character, Mindy Lahiri, would totally love it. As fans of the Hulu comedy know, Lahiri knows the ins and outs of pop culture, so to have someone as huge as Oprah tell the world that she is expecting? Yeah, she so wouldn't be mad at that. Lahiri would revel in it.

On July 17, news broke of Kaling's pregnancy, but nothing had been confirmed at that time. E! News reported that the comedian was pregnant with her first child and that the pregnancy was "an unexpected surprise." Bustle reached out to Kaling's rep for comment at the time and regarding Oprah's statement, but did not receive a response.

It'll be interesting to see if the former star of The Office comments on her pregnancy or Oprah's statements, but, either way, it's important to remember that it's totally up to Kaling when and if she wants to discuss it herself.

More like this
Julia Haart’s Husband Fired Her As CEO Of Elite World Group
By Brad Witter
Kate Middleton & Prince William Were Booed & Mocked On Their U.S. Visit
By Jake Viswanath
North West Has Mastered The Wednesday Addams & Lady Gaga TikTok Dance
By Jake Viswanath
The Fan Whom Adele Scolded For Using A Filter On Their Selfie Has Something To Say
By Radhika Menon
Get Even More From Bustle — Sign Up For The Newsletter