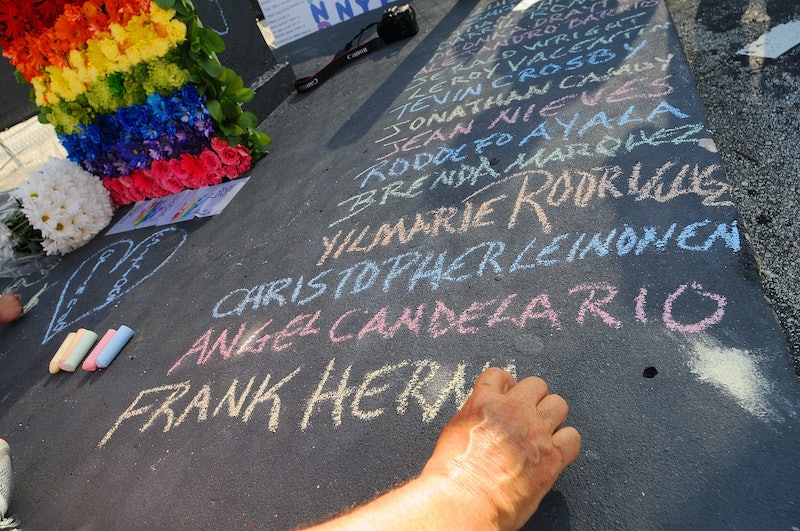 On Monday, lawmakers in Florida introduced legislation that would turn Orlando's Pulse nightclub into a national memorial, The HuffPost reported. The gay nightclub in Orlando, Florida became the target of a horrific and deadly shooting on June 12, 2016, and now, lawmakers are asking for federal funding to help honor the victims.

The introduction of the bill came just days before the third anniversary of the Pulse shooting. In June 2016, authorities reported that a shooter opened fire at the nightclub, killing 49 people and injuring more than 50. If the bill passes, the memorial would serve as a reminder of those who lost their lives in the incident, Florida Democratic Rep. Darren Soto said, according to ABC News. The potential landmark at the now-closed Pulse nightclub would also ensure, Soto stated, that "no one ever forgets this tragedy."

"The memorial will serve as a reminder of the remarkable way our community came together to heal and overcome hate," Soto said at the interim memorial for the Pulse shooting, per The HuffPost. "We recognize the need to preserve LGBTQ historic sites because of cases like the Matthew Shepard Memorial, which have been deliberately destroyed over time without these protections. Let the Pulse Memorial become a symbol of hope, love and light."

In his comments, Soto was also referring to the late gay University of Wyoming student, Matthew Shepard, who was brutally beaten in 1998. After being violently attacked by two men, the young student died on Oct. 12, 1998. The student's parents, Judy and Dennis Shepard, launched The Matthew Shepard Foundation with the hopes, they stated per NBC News, to "erase hate by replacing it with understanding, compassion, and acceptance."

If the legislation passes, the memorial would be part of the National Park System, according to The HuffPost. The former owner of Pulse, Barbara Poma, would have control of the construction and design of the memorial, Soto said, per the outlet.

One of the other representatives to introduce the bill, Stephanie Murphy, said the Pulse shooting shook the Orlando community "to its core," according to ABC News. "It’s important we remember the love that the 49 victims and their loved ones brought into this world, which will always be stronger than the hate that stole their lives on that day," she said.

"By designating the site as a National Memorial," Murphy added, "we will honor their memories, be inspired by their legacies, and recognize the positive contributions the LGBTQ community offers to the world."

Yet another representative behind the legislation, Democratic Rep. Val Demings, took to Twitter to shed light on how the Orlando community endured the horrific shooting.

"A community is not brick and mortar, it is the lives of its people, the dreams of its children, and the memory of those we’ve lost," Demings tweeted. "Our strength flows from those memories, which cement the bonds of our common humanity and unite us in shared history." The lawmakers behind the bill wish to see it pass by June 2020.