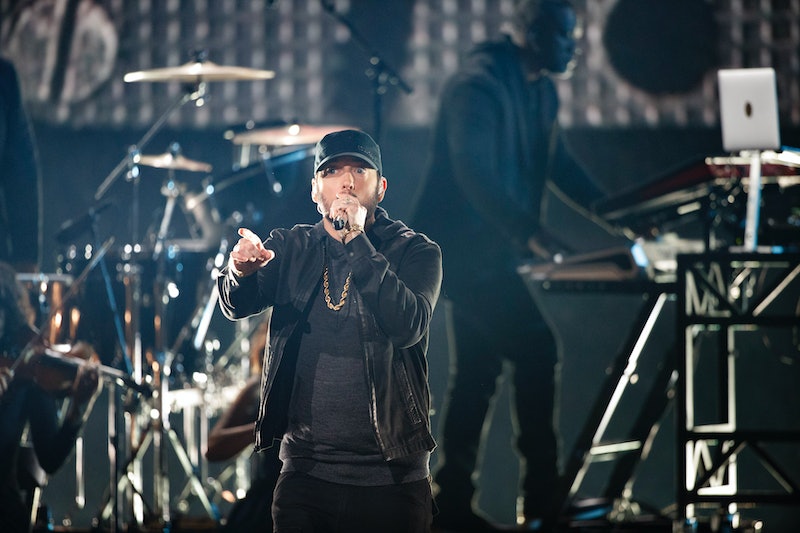 One of the most puzzling moments of the 2020 Academy Awards has a story behind it — kind of. On Monday, Feb. 10, an Oscar producer explained Eminem's surprise performance, a mid-show appearance which came nearly 18 years after the rapper won Best Original Song, as per People. During the show, Lin-Manuel Miranda introduced a segment looking back on some of the most iconic Best Original Song winners, ending on "Lose Yourself" from 8 Mile. Eminem then came out and performed the track for no discernible reason, surprising both the audience and viewers at home.

On Instagram, Eminem also explained his decades-late performance, posting a video from the 2003 Oscar Awards and writing, "Look, if you had another shot, another opportunity... Thanks for having me @theacademy. Sorry it took me 18 years to get here." The rapper famously skipped the ceremony the year his song was nominated to watch cartoons at home with daughter Hailie in Michigan, according to People. During the ceremony, presenter Barbra Streisand presented the award to co-writer Luis Resto.

It appears Eminem's performance was scheduled to emphasize the "impact" of music, surprise viewers, and give the rapper a second chance with the Academy. But nearly 20 years after "Lose Yourself" was recorded and nominated, and in a year with more recent musical tracks that could have been performed, it was one of the most confusing choices the award show made.

On Twitter, fans shared confused reactions to Eminem's performance. And everyone had the same question: Why?

During the performance, even the celebrities in the audience looked pretty baffled by the rapper's appearance. Martin Scorsese appeared to be asleep, Brie Larson seemed confused but into it, and Billie Eilish seemed to give the performance an epic side-eye. Yet, at the end of the track the rapper was given a standing ovation by the audience in the Dolby Theatre, so perhaps they were actually less confused than viewers at home. Or maybe they just "lost themselves" in the performance.