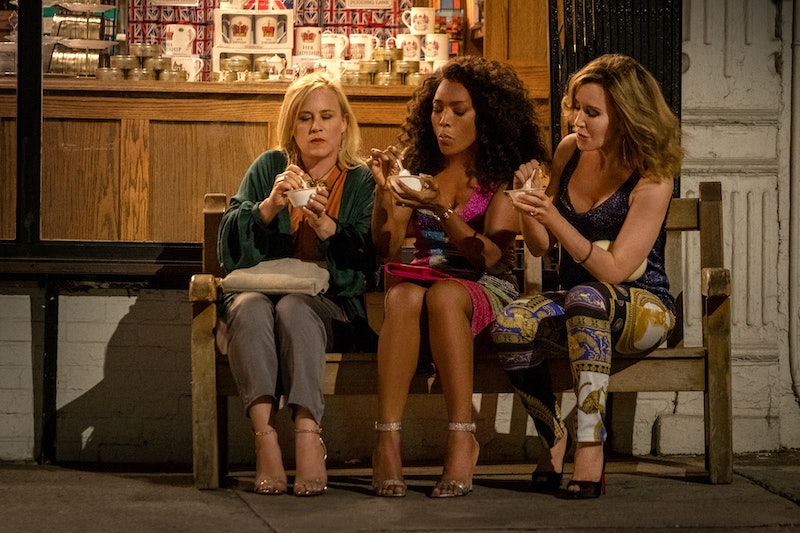 Motherhood can be all-encompassing of a woman's life. Exhaustion, frustration, and anxiety accompany such intense love and joy that it's no wonder that, for at least a few decades of their lives, women with kids feel like their identity is attached to their children. So what happens when the kids grow up, move out, and you have to re-find yourself? That's what the Netflix movie Otherhood is asking. The comedy, which hits the streaming site on Aug. 2, stars Angela Bassett, Patricia Arquette, and Felicity Huffman as three friends whose sons neglect them on Mother's Day. But instead of sulking at home, they head to NYC to re-connect with their kids and themselves. The movie seems to hit the mark on the totally engulfing journey of motherhood, but is Otherhood a true story?

Otherhood doesn't appear to be based on any specific, real moms, but that doesn't mean it isn't super true to life. Most moms will surely tell you that raising another person can be pretty consuming. As Carol (Bassett), Gillian (Arquette) and Helen (Huffman) express in the trailer, motherhood had been their identity for so long that when their adult children don't need them anymore, they have to redefine themselves as women. "At this stage, it doesn’t feel like motherhood, it feels like otherhood," Gillian says to her friends.

Bassett, who has twins, a boy and a girl, told NPR that she definitely identifies with the plight of the trio of Otherhood. "Having an adult child is essentially being broken up with little by little by little — they're just not into you anymore," she says. "Carol is trying to emerge from the all-encompassing stage of motherhood and remember who she is as an individual." Carol's husband has passed away, and without the obligation of caring for anyone, she's lost. "You know who you are without me," Carol says to her son in the trailer, "I need to figure out who I am without you."

This isn't the first time that Arquette has played a role in which the journey of motherhood has been a defining feature. Playing the mom in Richard Linklater's Boyhood, she shot scenes once a year over the course of 12 years, watching her on-screen son Mason (Ellar Coltraine) grow up, while also raising her own daughter, who was born in 2003. "I think I am kind of an over-worrying mom a little bit," Arquette told Manny at the Movies. "And that's what I like about my character's journey. She learns that she's made some big mistakes in her overreach."

The film's third star, Huffman, appears to have been sitting out the Otherhood press circuit. Huffman recently pleaded guilty to fraud charges in the college admissions scandal, admitting to paying $15,000 for a proctor to help her daughter cheat on the SATs. "I am in full acceptance of my guilt, and with deep regret and shame over what I have done, I accept full responsibility for my actions and will accept the consequences that stem from those actions," she said in a statement.

In her absence, Bassett has expressed her support. "We all make mistakes. None of us is perfect," Bassett told The New York Times. "I think Felicity handled these unfortunate circumstances in a mature, responsible way. She held herself accountable and didn’t make excuses for her decisions, and I can only respect that."

Their movie Otherhood may not be based on any particular mom's personal story, but finding yourself after a huge life change, like your kids growing up, is something many women experience, providing the film with a true-to-life connection a lot of viewers will relate to.

More like this
Lindsay Lohan & Jonathan Bennett Celebrated Mean Girls Day Very Differently
By Jake Viswanath
12 ’90s Movie References You Missed In 'Do Revenge'
By Radhika Menon
What’s New On Netflix: Ana De Armas’ 'Blonde' & A Nick Kroll Special
By Arya Roshanian
These 25 International Horror Movies On Netflix Prove Fear Is A Universal Language
By Bustle Editors
Get Even More From Bustle — Sign Up For The Newsletter