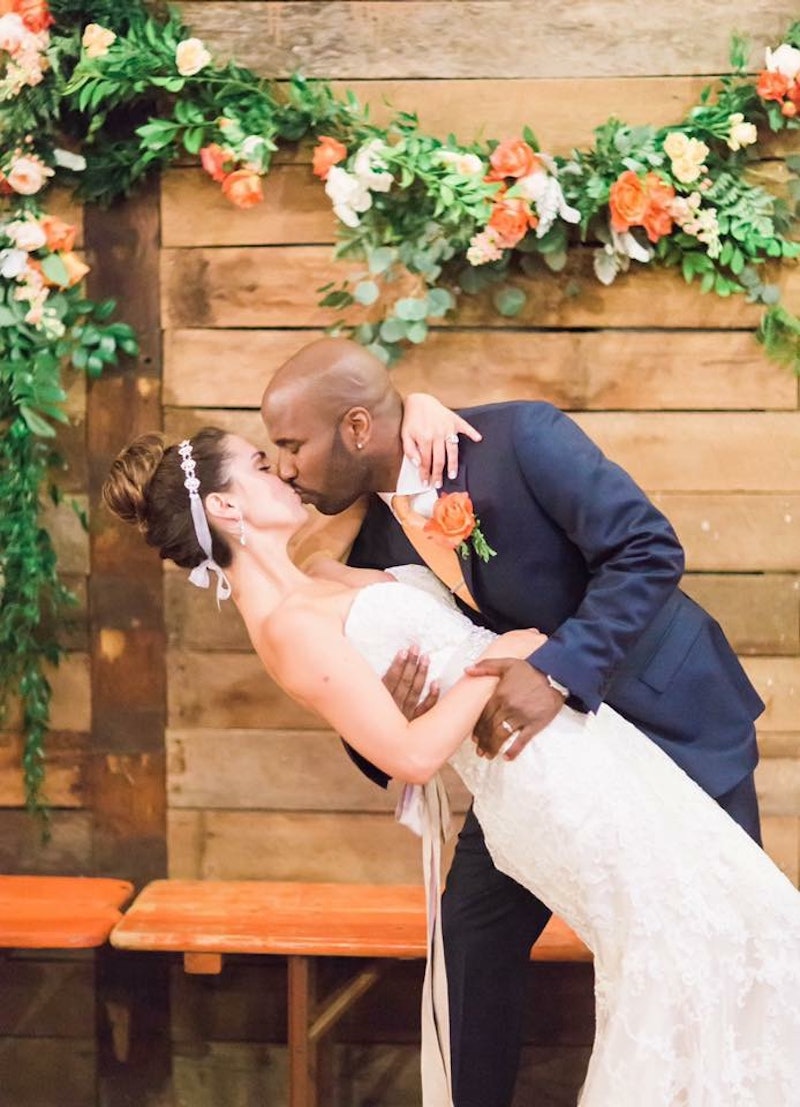 Women’s life choices have always been saddled with traditions and conventions that don’t necessarily serve us: finite timelines, finite storylines for when, who, and how you love, how you look, what you do, where you go — and our "dream weddings" are just the icing on the cake. That's why Bustle's I Do It Differently (Under $15K) series is focused on brides who are breaking the mold, but not breaking the bank.

My husband is a hip-hop artist, originally from New York City. We met at a bar there, when I was in town for a job interview. I wasn’t single at the time, so I didn’t pay much attention to him, and we didn’t really stay in touch. But a few months later, I saw he was having a concert in Virginia, so I decided to go with some friends. We went out for drinks after and texted almost every day for the following weeks. We dated long-distance for two years before he moved to Virginia. We dated for six years before he proposed.

I threw my boyfriend a surprise birthday party in November at our house. At the end of the birthday party, he proposed to me in front of all our family and friends. He had planned to do it the following week at Thanksgiving but since everyone was there, he figured it would be special to surprise me back.

We had already been together for six years and didn't want a long engagement, so we came up with the perfect idea: We should surprise all of our family and friends by having an engagement party turned wedding!

We had my mom send invites out to everyone, saying that she was surprising us with an engagement party in April once my fiancé got off tour, and to keep it a secret. We even made a fake website with save the dates for a "wedding" in November.

The planning was actually incredibly hard to execute because A) my fiancé was on a nationwide tour so he couldn't help much; B) we had to pick a venue that seemed more appropriate for a party than a wedding in order to not give anything away; C) we only had five months to plan an entire wedding; and D) we had to lie to all the vendors and say it was an engagement party... Plus, we had to play dumb with all of our friends and pretend like we knew nothing about this engagement party (the only people who were in on it were our parents and siblings).

My fiancé and I weren't necessarily on the same page on the wedding budget initially, but once we started shopping for venues, that changed. One place quoted us $15,000. We knew we could make the wedding special in so many other ways besides spending a lot of money on it. We just wanted to eat, drink, and be married!

We knew the longer we had between the engagement and the wedding, the more we would have to plan and spend money.

I did have to travel out of town to find it. I was pretty transparent with all of the stores I contacted about my timeframe, and told them to only show me dresses that could be ordered and received within it. Before I really started looking, I had my heart set on a backless dress, but once I tried mine on, I knew it was the one.

We bought Champagne from Costco and only had beer and wine — with the exception of our signature cocktail. And, instead of a traditional dinner, we hired a food truck.

I have a friend who is a photographer, Hay Alexandra Photography, who gave us a discount as a gift.

The wedding venue was really rustic, with old, brown shiplap walls, so we didn’t need to do much. We had those big gold letter balloons that spell out "love" as a backdrop [for] our dessert bar, as well as lots of colorful candy in jars as both decor and treats. We had our hashtag as a banner for the backdrop of the photo booth.

We gave a list of “must play” songs to the DJ and from there, he came up with some mixes. He also took requests from the guests. We told him we wanted it to feel like a party, not typical wedding music like "Shout."

The arrangements were really our only pops of color. I went to the University of Tennessee, so I had to have deep orange. I also wanted lots of greenery, so the florist mixed it and made it really romantic. We used the bouquets from the bridesmaid and myself as extra decor.

One of our friends ended up baking us a cake for an engagement gift.

We ended up spending $3,000 on his wedding band and using an old family heirloom for mine.

What Was Exactly The Same

Despite making the majority of our wedding fall under the budget, photography is just something you can't really skimp on. Sure, you can hire a less expensive photographer, but the quality of pictures was super important to us, especially since we wanted the surprise aspect captured.

What Was Entirely Different

We called it an engagement party instead of a wedding. The only vendors who knew it was a wedding [were] the venue, DJ, and photographer. Everyone else thought it was an engagement party. I think just mentioning the word wedding tends to make prices hike.

We skipped wedding favors, giant arrangements, a huge bridal party, and the traditional venue. We did siblings-only for our wedding party and had a family member marry us.

Most people are coming there to celebrate you, they aren't going to remember to take home that jar of honey that says "love is sweet" at the end of the night.

We offered a signature drink instead of an open liquor bar. We thought it was more intimate to serve our favorite drink, and it kept the guests a little more under control.

The focus remained on the point of the wedding/celebration, which was to get married in front of friends and family. We didn't get caught up in making things lavish but the idea of just celebrating our love and spending time with our friends and family. Because it was a surprise, most people dressed casually, and some of them were embarrassed that they weren't dressed up, but I reminded them (sweetly) that the day was about me and my husband and to just focus on that.

People tend to make weddings all about the guests, when it should be about the two of you getting married. It's hard enough you have to socialize with everyone who came to support you; you tend to lose a lot of the night to that. You want to keep as much focus as you can on celebrating with your new spouse.

Constantly having to check ourselves, spending-wise. We could have had more lighting on the dance floor, etc., and little details like that, but it was unnecessary.

How Our Guests Reacted

We got lots of compliments on the idea, and a lot of friends told us they wished they had not spent so much on their own weddings, or that they had been more low-key. I had estranged friends contact me on Facebook afterwards, telling me what a great idea it was. I've also had friends take certain elements from my wedding for their own, like my colors, or my vendors, or doing a food truck, but no one else has done a surprise wedding yet. Even friends of friends get in touch to ask how I pulled it off. We get compliments all the time on our wedding and how unconventional it was.

We knew that having a surprise wedding would cut out a lot of the expectations and input from people. We knew the longer we had between the engagement and the wedding, the more we would have to plan and spend money [on]. We just wanted the focus to remain on us and not on everyone else.

I wouldn’t say staying on a budget was stressful or frustrating; it was just another element we had to deal with that a lot of other couples don’t pay attention to. I felt like we had to prioritize what was most important to us.

I really don't have any regrets, actually, except now I can see even more corners we could have cut!

Use your resources! So much of what people pay for in weddings [goes] to waste. Instead of having our bridesmaids set their bouquets down and forget them, we had them put them in vases by the bar for decoration. We used the same benches for the ceremony for the dinner and just moved them.

I think a lot of people overthink the small details as well. Most people are coming there to celebrate you, they aren't going to remember to take home that jar of honey that says "love is sweet" at the end of the night.