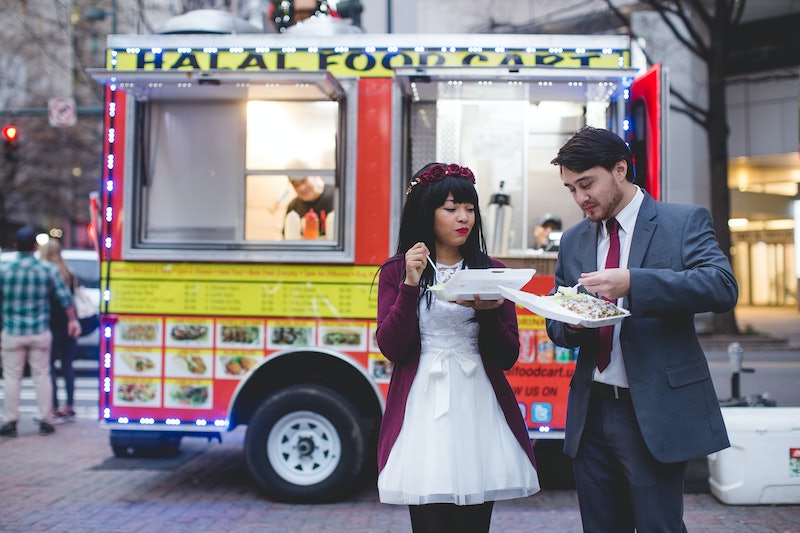 Women’s life choices have always been saddled with traditions and conventions that don’t necessarily serve us: finite timelines, finite storylines for when, who, and how you love, how you look, what you do, where you go — and our "dream weddings" are just the icing on the cake. That's why Bustle's I Do It Differently (under $15K) series is focused on brides who are breaking the mold, but not breaking the bank.

"Doing It Our Way"

We met in an ice cream store about two years ago. I just walked in with my friend, I mentioned to her that [Carsie] was cute, and then she told him. And she was like, "Well if you think he's so cute then you should give him your number," something stupid like that. But we didn't really become friends until last year.

We would go out to karaoke nights and dumb stuff like that, but we didn't really start dating until last year. We started dating in August and we got married in December.

We were talking about it. It was more like, "I want to spend the rest of my life with you, we probably shouldn't wait, let's just do it."

After we got engaged, we kind of went back and forth between deciding to elope and having a big, huge wedding. This is actually my second marriage, so I've done the big, huge wedding before, and it wasn't worth the stress.

I don't like being the center of attention. I don't like dancing. My family doesn't know his family, and my friends, they don't really know his friends. Just trying to plan it, like, who's gonna sit next to who? What kind of food should we have? All these people have these different food aversions and things like that. It was just a lot to coordinate, with all these other people's likes and dislikes, when it should really be about just us and how we feel about each other. That was when we decided to elope instead of just plan the wedding at all.

We didn't bring our own witnesses, so our witnesses were actually the couple getting married behind us.

He was like, "This better be the best damn food cart I have ever eaten." And then it was.

We got married at the courthouse in Charlotte [North Carolina]. We wanted to keep it local. We also kinda wanted it to be around Christmas time, so that we were each other's Christmas presents.

We went to a department store to try to find something that he could wear, and then I found this really, really cute dress. It was only $200, and then it turned out to be on sale when we got to the register — it was like 90 percent off. It was like everything was lining up.

After our ceremony, we went to a Halal cart. That was because in the summer when we started dating, we went on this weird, wild adventure, and [at the] end of it, he was ready to go home but I wasn't ready to let him. So I was like, "I've got to take you to this Halal food cart, it's the best street food you'll ever eat." It was raining, he didn't want to do it, and he was like, "This better be the best damn food cart I have ever eaten." And then it was, and that was when he decided he wanted to actually be in a real relationship and not just friends.

We kinda just wandered through the city with Charity Parrish of The Elopement Co., our photographer, to take pictures. We took in the city and had her photograph so we could remember the day. The pictures were really the only thing we kinda splurged on.

We eloped at the courthouse, which was great, 'cause they had this beautiful Christmas décor, like the giant Christmas tree and lights everywhere. It was kind of like they did the decorating for us.

He picked mine out for me, and you wouldn't know it, but it actually turned out to be one that was on my wish list anyway. It's really cute, it's got leaves [that are] wrapped around this little diamond, and it's rose gold. Then I got his and had it engraved. It says "No Regerts" which is an intentional typo. Like "No regrets," we don't regret anything that happened, we don't regret the really short engagement or going from dating to being married so soon.

What Was Exactly The Same

We had a photographer and rings.

What Was Entirely Different

I liked it a lot better than my first wedding, which was a big fancy wedding, a very traditional one in the church, and I did not enjoy it. At that wedding, I saw my now ex-husband [when I was] walking up the aisle and going through the vows, and then when the reception was through; I didn't see him for hours [in between]. We were just taken away from each other the whole time, busy talking to family members we hadn't seen in years. So I didn't really want to do that.

It's OK to be completely selfish with no guilt. Just do it — whatever you want.

I worried that he might feel he missed out on having the wedding because this is his first marriage, hopefully his last, but he doesn't even care.

How Our Guests Reacted

We actually didn't tell anyone until we were already married. We told them the day after. Our families seemed OK with it. It was like, "Why are you getting married so soon? Are you pregnant" "Nope. Not that. Just wanted to." That's how we left it. Surprisingly, no one was upset about the lack of wedding. Maybe because I have siblings, and he has a sibling, so it's not like we're only children and it's our parents only chance to see a wedding happen.

None, really. It all just went together super easily. But that's probably because we didn't really have to think about anything but me and him. It took all the difficulties out.

Just make it about yourselves as much as possible, because it's really the only day that you're going to have for just yourself, where people feel guilty if they interrupt that. So it's OK to be completely selfish with no guilt. Just do it — whatever you want.