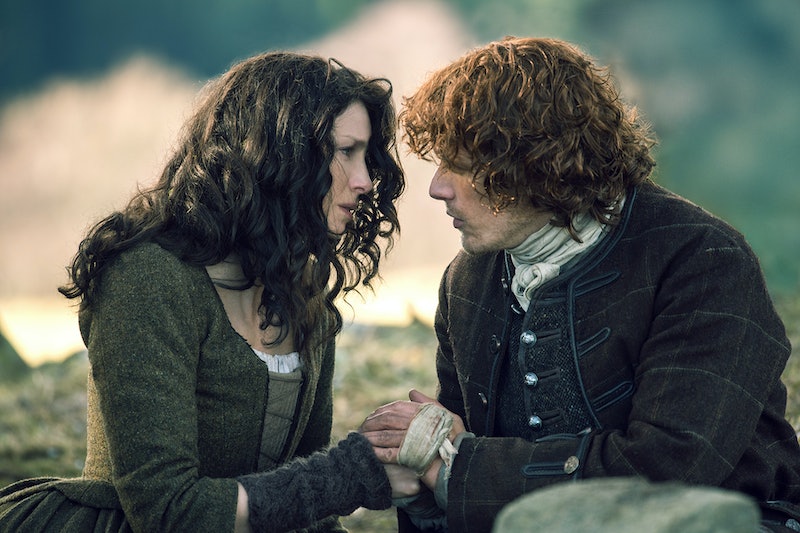 OK, Outlander lovers. I have good news and bad news. Bad news first: The Season 3 premiere date seems to be lost in the stones of time travel, because no one knows when Outlander will actually return. The good news: What's been revealed about the next season so far suggests it will not disappoint. Fans are patiently awaiting Claire (Caitriona Balfe) and Jamie's (Sam Heughan) reunion, which Balfe promises will happen. In the meantime, she tells me how much Claire has changed in the 20 years she's separated from Jamie. Time travel to the premiere is impossible, but there are always spoilers.

Season 3 will reportedly take on Voyager, the third book of the Diana Gabaldon series. Voyager picks up with a significant, 20-year time jump, when Jamie is missing Claire and Claire falsely believes that he's dead. But when Claire decides to return to Jamie after their long separation, she may not be the same woman she left him as.

The Season 2 finale shows a preview of an older Claire, but Balfe reflects on how her character has evolved emotionally as well. "We’re looking at a woman that’s 20 years older, so as an actor I really wanted to explore how that makes her different. Like, how has she changed?," Balfe says on the red carpet.

Something fans love about Claire is her strong will and stubbornness, but when Season 3 premieres, they may see a change of tune from the character. "I think, not always, but people generally — the harsher edges of their personality, they learn how to maybe smooth them out a little bit," says the 37-year-old. "So maybe Claire isn’t so stubborn, or she isn’t so quick-tempered. She’s learned how to control those urges a little bit."

Very interesting. I hope she doesn't get too soft, though, that's not her style. Plus, I wonder if and how that will apply to the highly-anticipated print shop scene. You know the one. Apparently, it is "beautiful," according to the actress, as Balfe's aware of the pressure to get it right. Additional reports suggest that Season 3 will also show more details of the Battle of Culloden and will explore Claire and Frank's (Tobias Menzies) relationship a bit deeper. And did I mention the print shop scene?

Whatever happens, I'm ready for it.