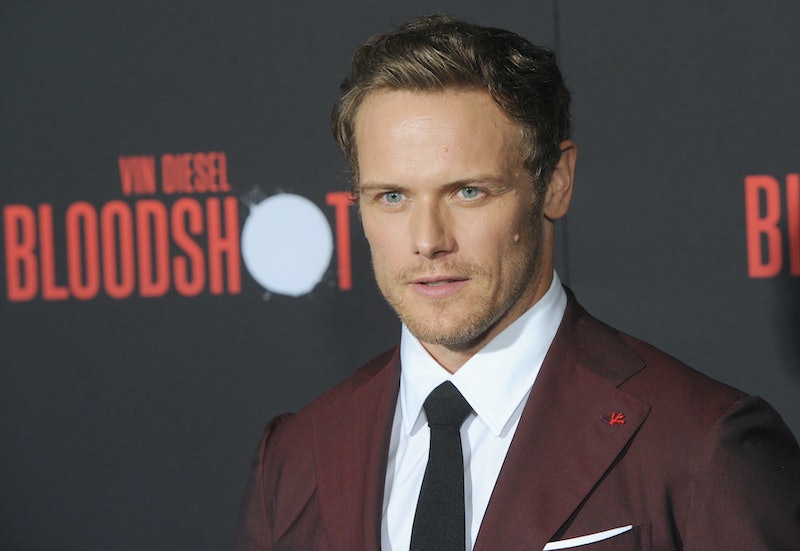 After enduring years of "bullying" and "harassment" from online trolls, Outlander's leading man had officially reached his breaking point. In a lengthy Twitter post shared on Friday, April 17, Sam Heughan revealed he's been harassed by Outlander fans for the past six years, and that the constant "bullying" has not only affected him, but everyone in his life. The actor also explained that it was the "false narrative" that he was disregarding advice about the current coronavirus pandemic that made him decide to speak out.

"After the past 6 years of constant bullying, harassment, stalking and false narrative[s] I am at a loss, upset, hurt and have to speak out. It's affecting my life, mental state and is a daily concern," Heughan began his post, adding that his "costars, friends, family, myself, in fact anyone I'm associated with" have also been affected by "personal slurs, shaming, abuse, death threats, stalking, sharing of private information and vile, false narrative[s]" over the years. He went on to say that he didn't want to speak up for a long time in the hopes that the harassment would eventually end, but Heughan now feels that he doesn't have a choice but to say something.

"Recently, these false claims vary from me manipulating fans, being a closet-homosexual, trying to mislead or extort fans for money and disregarding Covid advice. I've done none of the above," he wrote on both Twitter and his Instagram Story, before addressing the attacks about his reaction to the coronavirus pandemic in particular. Heughan was in Hawaii on vacation before nationwide shelter-in-place orders went out, and has decided to remain there for the foreseeable future.

"None of us knew how bad things would get but as the situation worsened, upon the advice of everyone I trust, I decided to remain in a safe environment," Heughan explained, before adding that he is "safe, isolated, putting no one at risk and am not a burden to the locals. ... We have not been asked to leave." The actor also added that returning home to the United Kingdom would actually be more dangerous for him, as spending "20 hours on a plane" and taking "3-5 flights" would actually put himself and others at risk.

In addition to setting the record straight about his quarantine decisions, Heughan also slammed the "bullies" who have allegedly "shared private information and abused my loved ones and I, consistently for the last six years on blogs and [social media]" and have allegedly been "sending items or stalking my private accommodation" as well as trying to hack into private email accounts. He also explained that he would take a much harsher stand on such behavior going forward: "I will not entertain it anymore and am blocking anyone that writes anything defamatory or abusive."

The Scottish actor wrapped up his post by noting that he wanted to use his social media accounts as a way to raise awareness of charities that need it and offer "a little entertainment or light relief." In the past few weeks, Heughan has been doing just that by posting workout videos from quarantine for his My Peak Challenge website, and posting about new Outlander episodes on social media.

He ended things by encouraging fans to "stay safe and please be kind" to others. And hopefully, by refusing to endure any more attacks and lies, Heughan will be able to see out the rest of his time in quarantine in peace and safety.