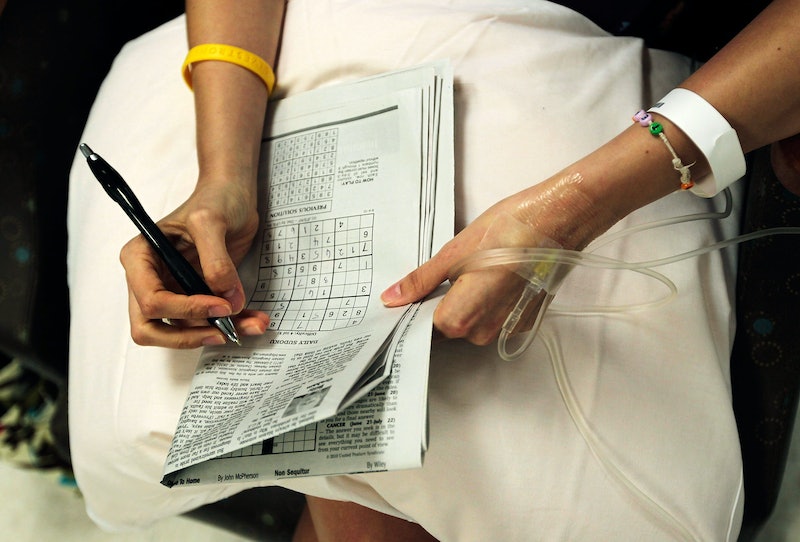 Bloating is super, super common — one study found that about 75 percent of Americans experience gastrointestinal distress. It can be caused by a lot of things and signify anything from PMS to food intolerance, but bloating can also point to something much more serious — persistent bloating can be a symptom of ovarian cancer, but most women aren't going to the doctor to get it checked out, according to new research.

The study, from Target Ovarian Cancer, a non-profit organization based in London, examined how women respond when faced with ovarian cancer symptoms and whether they'd seek help. The organization surveyed 1,142 women about persistent bloating. They found that only 34 percent of women would make a doctor's appointment if they started to feel bloated regularly. (The questionnaire defined regular bloating as "any unusual swelling/increase in the stomach areas that doesn’t go away.") Half of women would cut out gluten or dairy, start eating probiotic yogurts and drinking peppermint tea, or go on a diet. About 23 percent would take antacids in hopes of making the bloating disappear.

According to the Centers for Disease Control and Prevention, ovarian cancer is one of the most deadly cancers and needs to be treated in its early stages to increase the chances of full remission. If women are misdiagnosing themselves and not seeking professional help because they think their symptoms are caused by something innocuous, that lowers the chance of the disease being caught early on. Laura Everley, a 38-year-old who was diagnosed with ovarian cancer four years ago, shared her story with Target Ovarian Cancer. She wrote,

“Before I was diagnosed I was experiencing all of the symptoms of ovarian cancer, including bloating. I thought that maybe I might have irritable bowel syndrome because there are similar symptoms. I’d even tried going gluten free, but it had made no difference. The idea of cancer hadn’t even entered my head. You just never dream this is going to happen to you.”

Another finding from the study: Women older than 55 are less likely to Google their symptoms, which could make it harder for them to seek a doctor's opinion. When should you seek professional help about bloating? If you're bloated all the time, and not just after meals or around your period, it could signal a serious health issue, whether it's ovarian cancer or something else. If you suspect that you have ovarian cancer, there are other symptoms that you should know about. If you never feel hungry and always feel full, have to pee all the time and are feeling stomach pain, it's time to get medical help. Target Ovarian Cancer says that cancer symptoms will be persistent, new and frequent, so if your symptoms aren't going away and appear out of the blue, it's an even bigger cause for concern.

Until you see a doctor, there's no way to know if your bloating is a symptom of a serious condition or something you don't need to worry about. But with fewer than 1 in 5 women even aware that bloating is an ovarian cancer symptom, it's definitely something we need to talk about more frequently. We usually think of bloating as an annoying nuisance that makes it hard to fit into our clothes, but it could be a sign that your body needs to tell you something.