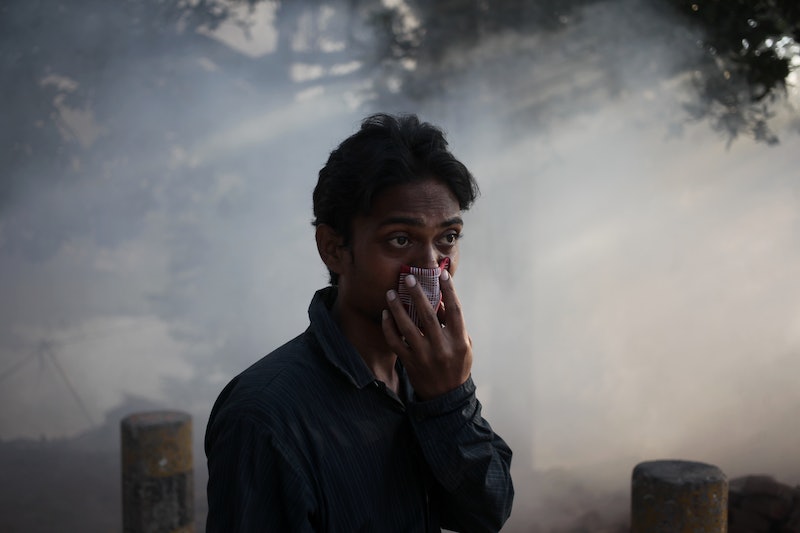 A day after the Trump administration began the formal process of withdrawing from the Paris Agreement, the latest report on climate change was released — and the news isn't great. The study was signed by over 11,000 scientists who warn that a "climate emergency" is taking place globally. And though the implications are far from heartening, there is a silver lining: the consensus among experts on the urgency of climate change is growing, and they have some solutions.

The study, titled “World Scientists’ Warning of a Climate Emergency," was published in the journal BioScience on Nov. 5 and backed by over 11,000 scientists' signatures. The study maintains that "policymakers and the public now urgently need access to a set of indicators that convey the effects of human activities" on climate change. Within the report itself are a number of graphs that explain climate change from several different perspectives; these data sets are comprised only of information that was "collected for at least the last 5 years, and updated at least annually," per the report.

The scientists' warning reads in part,

Scientists have a moral obligation to clearly warn humanity of any catastrophic threat and to 'tell it like it is.' On the basis of this obligation and the graphical indicators presented below, we declare, with more than 11,000 scientist signatories from around the world, clearly and unequivocally that planet Earth is facing a climate emergency.

But this announcement isn't just a warning: it also provides a stark call to action, in the form of various recommended policy objectives for the world to take on.

These objectives include policies that strengthen human rights (like family-planning services for women); the implementation of "massive energy efficiency and conservation practices," as well as the total replacement of fossil fuels; the reduction of "short-lived climate pollutants" like methane; the enhanced protection of the world's resources, like coral reefs and forests; the collective societal shift towards a diet comprised of plant-based foods; the stabilization of the world's population; and more.

Though this does mark the first time a mass group of scientists has labeled climate change an "emergency," per The Washington Post, the report isn't all doom-and-gloom. In addition to providing lengthy explanations for how the international community can combat climate change, the report suggests there's hope if people take action. The scientists write,

The good news is that such transformative change, with social and economic justice for all, promises far greater human well-being than does business as usual. We believe that the prospects will be greatest if decision-makers and all of humanity promptly respond to this warning and declaration of a climate emergency and act to sustain life on planet Earth, our only home.

The report is available in full here. If you're still hankering for more information after that, you can read this breakdown of climate change from five climate scientists, and learn more about how to individually help combat the effects of climate change. Last but not least, feel free to keep an eye on what the 2020 presidential candidates are saying about climate change, and use your vote to elect someone who will prioritize implementing solutions.

More like this
6 Organizations Fighting Police Brutality That You Can Support Right Now
By Syeda Khaula Saad and JR Thorpe
An Expert Weighs In On The Viral Raw Carrot Salad Trend
By Alexis Morillo
How Ovulation Affects Your Sense Of Smell, Libido, & More
By JR Thorpe and Lexi Inks
The 8 Best Crystals For Meditation, According To A Healing Energy Practitioner & Meditation Teacher
By Lauren Moison
Get Even More From Bustle — Sign Up For The Newsletter
From hair trends to relationship advice, our daily newsletter has everything you need to sound like a person who’s on TikTok, even if you aren’t.