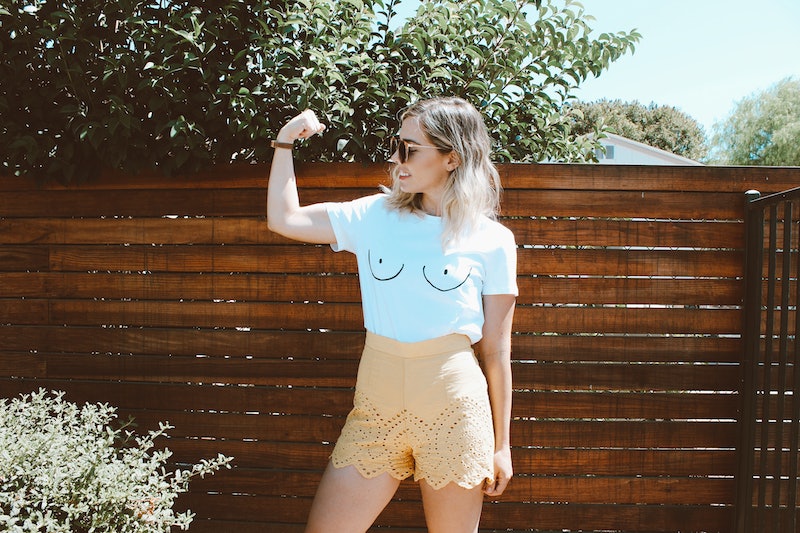 In Bustle's Braving BRCA column, writer Sara Altschule discusses the hot debate in the breast reconstruction community — over the muscle or under the muscle implants. Spoiler alert: it's more complicated than you think.

Undergoing a preventative double mastectomy six months ago wasn’t an easy decision for me to make. After I found out I was BRCA 2 positive — meaning, my breast cancer-preventing gene had a mutation — and that I had an 84% chance of developing breast cancer in my lifetime, my brain wasn’t ready to make any serious decisions. In the beginning, I was still in shock mode, or what I like to call "crying all the time" mode. After meeting with a genetic counselor, Googling my questions to no end, and setting up consultations with different surgeons, I finally came to the conclusion — I was ready to take on a double mastectomy with reconstruction, which would lower my chances of developing breast cancer by 95%.

I thought this was the only decision I needed to make, but I was wrong. There were so many choices and options that I had to navigate throughout my pre-surgery months. One of the biggest choices I needed to decide on was if I wanted to have my implants under the muscle or over the muscle. Essentially, you can choose if you want the implant placed under or over your pectoral muscle during the reconstruction phase (after the breast tissue is removed).

When I first heard about this under the muscle versus over the muscle debate, I was overwhelmed. I had a choice where the implant got placed? I was also able to select the shape of the implant I wanted and the firmness. Any control I could have over my body was comforting, but it was also confusing because I'm no doctor. I'm only guessing what I think would work best.

Thankfully, I knew where to turn. I started talking to many women who'd undergone both kinds of procedures. In the last four decades, most breast reconstruction that involved implants was done under the muscle. Dr. Constance Chen, a board-certified plastic surgeon with a specialty in breast reconstruction, states on her website, “the rationale was that by placing an implant underneath the pectoralis muscle, there was an extra layer of tissue between the implant and the outside world to prevent the implant from becoming exposed.”

The reason it's a hot topic is that surgeons have now advanced their techniques to place the implant over the muscle, which decreases pain and recovery time for their patients. But, because it's a relatively new procedure, there haven't been many studies conducted on the long-term outcomes of this technique. That's why many people will still opt for an under-the-muscle procedure. My surgeon was more technically skilled in performing under-the-muscle reconstruction and hadn't done as many over-the-muscle operations, so I felt more comfortable having her do what she knows best.

Here's how it works: During a mastectomy, after the breast tissue is removed, a plastic surgeon creates a little pocket behind the chest muscle and then inserts a tissue expander or an implant. This can result in a very painful recovery process because you have to literally stretch the muscle to make room for the implant. (And yes, that's a whole other debate — whether or not to go direct to implant, where the breast tissue is removed and the implant is placed in one procedure, or have tissue expanders placed to stretch the breast skin and muscle, then later have the implant placed.)

Since I’ve gone through this type of procedure firsthand, I can verify it isn’t a walk in the park, but it’s also not the excruciating pain that I was anticipating. The recovery period is longer with this method compared to over-the-muscle because again, the muscle is being manipulated and stretched to make room for the implant. Ouch is right.

Another downside that I wish more people and doctors talked about is an issue that happens to a lot of people who go under the muscle: animation deformity. Basically, after surgery, when you flex your chest muscles, your breasts move as well. Not exactly the party trick you were hoping for, right? I’ve talked to some women who don’t have this problem at all and others who suffer from this issue a great deal. And worse, they say their doctors never told them that could even happen. Personally, I’m lucky that this isn’t an issue for me. However, what I do not love is the feeling I get when I push or pull anything really heavy. It's not painful, it's more of an awkward feeling. This is how I best describe it: it feels like someone is pulling my chest muscle to my armpits. Doesn't sound quite lovely, right? Goodbye, pull-ups. I never liked you much anyway. Apart from being uncomfortable, it’s a constant reminder of what I went through and sometimes I don’t want that damn reminder.

Going through the breast reconstruction process is overwhelming. And even that word is quite the understatement. With all of the choices and the options you have to navigate, it’s hard to know what the “best” answer is. What I’ve learned throughout this whole process is that one person’s experience won't be the same as another's. We all have different bodies and we all react differently when our bodies are healing. While one person might love their under-the-muscle implants, another might wish they'd gone over instead. (And yes, it's possible to switch where the implant is placed later on.) The most important aspect to take away from this is to do your own research, ask as many questions as you can, and listen to your gut. You are in charge of your own body — you make the final decision.