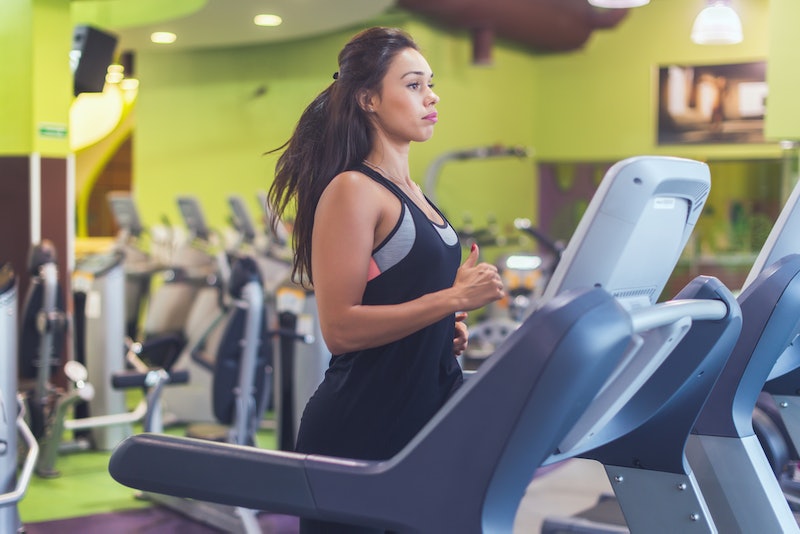 If you're a gym-going human, you've probably heard horror stories about overtraining, aka when you train too hard and overload both your muscles and your nervous system. And now, scientists have discovered a perhaps unexpected result of overtraining. A new study found that exercising too much can lead to burnout, CNN reported.

The study, published in the journal Current Biology, found that people who overtrain in the gym become more likely to seek immediate rewards, over delaying gratification. This might seem surprising to people who associate working out with having a lot of discipline. But the study found that even when you're functionally making decisions after overtraining, your brain power's capacity remains limited. Instead of increasing your self-discipline, then, working out too much might just decrease it.

While all of the study's participants engaged in a nine-week training program, one group was asked to overtrain during three of those weeks. Overtraining in the gym means working so hard in each session that your body doesn't have the time or rest it needs to heal and bounce back even stronger before you go at it again. So if you run a three-mile loop one morning and try to have a heavy leg day the next, for example, your body probably won't have enough time to recover in between. And if you make a habit of this kind of intense work, you might be at risk of exercise burnout.

After the participants overtrained, MRI scans showed that the part of their brain that is responsible for executive control and decision-making, the lateral prefrontal cortex, was fatigued. As a result of this fatigue, burnt out participants were more likely to choose immediate satisfaction over a bigger reward down the road. The study concluded that too much work in the gym taxes your cognitive willpower so much physically, that it doesn't leave much left for other, non-gym-related life decisions.

These findings are perhaps unsurprising, given what gym enthusiasts and scientists have long understood about the dangers of overtraining. A 2018 study published in the journal Sports Open found that the symptoms of overtraining are often indistinguishable from depression. According to the American Council on Exercise's website, these symptoms of overtraining can include extreme fatigue, moodiness, irritability, and a profound lack of motivation.

And a 2018 study published in the Journal of Science and Medicine in Sport found that elevated levels of stress hormones in individuals who were burning out in the gym, even when they were experiencing stress that wasn't related to exercise. And, if you've ever had a tough day, you know that heightened sensitivity to stress can make you want to reach for the closest and most immediately comforting thing, even if buying new jeans isn't necessarily what your wallet would want in the long run.

But lest you fear that a few solid training sessions a week is going to kill your self-control outside of the gym, it's important to remember that the study only looked at 37, male, elite endurance athletes, meaning these results might be different for people of different genders, or if there was a larger number of people studied. Further, regular training for these athletes is much more intense than training for your average gym-goer. So burnout for these athletes is in a different ballpark entirely from the levels of work that might induce overtraining symptoms in a more casual athlete.

In fact, according to a 2012 study published in the journal Physiology and Behavior, working hard in the gym can actually increase your effectiveness at making long-term decisions as opposed to short-term, immediately gratifying decisions. And a 2019 study published in the journal Public Library of Science: One concluded that the more often you engage in moderate levels of exercise, the more you can improve your cognitive decision-making skills.

So it seems that working out hard can help your brain and your decision-making, while working out too hard can hurt your sense of discipline and long-term self-preservation. What's the solution? Paying attention to your body and your progress in the gym can help. If you hit a plateau, or your performance in the gym decreases while your fatigue outside the gym increases, it might be time to take a step back and rest your body. Because resting your body will apparently help your mind, too.