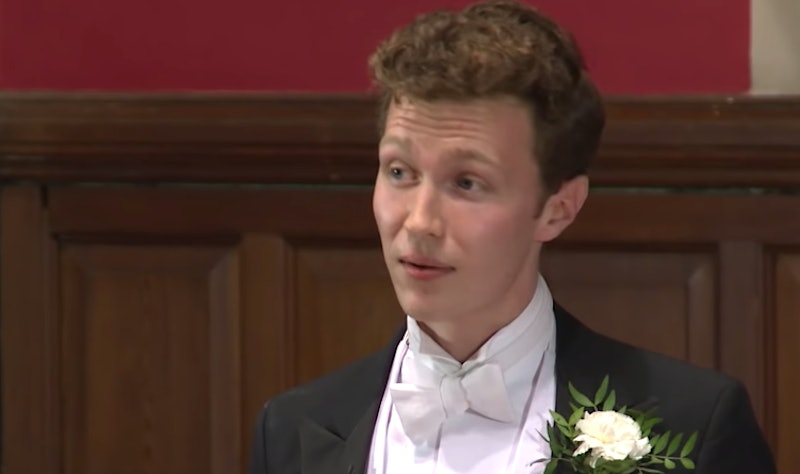 Brendan McGrath, the President of the Oxford Union has resigned. This comes after his response to a visually impaired student being dragged out of a debate event held by Oxford Union last month. Ghanaian postgraduate student Ebenezer Azamati was pulled from his seat by security on 17 October after trying to return to his reserved place at a debate held by the Oxford Union in Frewin Court.

The 25 year-old student had reserved accessible seating prior to the event as he was concerned there wouldn’t be enough provisions for disabled people. According to the BBC, when he tried to return to his seat he was confronted by staff, after which he tried to use a seat that was offered by another member of the Union, but staff attempted to remove him.

In the video footage, it shows the blind student being pulled from his seat by two members of staff and, according to The Guardian, he was allegedly “dragged by his ankles.” In a statement given to Bustle, an Oxford University spokesperson said of the matter:

Oxford University shares the widespread outrage at the Oxford Union’s treatment of one of our students, Ebenezer Azamati, who has our full sympathy and support. The Oxford Union is an independent private debating club which is not part of the University. The University is writing to the Union, pressing hard for answers on how it intends to make amends to Mr Azamati and what further steps it will take to avoid such an incident being repeated.

But instead of receiving an apology after the incident, the Union's president, Brendan McGrath, called for a disciplinary meeting in which Azamati was charged with “guilty and violent” conduct, and had his membership revoked, The Guardian reports. The charges against him have since been dropped. But he told the BBC that he subsequently feels "unwelcome in the union, Oxford and even the country."

In a letter posted on the Oxford Union Facebook page, Brendan McGrath apologised for all of his “shortcomings” and “mistakes,” but claimed claimed he was advised to bring disciplinary action against the student as the president. In the letter he stated: “I was asked, on the basis of accounts from those present, to bring a disciplinary complaint against Mr Azamati on behalf of the member of staff.” But he continued that the right response shouldn’t have begun with “prosecution and apportioning blame.”

The resignation comes after Oxford's Africa Society spoke out about the Union president and the incident. In a statement on their website, the society said it “strongly condemns the violent, unjust, inhumane, and shameful treatment of our member.” They also stated that the president should “consider his position given that he his conduct on this matter renders him unfit to assume the position of responsibility.” Bustle is still awaiting comment from Oxford University Africa Society.