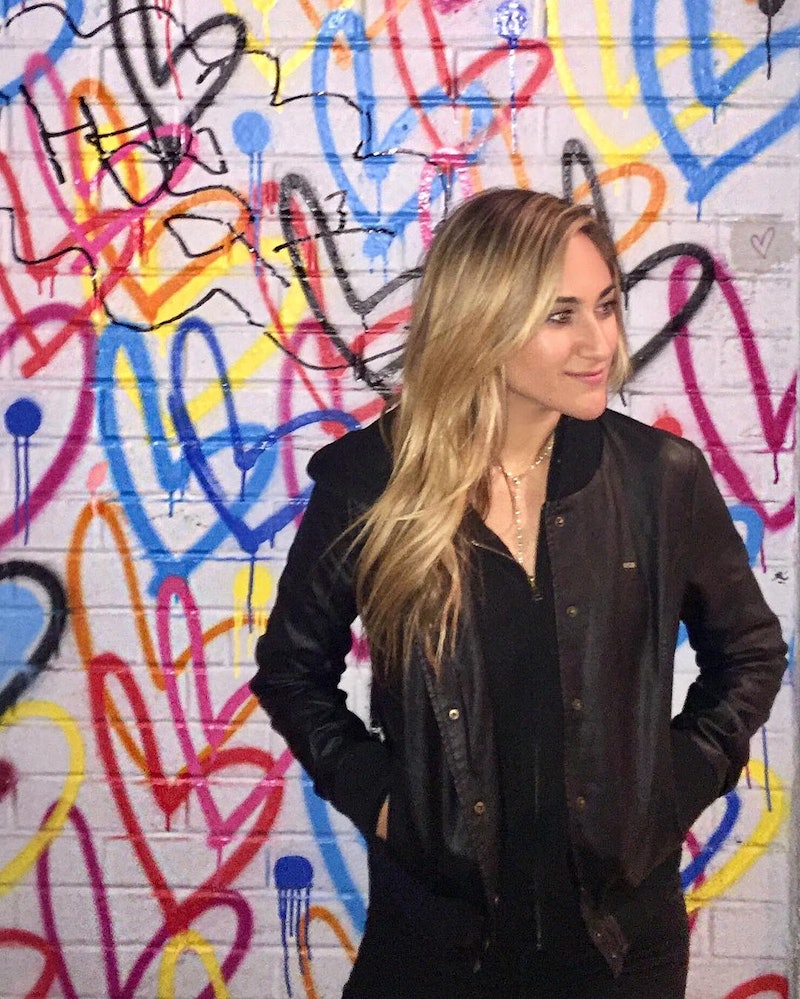 Perhaps you've heard of Paige More, the 24-year-old woman who Instagrammed her double mastectomy. While her Instagram account, @paige_previvor (a previvor is a survivor of a predisposition to cancer but who hasn't had the disease), has garnered more than 15,000 followers in just three months, that's not the whole story. By sharing her very personal journey publicly, this self-admitted behind-the-scenes private person, has gone from "worrier to a warrior," and started a dialogue with her friends, family, and perfect strangers about her experience living with the genetic mutation BRCA1. By posting not only her triumphs, but also the scarier moments that generally don't make it onto often carefully curated social media accounts, this accidental Instagram influencer is embracing who she is at every step of her journey.

When she first learned she tested positive for the BRCA1 gene mutation, More, who works for Good Morning America and lives in New York City, says she felt totally alone. "There was nothing. There was no one," she tells Bustle in an interview. "My mom doesn't have it; there was no one for me to relate to."

More's story is harrowing, empowering, and, most importantly, ongoing. It doesn't shy away from some of the messier parts of navigating your options once you test positive for the BRAC1 gene mutation — which means you have a 55 to 65 percent chance of developing breast cancer by age 70 (people in the general population have an 8 percent chance) — and what it's like to make a decision to undergo a double mastectomy at age 24. Perhaps most important of all, More's decision to share her experience has offered a lifeline to other young people who previously felt alone.

When More's sister found a lump in her breast, which in the end was not cancerous, it was enough for her mother, who was not a carrier, to encourage her father to get tested for the BRCA1 and 2 gene mutation. Her father tested positive, and while her sister tested negative, More decided to take the test, too.

"You basically just spit in a tube," she tells Bustle. "I didn't even really think about it."

When her doctor called to tell her she tested positive for BRCA1, which carries a higher risk for developing both ovarian and breast cancer than BRCA2, she says the news didn't register right away.

"I said, 'OK, now I have to get back to the real news,'" says More, referring to her work on Good Morning America.

In truth, More wasn't entirely sure what she was dealing with. Angelina Jolie, who also tested positive for BRCA1, wrote about her decision to undergo a preventative double mastectomy in the New York Times in 2013, which helped bring the discussion of BRCA1 and its treatment into the mainstream; however, despite the growing conversation, More felt isolated while trying to navigate her options because she didn't have anyone to connect with who had tested positive for the BRCA1 gene mutation. Three months later she sat down with her doctor to discuss whether she wanted to undergo "intense surveillance," which includes regular checkups, mammograms, and blood work, or a preventative double mastectomy.

"Surveillance felt like I was just waiting around to get cancer," More tells Bustle, yet she says she still wasn't sure that getting a double mastectomy in her 20s was the right choice either.

"Then I talked to Dr. [Kristi] Funk who had done a segment on the show [Good Morning America]," More says.

Funk, board-certified surgical breast specialist who founded the Pink Lotus Breast Center in 2007 with her husband and business partner Andy Funk, has helped thousands of women through breast cancer treatment, including well-known celebrities like Jolie and Sheryl Crow.

More, who was already leaning toward the preventative mastectomy, asked Funk for her opinion, and Funk recommended the surgery. "It felt so good to hear it from a doctor," More tells Bustle.

Determined to be in the best physical shape she could in order to strengthen her body for the surgery, More began "training for her mastectomy." She worked out, ate as healthily as she could, went on a "ta-ta to the tatas" vacation with her family, and took her breasts out for one last night out on the town in a low-cut top in advance of her January 2017 surgery. While she never planned to publicly document her journey, she was inspired when her boyfriend asked if he could share a photo of her on social media stating how proud he was of her decision.

"There's a reason I'm a producer," she says. "I'm not usually open to being so vulnerable. I'm more behind the scenes. And, not only had I not talked about it publicly, I hadn't even shared most of my fears with my family and friends."

But More found that starting a public dialogue reduced the pressure of having to be strong all of the time, and eased some of her anxiety about putting the entire burden of her experience on her family. Additionally, it also helped them understand what she was going through.

And then something else happened. More, who had found almost no resources and no one who could relate to what she was going through when she received her diagnosis, was overwhelmed with support on Instagram through her account @paige_previvor.

In addition to support, she received (and continues to receive) hundreds of messages from other people facing the same challenges and decisions. While there was no platform for More to connect with others when she made her decision, she unintentionally created one. Now these "breast friends" communicate online (More responds personally to every message and connects people with each other, too), and even meet in person at "breasty" events.

She likened meeting some of her new breast friends for the first time to going on a blind date when she invited some folks she'd never met in person to meet her for dinner.

"I was like, are they going to recognize me?" More laughs. "When they showed up I was thinking, I can't believe there are 12 of us in the city going through this. And, at the end of the night I realized I had 12 new friends."

Now, More, along with her trusted friend and advisor Sammi Edelson, is committed to partnering with brands that are "all about feeling good, self love, and being comfortable in your own skin," Edelson says. "Paige's story is ever evolving, and the conversation is ongoing."

Since she has the BRCA1 gene mutation, More will also undergo intense surveillance to mitigate her risk for developing ovarian cancer. Because she is only 24, and wants the option to have children, surveillance makes the most sense for her now. The National Comprehensive Cancer Network guidelines recommend removal of ovaries and fallopian tubes between age 35 and 40, and as soon as you are finished having children for those who test positive for the BRCA1 gene mutation. By getting the preventative mastectomy More says she won't have to undergo surveillance for breast cancer, thus cutting in half the amount of time she'll spend at the doctor.

"If I did surveillance for both I'd basically be living at the doctor's office," she says.

While she is providing love and support to virtual strangers, the person More is most proud of being a role model for is her 13-year-old sister, who rightfully thinks her big sister is a hero.

For those who test positive for the BRCA1 gene mutation who opt for the surgery, the mastectomy is not the end of the story. There are complex emotions to navigate, decisions about reconstruction (More is currently exploring the overwhelming world of breast implant options), and an important mental and physical recovery process that is individual to each person.

More says her scars are sexy. To remind herself of that on days when she is feeling down, she taped a "scars are sexy" note to her mirror. She recommends others put their mantras on their mirrors, too, to reinforce self love, practice meditation, and cultivate fitness routines.

"Self love is so important for all of us," More says. "You need to accept yourself for exactly who you are, and I'm training myself to love the new me."

More like this
This Psychological Effect Might Be Keeping You From Hitting Your Goals
By Lexi Inks
Rachel Zegler Reveals She Had Breast Cancer Scare
By Radhika Menon
I Tried The Air Up Water Bottle, Which Flavors Your Drink With Scents
By Carolyn Steber
How Yin Yoga Delivers TLC To Tight Muscles
By Carolyn Steber
Get Even More From Bustle — Sign Up For The Newsletter