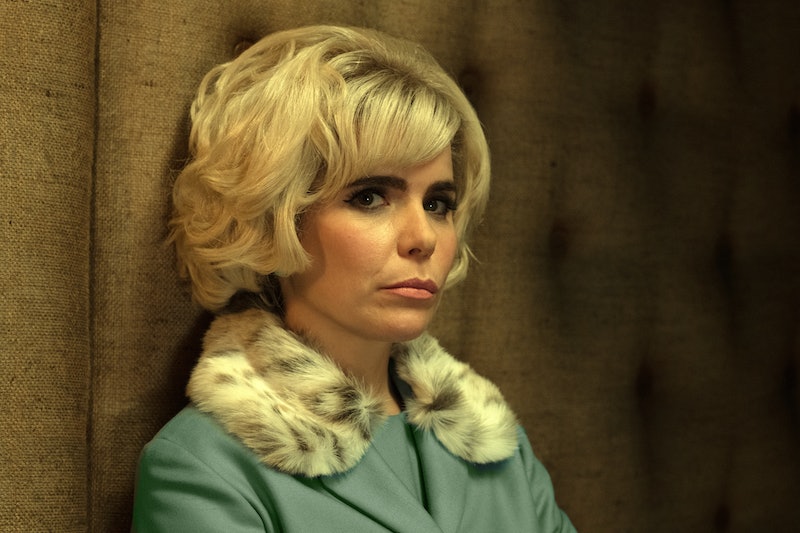 The first thing I noticed about Paloma Faith when we spoke over the phone a few weeks ago is her ability to make you feel at ease. She’s impossibly warm, which means her new role in DC Comics' Pennyworth may come as a bit of a shock to fans of the BRIT award winner's music. The ten part series is set to come to the UK later in 2019, with Faith starring as the formidably cruel villain Bet Sykes. "My initial reaction was [that] this character is speaking to me in a way that not many scripts have," Faith explains of what drew her to the part. "She’s very complicated and that’s what excites me."

"I’ve never been violent in my life but I feel like it’s some of the best therapy I’ve ever had."

Pennyworth is set in London in the 1960s and tells the story of former SAS Soldier Alfred Pennyworth, who you'll recognise as the man that goes on to be butler to Bruce Wayne in the Batman series. Every good hero has its villain and that’s where Sykes comes in. “In my view, there’s a thin line between a hero and a villain in DC comics,” she explains. “I think there are a lot of similarities between her and Alfred. They’re both potentially serving other people but they’re both also very individualistic. They believe all of their motivations have come from themselves and, it’s relatively personal but when you see the bigger picture, they’re actually pawns in a bigger game.”

The strength in Faith's performance comes from her willingness to empathise. She avoid casting Sykes as a stereotypical comic book villain, instead leaning on a theatrical, almost casual, cruelty. "She’s not just powerful and maybe a bit scary, there’s a person in there and she has vulnerabilities," Faith explains. "Superficially, yes she can be a little bit threatening, but deep down, I think she’s a lovable person.”

"London's a pretty violent place when you’re growing up in those circumstances."

So how did it feel playing such a devious character? “I quite liked it,” Faith laughs. “I found it quite cathartic. I’ve never been violent in my life but I feel like it’s some of the best therapy I’ve ever had.” While Faith's own proclivity for violence might be low, she did draw on her own real life experiences for the role.

“I was brought up in Hackney and went to state school. My childhood at home wasn’t always perfect,” says Faith. “Without giving too much information, I was drawing from my own childhood experiences and what violence I have seen growing up.” She continues:

“I know what a fight looks like and I know how to execute one because London's a pretty violent place when you’re growing up in those circumstances.”

Faith admits that her childhood, and particularly the influence of her mother, has been the driving force behind her success. “My mum led by example, being a child of a single mum,” she says. “I admire her so much, seeing her work ethic, how hard she worked, and being aware of the hours she put in to provide me with opportunities.”

Faith had a child in December 2016 and is now a working mother herself. The experience, along with the difficulties that come with holding down a career and having a baby, have changed her perspective. “I was always a feminist, but I never really understood the imbalances until I had a child because the job is so hard and it’s much harder than anyone ever acknowledges.” She continues:

Becoming a mother also inspired Faith to produce some of the best work of her career. Her fourth studio album, The Architect, was released in November 2017 and charted at number one in the UK. It included tracks about kindness, the environment, and even Brexit.

“I’m addicted to my own personal definition of what success is. So, I set myself targets and then I won’t stop until I get there. I feel like that’s something quite innate in me,” she says. “Now I’ve got a child I want to forever lead by example and I want my child to see what hard work looks like and what rewards it brings. Not just financial, but work makes me very happy.”

More like this
Your Guide To Watching 'Everything Everywhere All At Once' In The UK
By El Hunt and Sophie McEvoy
Rupert Grint Just Shared A *Major* Update About Ron Weasley’s Future
By El Hunt
Twitter Is Overjoyed By Angela Bassett’s Record-Making Oscar Nomination
By Maxine Harrison
Anne Hathaway Shared A "Thrilling" 'Princess Diaries 3' Update
By Darshita Goyal
Get The Very Best Of Bustle/UK
Sign up for Bustle UK's twice-weekly newsletter, featuring the latest must-watch TV, moving personal stories, and expert advice on the hottest viral buys.