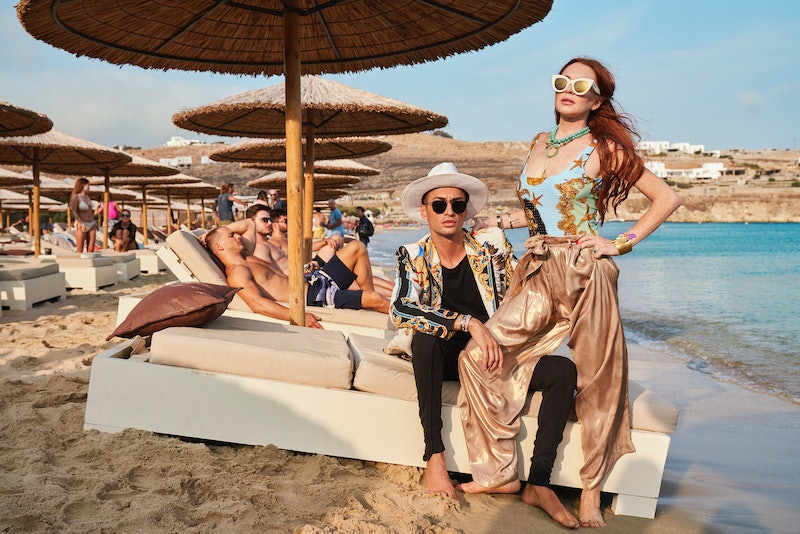 If there is one lesson that is present in nearly all of Lindsay Lohan's movies, it's that everything in life is easier when you have someone you can trust by your side. That is exactly the role that Lohan's business partner Panos Spentzos fills in Lindsay Lohan's Beach Club, the new MTV reality show that takes viewers into the day-to-day hustle of operating the Lohan Beach Club in Mykonos. While Lohan is best known for her film roles in addition to simply being Lindsay Lohan, Panos Spentzos is not the household name that Lohan is. Luckily, Panos Spentzos Instagram feed will allow curious viewers a peek into the life of the Beach Club boss.

There's not much known about Spentzos outside of his involvement with the Lohan Beach Club, and his earliest Instagram images with Lohan are from the summer of 2018, indicating that their collaboration is a direct result of Lohan's decision to lend a Beach Club her own name. Spentzos seems to be familiar with the area, however, referring to Mykonos as "my island" among his many travels that he has documented on IG, showing Spentzos traveling all over the world from New York to Switzerland and plenty of other locations in between.

While travelling has been a part of Spentzos' life since the beginning of his IG feed, and very likely before that as well, something that Spentzos has clearly stepped up in the past few years has been his fashion game. Obviously, someone who is going to be seen next to Lindsay Lohan with some frequency are going to want to come correct fashion-wise, which is something that Lohan has been doing for years. Spentzos' Instagram show him adorning himself in floral prints, stylish Dubai-inspired ensembles, and patterned shawls that manage to walk the line between loud. attention-grabbing pieces and being the results of seemingly effortless outfit construction.

Spentzos' penchant for all things eye-catching could be exactly why he's effective enough to be hired as the boss of Lohan Beach Club, a location with gorgeous views on display on its TripAdvisor page, along with a variety of stellar reviews. Melissa Sarah of Singapore says that "The ambience was awesome. Very chill with good music. The water was so clear and clean! That really did it for me."

It's not clear how much of Spentzos' influence is present in the design of the Beach Club, but his appreciation for visual aesthetics surely comes in handy when trying to maintain a visually appealing resort.

Panos Spentzos may never be as famous as Lindsay Lohan, but Lindsay Lohan's Beach Club makes it clear that the club would not be half of what it is without Spentzos there are Lohan's trusted advisor. Despite all the drama that comes from filming a reality show somewhere that is also an actively functioning workplace, Panos Spentzos seems perfectly poised to provide luxurious experiences to anyone who happens to visit "his island" of Mykonos, even if they don't realize the club is co-owned by someone who was in Freaky Friday.