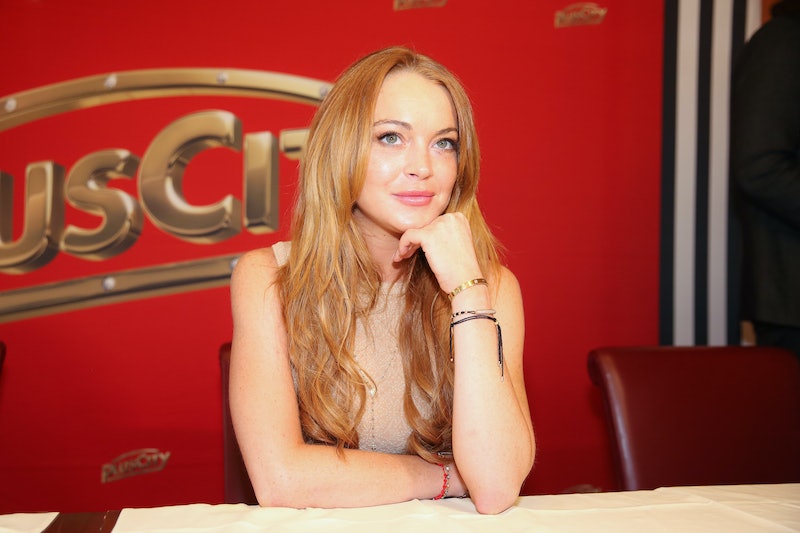 Oh, Lindsay Lohan. The once-promising superstar spectacularly derailed at the height of her fame and she's been scratching and crawling her way back, no matter how much crap she gets under her fingernails and stumbles in the process. Most recently, though, Lindsay Lohan is on the cover of Wonderland mag, looking her very best. Draped in Gucci, Marni, Hermes, and Prada threads, Lohan looks utterly ethereal. Despite her issues, Lohan was once a fashion influencer whose style was copied by the masses. Although recently accused of stealing the idea for a shopping app, the oft-flustered Lohan is in London, starring in a play and still commanding a cover.

On the cover, Lohan even lets her famous freckles show. She also drops a lot of designer names in the piece, claiming that Isbael Marant, YSL, and Chanel pieces are spilling out of her closets. Granted, she could have received those as gifts or on shoots, but is this an indication that Lohan really is engineering a fashion comeback?

We already know that her career has pretty much stalled despite efforts to resuscitate it. Her leggings line was felled by a lawsuit. Her tanning spray brand petered out... and was also part of a lawsuit. While her life and look have been a bit, well, let's just call it "messy," in recent years, she still has great taste, claiming her preferences are Hermes, Karl Lagerfeld, Hedi Slimane, Miu Miu, for whom she once modeled, Chloe, and Harry Winston.

The fact that the designers lent clothes to Lohan for this particular mag shoot is not uncommon. But it also suggest that she is not fashion kryptonite and that houses still want to dress her. The gossip media is always ready to pounce on an easy target like Lohan and anything she does gets widespread coverage, which means more publicity for the clothing and the designer, even those that are well-established and not in need of tabloid-y press.

Also, remember when an image of Kate Moss doing a bump was splashed on the cover of a British tabloid? Some of her modeling contracts were immediately terminated, but she was picked up by others as quickly as she was dropped. Kate-doing-coke didn't kill her career and huge name designers did not fear being associated with her. Could Lohan receive the same treatment? And is she? It wouldn't be unheard of, you know?

There have been rumors that La Lohan is broke, so either she has hoarded lots of clothes from when she was the biggest star in the world or designers are still gifting her. From this piece, it seems that she doesn't have a full-time stylist or glam squad hitting showrooms and pulling for her at every turn, either. So it sounds like designers might continue to harbor a thing for her.

Lohan, who confessed that she had her own custom Chanel suit at age ten (!!!) for The Parent Trap, named leather jackets and boots as her favorite pieces, and said that sleeping, drinking water, and meditating are her biggest beauty essentials. Let's hope she is putting those suggestions into practice, since it's been a rough few years for her.

All in all, who doesn't love a comeback? The public does. The media does. Designers do. If this Speed the Plow theatre engagement goes right, Li Lo could end up being invited to do a campaign for a huge design house. Maybe Versace? Alexander Wang? Those seem like the right places for her, especially since she's rocked a Donatella blonde 'n' bronze look in the past.

But the fact that Lohan is still so informed about fashion and looks the best she has in years on her Wonderland cover make me think La Lohan might return to an enviable fashion perch in 2015. There's no denying she did influence fashion. She can be credited with shepherding leggings to prominence and popularizing skinnies with flowy, peasant tops in the '00s, and for helping the Balenciaga motorcycle bag attain "It" status.

Here's to hoping we see the best of Lindsay Lohan back again soon.