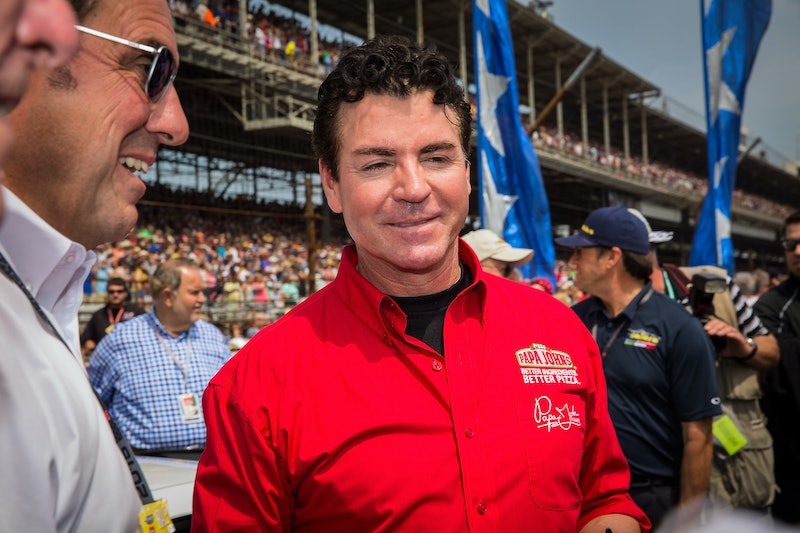 Pizza mogul John Schnatter is officially stepping down from his role as board chairman of Papa John's. The founder resigned after using a racial slur on a conference call, for which he later apologized. As Forbes first reported on Wednesday, Schnatter acknowledged that he used the n-word and described violence against African-Americans in an insensitive way during the May conference call.

And get this: The whole point of the conference call was apparently to teach Schnatter how not to be offensive — he was being put through “role-playing” training that was supposed to help him handle racially sensitive situations, as Forbes reported. This had to do with a faux pas from last year, when Schnatter blamed declining pizza sales on NFL protests that involved players kneeling during the national anthem.

At the time, Schnatter said that ratings were going down because of the “polarizing” protests against police brutality, and it was causing his business to suffer because Papa John’s bought a lot of NFL ads, The Washington Post reported. This was all a precursor to him stepping down as CEO of Papa John’s last year, and ultimately lead to the fateful sensitivity training phone call in question.

Forbes was first to report on the details of the phone call. The publication noted that when Schnatter was asked how he was going to distance himself from racist groups on the Internet, he responded: “ “Colonel Sanders called blacks n-----s.” He then reportedly complained that Sanders didn’t face backlash for that, and downplayed his own comments about the #TakeAKnee movement.

And that wasn’t the end of his offensive comments on the call. Per Forbes’ report, Schnatter also talked about growing up in Indiana where he alleged that people would drag African Americans from trucks until they died. He said this with the intention of conveying his aversion to racism, but according to Forbes, “multiple individuals on the call found [the remarks] to be offensive.”

In an emailed statement to Forbes, Schnatter admitted to his racially charged remarks. “News reports attributing the use of inappropriate and hurtful language to me during a media training session regarding race are true,” he said in the statement. “Regardless of the context, I apologize. Simply stated, racism has no place in our society."

The mayor of Schnatter’s hometown even removed the pizza tycoon’s name from the city’s basketball gym. The Courier Journal reported that the mayor, Mike Moore, who apparently grew up with Schnatter and considers him a friend, said that "The city of Jeffersonville represents a very diverse community… It was a tough decision, but I believe it was the right decision."

ABC News also reported that the pizza company’s shares fell almost 5 percent after the Forbes story broke. Them University of Louisville announced in a tweet that Schnatter resigned from its board of trustees.

On top of all this, Yahoo reported that the MLB suspended a promotional deal with Papa John’s in which they called grand slams “Papa Slams,” and gave baseball fans 40 percent off their order at the pizza company the day after a game using a coupon code.

Schnatter started Papa John's in Indiana in 1984 after turning a broom closet in his father’s tavern into a makeshift pizza place, Entrepreneur reported in 2014. As the company garnered recognition as an international pizza franchise, Schnatter made himself the face of the company, appearing frequently in ads.

Now the company is going to need a new, less controversial front man — and probably a killer PR strategy.