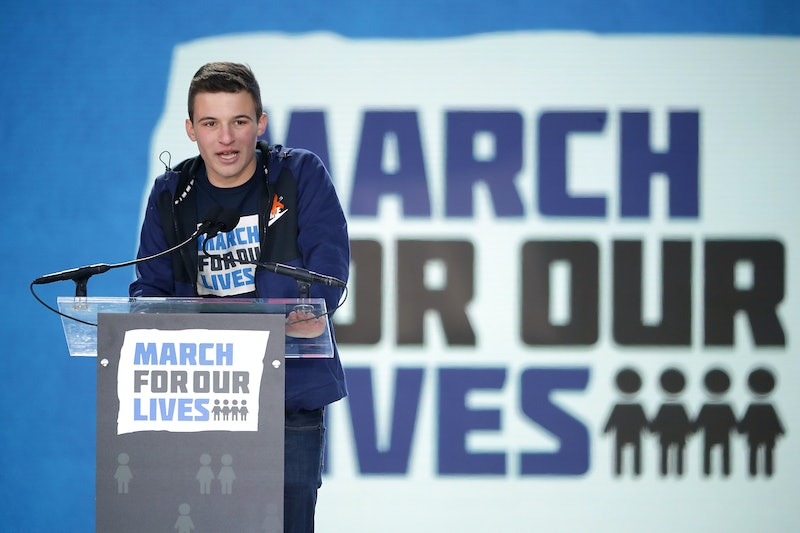 It looks like two political worlds might be colliding in the near future: Parkland activist Cameron Kasky and Michael Avenatti might be working together on a project, if their joint tweets are taken at face value. Both of the men tweeted about a meeting they had with one another on Aug. 21. It's unclear what they were meeting about, though Kasky promised "big things in the works."

Kasky was the first to tweet a picture of his meeting with Avenatti, who is currently working as a lawyer for Stormy Daniels in her lawsuit against the president. In addition to the picture of the two of them, Kasky wrote, "Just spent the evening with the man, the myth, the legend, @MichaelAvenatti. Big things in the works!"

In response, Avenatti tweeted back three minutes later, "Good to meet you. And I look forward to us working together."

Given that Avenatti is currently working as a lawyer in a high profile case against the president, the biggest speculation around these tweets might be whether Avenatti is going to work with Kasky on a legal matter. And given that Kasky is a notable activist in the wake of his experience enduring the Parkland shooting firsthand, it's possible that Avenatti could be working with Kasky on legislation related to guns.

Of course, none of that is confirmed yet, and though both men alluded to working together in the future, they remained pretty tight-lipped about what that partnership might look like.

In addition to meeting with Kasky on Tuesday evening, Avenatti had a packed day after former Trump lawyer Michael Cohen pled guilty to a series of charges that included bank fraud, tax evasion and campaign finance violations.

Of the guilty plea, which confirmed the role Cohen played in paying Daniels a $130,000 hush-money payment, Avenatti said on MSNBC, "[Daniels] has been vindicated this afternoon. I have been vindicated based on what we have...and I applaud her courageousness and her fortitude in coming forward. I think a lot of this stems from her courage and what she was willing to come forward and do."

Avenatti then confirmed that he plans to move forward "as aggressively as possible" with the lawsuit.

As for Kasky, he's been busy over the last few months as well, most recently announcing the release of a book with several other Parkland students earlier this summer. The book will be released in October and is titled, "Glimmer of Hope: How Tragedy Sparked A Movement."

To People, Kasky said of the book, which is a compilation of first-person essays as well as summaries of policy initiatives that March For Our Lives supports, “I hope the people reading it can overcome the helplessness that we felt. [The March For Our Lives] was a response to the fact that we felt helpless and destroyed. The only thing that we could do was make something that would help make the world a better place — it was a lifeline.”

For now, both Kasky and Avenatti seem to have their hands full with their own endeavors, though the world is no doubt waiting to see what they team up on.