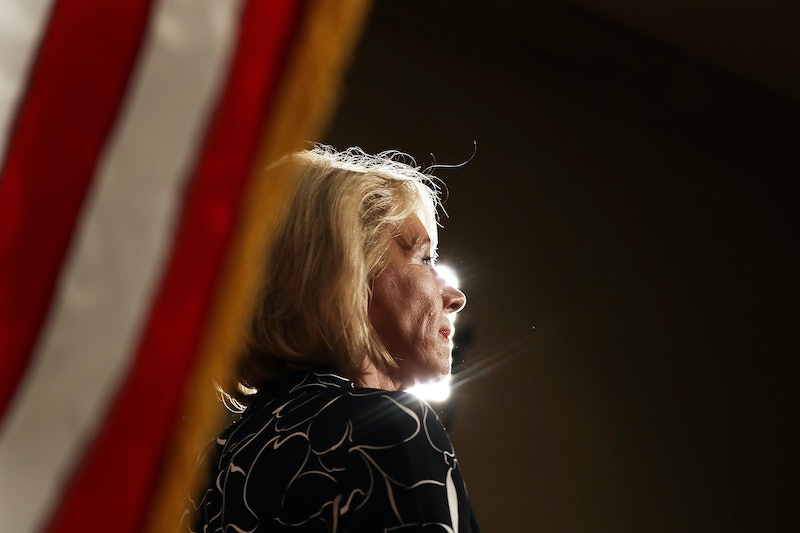 Students have expressed disappointment with Betsy DeVos after the education secretary visited Marjory Stoneman Douglas High School in Parkland, Florida, on Wednesday. While DeVos told reporters she'd met with and was even shadowed by some students, a number of Parkland students say DeVos barely responded to their questions and didn't meet with near as many of them as she implied.

Although DeVos' visit to Stoneman Douglas High School was closed to the media, the education secretary answered a few questions during a press conference that reporters said ended rather abruptly and revealed few specific details about visit. Video of DeVos' press conference shared online by James LaPorta of the Daily Beast showed DeVos told reporters she'd been accompanied by Parkland student journalists during her visit and had spoken with "a small group of students that are having a particularly tough time." A readout of the visit provided by DeVos' office also noted "the school newspaper reporter, broadcasting student, and yearbook photographer accompanied the secretary throughout the visit."

However, a few students, including an editor on the school's student newspaper, have taken to social media to dispute those claims. A Twitter user who identified herself as an editor for Stoneman Douglas' student newspaper pushed back on DeVos' claim that student reporters had followed the education secretary throughout her visit. Rather, that Twitter user claimed one student from each of the school's three student-run publications had been allowed to "see" and "take pictures" of DeVos but that no one had followed her. She also claimed DeVos did not meet or speak with students during her visit.

In a tweet posted in reply to DeVos on Twitter, Parkland student Aly Sheehy accused the education secretary of using her visit to the school as a publicity stunt and avoiding students' questions. Another Twitter user identifying herself as a Parkland student alleged DeVos talked with just three people during her visit.

But in her own account of her visit, DeVos appeared to imply she'd met and spoken with a number of Parkland students. In the brief press conference she held after her visit, DeVos told reporters she'd "heard a variety of things from the students" she'd spoken with, adding that "some of them are doing quite well but they all acknowledge it's a day-to-day situation."

The education secretary also said she'd spoken to "a small group of students that are having a particularly tough time." she said their faces had "lit up" when she'd asked them about the comfort dogs working to help students, faculty, and staff during the transition back to full-time classes. When asked by one reporter what students had told her about proposals to arm teachers, DeVos said "we didn't have a conversation about that." It remains unclear how many students DeVos actually spoke with during her visit.

This is not the first time students have expressed frustration with DeVos. Last year, a number of students from schools in Idaho's Treasure Valley walked out of school in protest of DeVos' appointment by President Donald Trump.

Interestingly, DeVos refrained from discussing any specific gun control policy proposals during her press conference. The education secretary did, however, take a moment to applaud the students who have become vocal advocates for stricter gun control after 17 people were killed when a former student opened fire at Stoneman Douglas High School last month. "I give a lot of credit to the students here who have found their voices and encourage them to continue to speak out about finding those solutions and having adults pay attention," DeVos told reporters. "They have a lot of really important and worthwhile things to say."