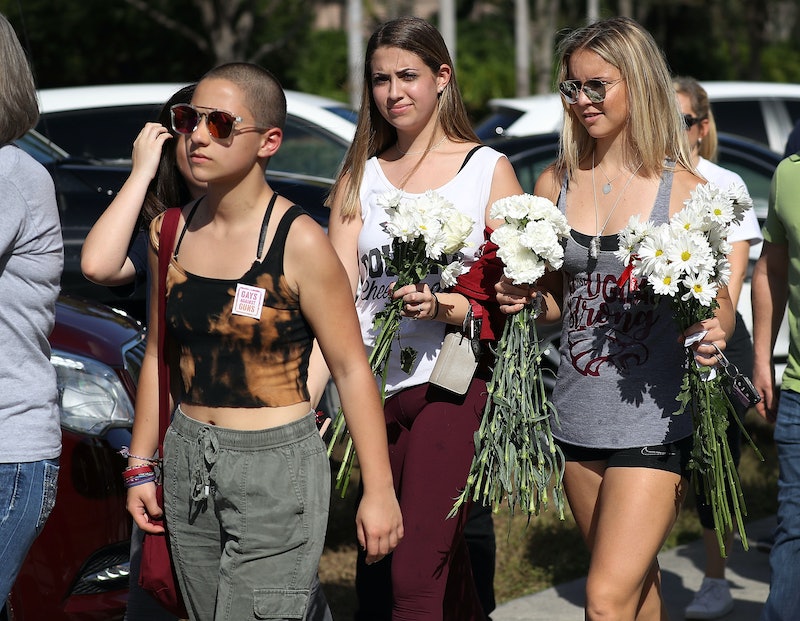 On Monday, Harper's Bazaar published an article by Parkland survivor Emma Gonzalez — who says Americans have become complacent in "a senseless injustice that occurs all around them." She chastised the adults who have refused to take action to promote gun control and make schools safer. And at the same time, she also suggested ways in which everyone can step up to ensure that school shootings, like the one in Parkland, Florida, never happen again.

18-year-old Gonzalez has become a prominent gun control activist in the wake of a Valentine's Day shooting at her high school, Marjory Stoneman Douglas, which killed 17. She first captured international attention after giving an impassioned 11-minute speech at an anti-gun rally in Fort Lauderdale, Florida, several days after the shooting. And since the shooting, she and her fellow students have continued to demand stricter gun control. They've even organized the "March for Our Lives" on March 24 in an effort to push legislators to finally act.

In her piece for Harper's Bazaar, Gonzalez opened by listing a variety of her personal characteristics and hobbies, but then added that "none of this matters anymore. What matters," she noted, "is that the majority of American people have become complacent in a senseless injustice that occurs all around them."

Gonzalez implored Americans to step up their efforts to promote gun control and keep schools safer. First, she delineated the types of gun control measures she believes people should be supporting. As the student described, she is not calling for eliminating gun ownership but, rather, believes guns should simply be harder to obtain in the United States. She pointed out that people should have to "go through more rolls of red tape" to acquire guns and that "military-grade weapons should not be accessible in civilian settings."

The high school student also noted that she does not want people to advocate for educators to be armed, something which President Trump has suggested in a series of tweets following the Parkland shooting. Gonzalez pointed out that arming teachers is not a part of their job description, and, if people really want to assist schools, they should "arm them with school supplies, books, therapists, [and other] things they actually need and can make use of."

Gonzalez also called for increased mental health care for those who need it, though she did point out that gun violence and mental illness are not directly correlated. However, as Gonzalez put it, when mental illness and gun violence "go hand-in-hand, Americans — often children — lose their lives."

The teenager implied that Americans should advocate for a type of gun control that reflects these points: one that makes guns harder to obtain, that does not arm teachers, and that does not blame gun violence on mental illness, but does offer assistance for mental health care. According to Gonzalez, advocating for this type of gun control will "relieve the NRA of its talking points, once and for all."

She proposes that Americans can participate in this advocacy by taking part in the aforementioned March for Our Lives on March 24 (they can also donate to the march). Moreover, Gonzalez also encouraged Americans to register to vote and to make sure they actually go to the polls when election time rolls around — and vote for officials who will take the above-described measures to ensure that students, and all Americans, are safe.