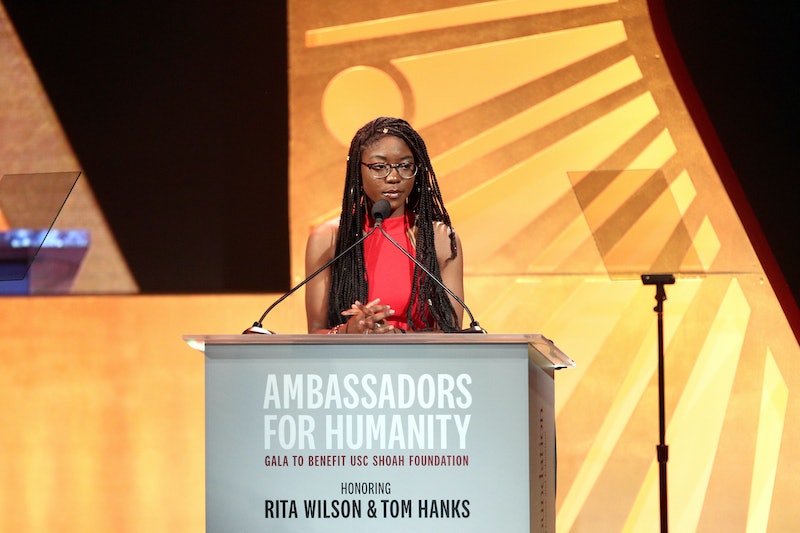 Just in time to wrap up 2018, comedian Louis C.K. mocked the survivors of the Parkland shooting during a set at a comedy venue in Long Island, including calling their advocacy on gun control "not interesting." Moms Demand Action founder Shannon Watts shared audio of C.K.'s set on Twitter on Sunday night, according to The Daily Beast.

The ostracized comedian began the joke by recounting how disappointed he was that he doesn't get to tell the younger generation to get their act together in his old age. "I was kind of excited to be in my 50s and see people in their 20s, and be like, 'You're crazy! These kids are nuts!' They're just boring," C.K. said. "Why aren't you finger-f*cking each other and doing jello shots?"

Then, he took aim at the Parkland shooting survivors. "Testify in front of Congress, these kids, what the f*ck? What are you doing? You're young! You should be crazy! You should be unhinged, not in a suit! You're not interesting 'cause you went to a high school where kids got shot, why does that mean I have to listen to you?" C.K. asked. "Why does that make you interesting? You didn't get shot. You pushed some fat kid in the way and now I gotta listen to you talking?"

Survivors of the shooting and the parents of the victims told The Daily Beast that C.K.'s jokes were tactless. Fred Guttenberg — a father who took up gun control advocacy after his 14-year-old daughter was killed at Stoneman Douglas High School — said the comedian's jokes were "vile and gross," according to The Daily Beast.

"Louis C.K. is someone who failed because of abusing people in the past," Guttenberg said in an interview with the online publication on Monday, "and to try and make a comeback by abusing families like mine only makes him pathetic, disgusting, vile and gross, and he ought to go back to the hole he's been hiding for the past two years."

Parkland survivor Aalayah Eastmond tweeted about C.K.'s set and referenced the stories of his sexual harassment, according to CNN. "Since you like making fun of me and other Parkland survivors behind closed doors, I'm right here if you want to talk. Just try to keep it in your pants, ok?" Eastmond wrote.

Kyra Parrow, another Parkland survivor, tweeted in response to C.K.'s set. "Although taking jello shots & eating mushrooms might have been ideal for you when you were 18, that is not the luxury that we have after having to see our friends and classmates in caskets because of preventable gun violence," Parrow tweeted.

Tony Montalto, another father whose daughter was shot and killed at Parkland, told The Daily Beast that he understood C.K.'s job is "bring levity to the world" but that C.K.'s set missed that mark.

"I feel that it's definitely too soon for such comments. The surviving students should be applauded for their ability to speak out and express themselves," Montalto told The Daily Beast. "The reason they have a voice is because my daughter and 16 other beautiful souls were lost that day. And to pick on those students minimizes the loss of those 17 families."

Governor's Comedy Club owner James Dolce told CNN that he would be booking C.K. again after the six sold-out shows over the last two weeks. "People love him. The crowds love him. He played to standing ovations for all six shows," he said. "He'll be back. I don't know exactly when, but without a doubt."

More like this
Bustle Daily Newsletter: October 6, 2022
By Hayley Schueneman
The Real Reason Your Instagram Story Viewers Show Up In That Order
By Emma Carey
What Are The 7 Types Of Rest? Experts Explain
By Carolyn Steber
How Alexia Del Valle’s Latinx Roots Influence Her Content
By Alexis Morillo
Get Even More From Bustle — Sign Up For The Newsletter