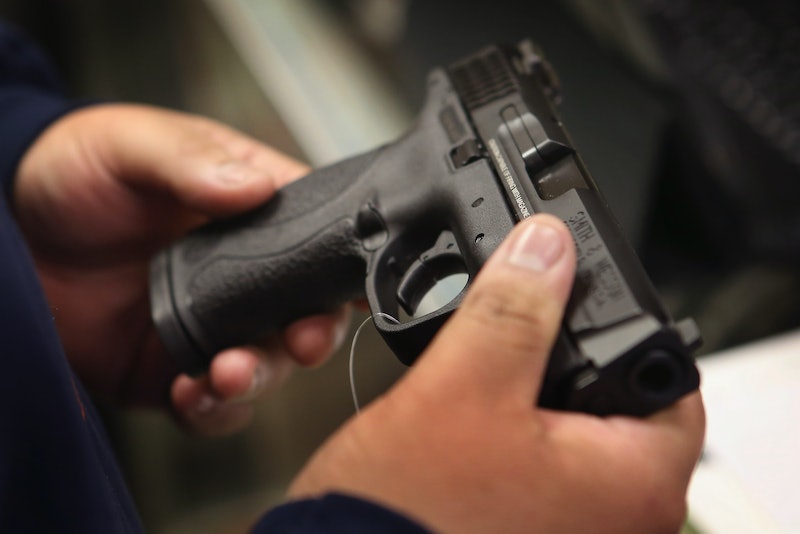 Less than two months after a gunman killed 17 people at Parkland, Florida's Marjory Stoneman Douglas High School, a Parkland teacher left his loaded gun in a bathroom. Sean Simpson is a chemistry teacher at Marjory Stoneman Douglas; he recently garnered media attention after saying that he would be willing to arm himself at school. On Sunday, he left his loaded Glock 9mm in a men's bathroom at Deerfield Beach Pier, after which someone found it and fired a shot.

According to the Miami Herald, Simpson was charged with failing to safely store a firearm, which is a second-degree misdemeanor. The maximum punishment for this misdemeanor is 60 days in jail. Simpson was released after he posted a $250 bond. The arrest report for the incident indicated that Simpson told a deputy he had forgotten the gun after finishing up in the bathroom, CBS Miami reported. Simpson was reportedly going back for it when he heard a shot go off. He found 69-year-old Joseph Spataro holding the firearm, and then promptly grabbed it away from the man.

Although Simpson has expressed his willingness to arm himself on campus, a local ABC channel reported that he has also been an advocate of Parkland students' demands for stricter gun control legislation. According to Local 10, a Broward County School Board spokesperson said it will likely not take any disciplinary action against him. Meanwhile, Spataro was charged with trespassing and firing a weapon while intoxicated, The Hill reported.

Local 10 also reported that deputies later located the bullet inside the concrete structure that houses the bathroom. The bullet did not strike anyone, according to the arrest report for Simpson. However, deputies wrote in the arrest report that the incident could have been much more severe.

Simpson carries a concealed weapons permit, according to CBS News, but he will likely not have to have arm himself on campus — Broward County Public Schools this week voted against arming teachers. Though Simpson appeared open to the idea of arming teachers after Donald Trump proposed it, he told MSNBC after the Parkland shooting that he also believes that more action on guns is necessary.

"I know there are some of us that are willing to take the training if it was offered and probably be another line of defense," Simpson said at the time. "But again that is a complicated subject and I'm not sure if it's the answer. I think it's easier to get these types of weapons out of the hands of people that aren't meant to do anything but kill."

In other interviews following the shooting, Simpson has also described the Parkland students as "champions" of the gun control issue, and reflected on the fear he felt when the Feb. 14 shooting took place.

"I was running from the sound of gunfire ... in a high school I felt safe in," Simpson said. "That's not OK, that never should be a thing that could happen. ... These kids are demanding action, they're going to cause change."

During his interview with MSNBC, Simpson said he has challenged people who want to keep weapons by asking them, "what part of a well regulated militia are you?" and often received no response. But in his view, the students at Parkland and around the country who are fighting for gun control are going to have a significant impact.

"I think the fact our kids are old enough to articulate their opinions — they're right at voting age," Simpson told MSNBC. "A lot of kids are going to be voting in this election or the very soon thereafter. Their voice is going to be heard."

Simpson told Local 10 that leaving his gun in the bathroom likely did not constitute a violation of school board rules, and he will continue teaching at Marjory Stoneman Douglas.