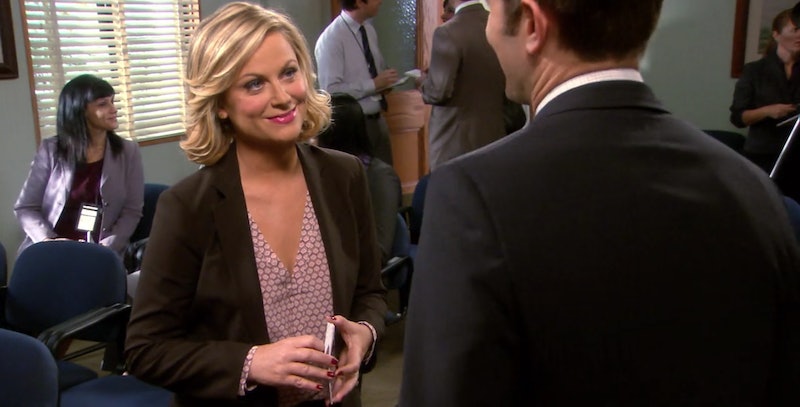 Li'l Sebastian may be "up in horsey heaven," but Parks and Recreation's legacy lives on. And come January, fans will have another way to watch the NBC sitcom's seven seasons. Comedy Central has acquired Parks and Recreation, Deadline reported Thursday. And the network is celebrating the news with an all-day Parks marathon on Jan. 21.

If you subscribe to Comedy Central, you'll be able to tune in for the marathon, which falls on Martin Luther King Jr. Day — convenient if you have the day off and are looking for a show to marathon. And for cord-cutters, the acquisition is still good news: Parks and Recreation episodes will be available to stream on Comedy Central's app and website, Vulture reports. Before the Comedy Central acquisition news broke, Parks has been available to stream on Netflix for years. And as The Hollywood Reporter points out, Parks and Recreation is also available on Hulu and Amazon Prime, and its reruns have aired on E! and FXX.

Netflix didn't immediately respond to Bustle's request for comment as to whether the show will be leaving the streaming service after the Comedy Central news goes into effect. But the show hasn't appeared on any official lists of what programming is leaving Netflix, so it sounds like it's safe, at least for now. Still, it doesn't hurt to revisit some of your favorite episodes on Netflix in the next month if you're not a Comedy Central subscriber.

When Deadline first announced the news, fans were quick to respond with GIFs from the show to share their excitement.

Some people, though, thought MLK Day wasn't the best time to marathon the show.

As several outlets have pointed out, this isn't Comedy Central's first acquisition of a show's previous episodes. The network also has the rights to Bojack Horseman repeats, as well as older shows like The Cleveland Show and King of The Hill, THR noted.

And even though Netflix hasn't commented on the news, there's another reason fans shouldn't be too worried. Comedy Central also has reruns of The Office, THR notes, and that show is still available on Netflix. So it seems likely that Comedy Central will just be another way fans can catch up on the beloved series. And there's nothing wrong with having more options.

2019 is a great year for the acquisition, too. It marks 10 years since the show premiered on NBC. And the show has continued to delight fans years after its finale in 2015, so what better way to mark its anniversary than by making it available through another platform?

It's hard to name just one episode or moment that Parks was so memorable, but it's not hard to see its legacy. Chris Pratt and Aziz Ansari starred on the show long before they became household names. And amid all of the waffle-fueled silliness, there was plenty of heart behind Leslie's determination to help the Pawnee community. Plus, of course, Parks gave fans one of the best TV weddings, ever.

Thanks to Comedy Central, there are even more ways to look back on some of Parks' funniest and most heartfelt moments. That sounds like the perfect way to ring in the new year to me.